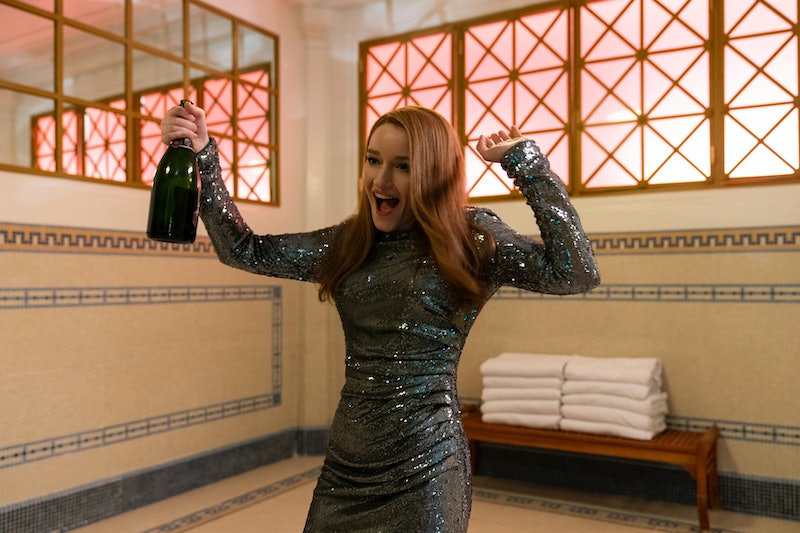 Netflix’s Inventing Anna starts every episode by telling the audience: “This whole story is completely true, except for all the parts that are totally made up.” So, you’d be forgiven for being a little confused as to what’s real and what’s not. As we know, the show is based on the now-infamous article published by New York Magazine’s The Cut, titled “How Anna Delvey Tricked New York’s Party People.” Penned by journalist Jessica Pressler, whose on-screen counterpart features heavily in the Netflix series, the article told the true story of Russian-born fraudster Anna Delvey (real name Anna Sorokin) who, whilst presenting herself as a German heiress, scammed New York socialites out of thousands of dollars. But how accurate is Netflix’s dramatisation of Pressler’s article? Find a fact check of some of Inventing Anna’s major characters and storylines, below.

Did Jessica Pressler have a baby?

Vivian Kent (played by Anna Chlumsky) is based on real-life journalist Jessica Pressler. In the series, Vivian is pregnant while working on the Anna Delvey story for the fictional Manhattan magazine. “I was super pregnant while reporting that story,” Pressler revealed to Vulture, adding that Vivian’s trip to Germany in the show also really happened. Although, she “definitely did not try to break into anyone’s home.”

Pressler also confirmed that, similarly to Vivian, her The Cut editors pushed back on her Anna Sorokin pitch. However, she didn’t have to fight quite as hard as her onscreen counterpart. “It was definitely not exactly the way it was on the show,” Pressler divulged.

However, much like in the series, Pressler really did lend Anna clothes for the trial. Although, ScreenRant notes that Pressler never convinced Anna to actually go to trial, as hinted in the Netflix drama. The “murder wall” in Vivian’s nursery is also a work of fiction. “To be clear, there wasn’t a murder wall. I had a spreadsheet,” quipped Pressler.

Did Anna Sorokin go to jail?

As portrayed in the drama, Anna Sorokin (known to her pals as Anna Delvey) was accused of defrauding New York’s elite out of thousands of dollars. She was convicted and sentenced to four years in prison in 2019, but was issued an earlier release date due to good behaviour.

One Inventing Anna plot line centres on accusations that Delvey once stole a plane. As USA Today reports, this is technically true, although not quite as dramatic as it sounds.

In reality, Sorokin booked a $35,000 plane through a company called Blade, after becoming friendly with the CEO. She the submitted a forged confirmation for a bank wire transfer — and never paid the amount. “We felt she was good for payment, so we booked her for the flight,” Blade's chief financial officer, Kathleen McCormack, said during Sorokin's trial, per Rolling Stone.

The Netflix drama also shows Sorokin declaring that she was not sorry about her alleged crimes. However, the show fails to depict Sorokin’s parole board hearing in 2019, whereby she declared she was “really ashamed and really sorry,” the New York Post reported.

As for Delvey’s accent in the show, the real-life Sorokin isn’t fully convinced by its accuracy. “I think she kind of falls in and out of it. Some of it she gets right — but not everything,” Sorokin told Insider.

Inventing Anna’s sixth episode details Vanity Fair photo editor Rachel DeLoache Williams’ Moroccan vacation with Delvey, during which she convinced Williams to charge $62,000 to her credit cards, and never paid her back.

As hinted in the show, the real-life Williams did go on to write a memoir, titled My Friend Anna, about her relationship with Sorokin. In the book, Williams revealed she eventually assisted police in Sorokin’s arrest. “Was I afraid that she would discover my involvement in her arrest? Most definitely,” Williams wrote.

In the show, Delvey’s defense attorney, Todd Spodek (played by Succession’s Arian Moayed), quotes the Frank Sinatra classic “New York, New York” in his opening speech. As it turns out, this really did happen. “Sinatra made a great new start here in New York, as did Ms. Sorokin,” the real Spodek argued, per The New York Times. Spodek did not represent Sorokin for free, however, nor did a journalist help him with the case, as the series implies.

More like this
This First Look At 'The Gold' Shows Jack Lowden In A Whole New Light
By El Hunt and Sam Ramsden
A New Netflix Doc Will Explore The Unsolved Murder Of Jill Dando
By Sam Ramsden
Twitter Is Burning As Phoebe Dynevor Reveals Daphne’s 'Bridgerton' Exit
By Sophie McEvoy
Helena Bonham Carter Doesn't Think 'The Crown' “Should Carry On"
By Sam Ramsden
Get The Very Best Of Bustle/UK
Sign up for Bustle UK's twice-weekly newsletter, featuring the latest must-watch TV, moving personal stories, and expert advice on the hottest viral buys.