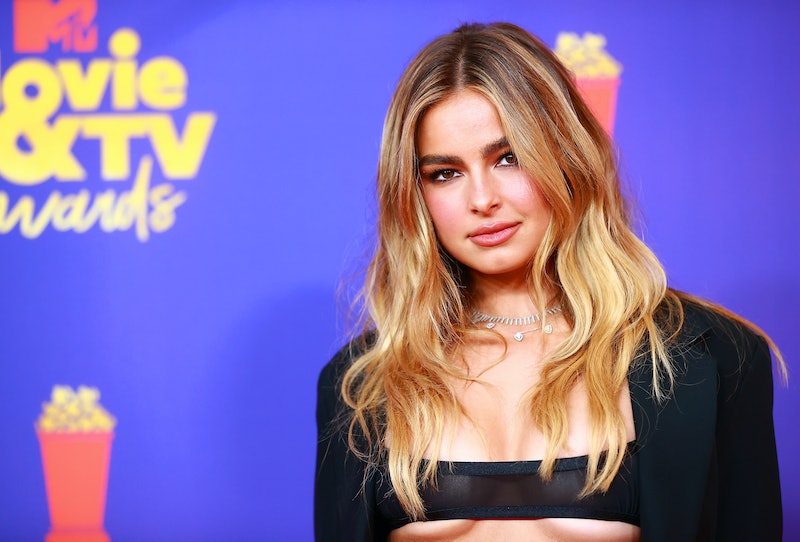 Confirmed: Addison Rae ships Kourtney Kardashian and Travis Barker just as much as you do. On Sunday, May 16, the TikTok star attended the MTV Movie & TV Awards and gushed over the Keeping Up With the Kardashians star’s current relationship on the red carpet. “I’m obsessed,” she told ET. “I’m obsessed. I love Kourtney and I love Travis, they’re both amazing people and I wish them the best, they’re so cute.”

She’s right, the Poosh founder and the Blink-182 drummer do make a cute couple. They were first linked in January and Kardashian took to Instagram roughly a month later to confirm their relationship with a hand-holding photo on Instagram. Since then, the musician has gotten several tattoos in the reality star’s honor. In fact, Kardashian shared a series of images last week of her giving Barker his latest tattoo, which says “I love you” in her handwriting.

Kardashian and Barker are also known for sharing NSFW photos and videos of their relationship on social media. In late April, for example, the pair went on a steamy desert vacation together. “Anywhere with you,” Barker captioned his post, which included a photo of his hand caressing the 42-year-old’s bum. “EVERYWHERE,” Kardashian responded in the comments. She also posted photos of her own. “Just like heaven,” she wrote alongside a photo of her kissing the drummer with her legs wrapped around him.

Given their intense social media PDA, it probably comes as no surprise that the two have reportedly discussed tying the knot. “Kourtney and Travis are in love and have talked about their future and the possibility of getting engaged and married,” a source told ET on Tuesday, May 4. “Kourtney hasn’t felt this strongly about anyone in a while and can see a forever with Travis.” Bustle reached out to Kardashian’s reps for comment but hasn’t heard back.

If marriage is in the future for the KUWTK star and her rocker boyfriend, they have Addison Rae’s full support. The TikToker has long been vocal about her close friendship with Kardashian and told Us Weekly that she was “thankful” for the family’s help amid her meteoric rise to fame. “The advice I have gotten from hanging around people who have spent time in the spotlight is to always be humble and grateful for all that I am given because I am in a really fortunate position,” Rae said. “I’m truly thankful for the platform my followers have given me.”

Kardashian and Rae became fast friends in March 2020 thanks to YouTube star David Dobrik, who surprised Kardashian’s son with a visit from Rae to help him kick off his own TikTok account. “We surprised Mason, because Mason liked my videos on TikTok,” Rae said on The Tom Ward Show in July 2020, adding that she “stuck around” and got “really close” to the reality star. “We started working out together,” she said.

In September 2020, the influencer gushed over their friendship again in an interview with ET. “I feel like friendships can range from any age and I feel like everyone can relate to people in different ways,” she said at the time, nodding to her and Kardashian’s 21-year age gap. “Kourtney and I just happen to have a great friendship, which is really fun. She’s been a great person to have in my life. She said in my YouTube video that I had great energy that she liked to be around. I think she has great energy as well, and she has so much experience in her life that I can really just look at and kind of learn from.”

More like this
Kourtney Kardashian Claps Back At Pregnancy Speculation On Instagram
By Jake Viswanath
Who Is Nick Cannon Dating & How Many Kids Does He Have?
By Jordyn Tilchen and Radhika Menon
Khloé Kardashian Is Reportedly Dating A Private Equity Investor She Met Through Kim
By Jordyn Tilchen and Jake Viswanath
How To Apply For 'Survivor' & Tips On How To Get Cast
By Meg Walters
Get Even More From Bustle — Sign Up For The Newsletter