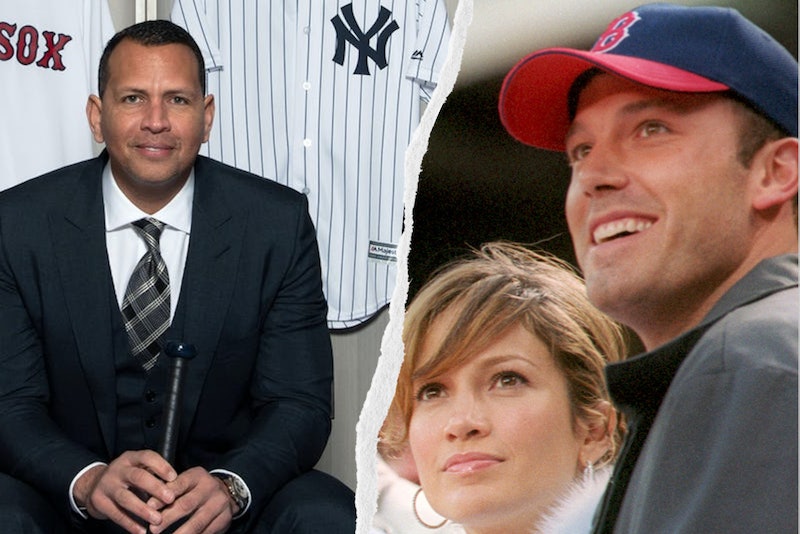 The Bennifer saga heated up this week with revealing reports that Ben Affleck had been writing love letters to Jennifer Lopez since February — even though J.Lo and Alex Rodriguez didn’t announce their split until April — and that A-Rod was apparently “upset” about the rekindled relationship. Now, the world finally gets to know how the retired baseball player and businessman feels about everything, in his own words instead of sources around him.

“Go Yankees,” Rodriguez responded outside a Miami restaurant on May 11 when asked by Page Six about Jen and Ben’s recent vacation to Montana, where they spent time together at the private Yellowstone Club in Big Sky. The 45-year-old former MLB star played for the New York Yankees from 2004 to 2016 during which time he won two American League MVPs and a World Series championship.

Affleck, 48, is an avid Boston Red Sox fan, so A-Rod’s “Go Yankees” comment is more than likely him comparing the storied rivalry between the two teams to his rivalry with Affleck to win over J.Lo’s heart. However, according to an E! News source, 51-year-old Lopez is “not interested in rekindling anything with A-Rod and is done” and Rodriguez is “saddened” by Bennifer’s reunion. “A-Rod is shocked that J.Lo has moved on,” the source added. “He truly thought they would be able to make it work and reconnect. He has been reaching out to J.Lo trying to meet with her, and she has been very short with him.”

Rodriguez and Lopez, who had been dating since 2017 before calling off their engagement, announced their breakup in April with a joint statement: “We have realized we are better as friends and look forward to remaining so. We will continue to work together and support each other on our shared businesses and projects. We wish the best for each other and one another’s children. Out of respect for them, the only other comment we have to say is thank you to everyone who has sent kind words and support.”

The pair’s love story began in 2017, and they seemed destined to become Met Gala staples together for years to come. In their first year together, they made waves at the Met Gala and traveled to Paris. In the years until they split in 2021, they attended many more red carpets, award shows, and sporting events. In one of their last high-profile sightings as a couple, Rodriguez supported Lopez as she performed at Joe Biden and Kamala Harris’ inauguration in January 2021.

Meanwhile, Bennifer’s relationship timeline dates back to 2001, when J.Lo first met Affleck on the film set of Gigli. They started dating in 2002 and got in engaged in 2003. But the day before their wedding in September 2003, they called off their engagement “due to the excessive media attention.” They officially broke up in 2004. Now, 17 years later, their friendship and relationship has rekindled in 2021. The world is watching to see what happens next. For now, “Go Yankees” or “Go Red Sox,” depending on which team you’re rooting for.