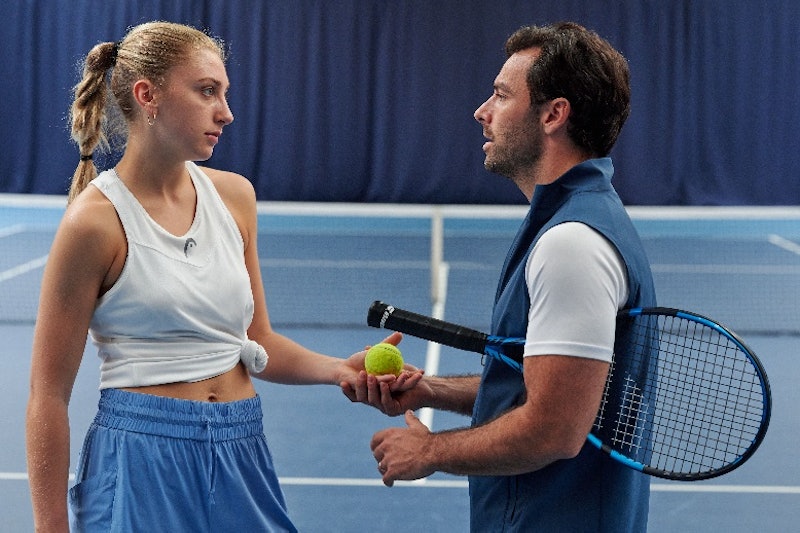 As anybody who’s ever watched Wimbledon can attest to: tennis can make for high drama. Turning their attention from bent coppers to break points, Line Of Duty producers World Production seem to understand this all too well, and their upcoming new drama, Fifteen-Love. Set inside the tensely competitive world of professional tennis and Grand Slam battles and starring a cast of recognisable faces, the show taps into a current surge in discussion around women in sport, explains creator Hania Elkington. “The voice of women in sport has never been heard as loudly and clearly as over the last two years. From Simone Biles to Naomi Osaka, Emma Raducanu to Pam Shriver, the pressures and realities of being at the top of your game on the world stage are finally breaking through to us, making us look again at the price our young prodigies can pay for the goals they work so hard to achieve.” Intrigued? Us too. Here’s everything we know about Fifteen-Love so far.

The story of Fifteen-Love hinges on the story of prodigious young tennis pro Justine Pearce, who suffers a devastating injury just as she’s on the cusp of achieving Grand Slam glory aged 17, and makes it to the semi finals of the French Open alongside her coach, Glenn Lapthorn. Five years later, when Pearce is working as a therapist at her old tennis academy, she goes public with a serious allegation against her former coach and tennis partner.

“Justine and Glenn’s battle over the truth of their past reaches new heights as they both seek glory at the Grand Slam grass court event of the year, and the stately world of professional tennis is rocked by lies, deceit, and a desperate bid for control,” reads the official synopsis. “Examining the intense physical and mental pressures of professional sport, Fifteen-Love is a gripping and sensitive exploration of trust, power and obsession, and what can be lost when you’ll do anything to win…” Gripping, eh?

“Writing this drama, and the people I’ve met through my deep-dive into researching it, has been revelatory,” added Elkington. “I hope that Fifteen-Love has the same effect on its audience, and can become another valuable part of this urgent, emerging story.”

Leading the line-up is newcomer Ella Lily Hyland, who plays Justine Pearce. “Being a part of this story is such a dream and an honour,” the Irish actor wrote in an Instagram post when the casting was revealed. ”I’m so glad this story is being told, and cannot wait for you all to see it.”

Currently shooting at an east London studio, Amazon have confirmed the show will arrive at some point in 2023 – with “further information…released in due course.”