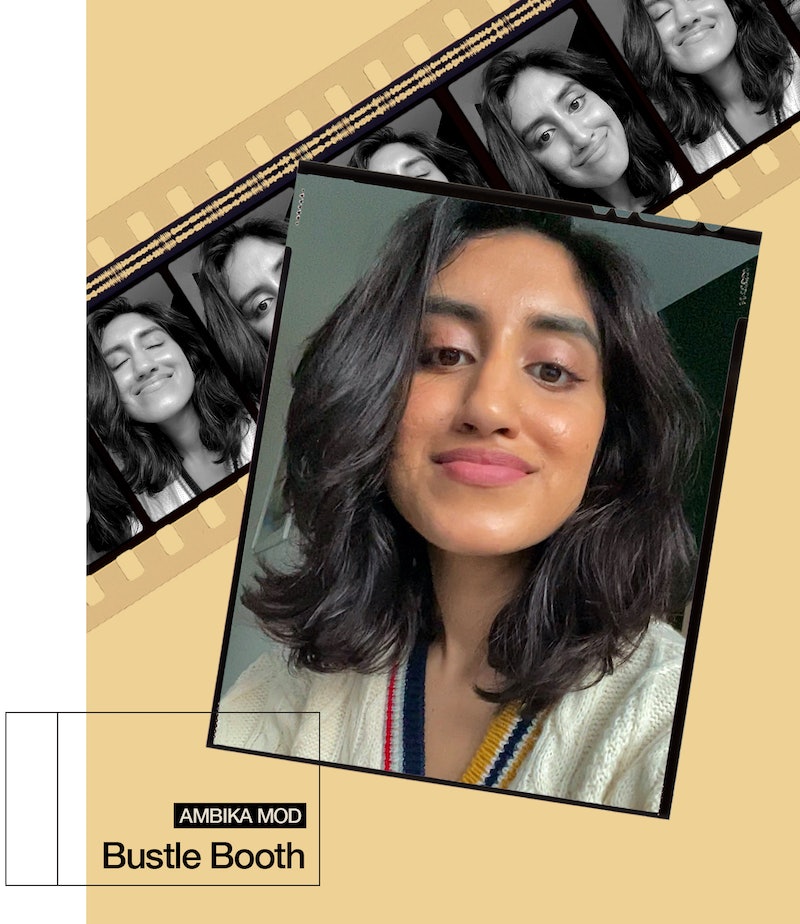 Ambika Mod knows a thing or two about timing. She is a comedian, after all. But “right time, right place” is something of a running theme in her career thus far. (That and a lot of hard work, that is.)

“It was something of an accident,” she laughs, reminiscing on how she stumbled upon her university comedy society. The sketch troupe in questions – The Durham Revue – is no stranger to catapulting its members into the comedy world post-graduation: think Nish Kumar (The Mash Report), Ed Gamble (Almost Royal), and Alex MacQueen (The Inbetweeners), to name but a few. And though despite growing up admiring comedic powerhouse like Tina Fey, Amy Poehler, and Mindy Kaling, it wasn’t until recently that Mod connected her love for acting with her love for comedy.

Starting in comedy was hard. “Really, really hard,” she emphasises. And then lockdown made it even harder. Like many comedians across the country, Mod’s live gigs cancelled in the blink of an eye, sending her spinning into what she calls an “existential crisis” about her career. Until the universe stepped in.

“I had this month of calm where I stopped worrying about it and out of nowhere this tape came to me,” she says with a smile. “This sounds really wanky, but I feel like the universe brought it to me,” she laughs. She is, of course, talking about her next – and arguably biggest – gig yet: starring opposite Ben Whishaw in the BBC adaptation of This Is Going To Hurt. As trainee doctor Shruti, Mod found herself (literally and physically) deep in the belly of the NHS.

“Me and Ben had a crash course in Obs & Gynae. We’re both pretty confident we could do a C-Section if we needed to,” she jokes. “It’s not like other medical dramas you’ve seen before, though,” she warns of the show, which is inspired by Adam Kay’s brutally honest memoir. “It’s really gritty; warts and all. It’s about the way [the NHS] is run, underfunded, overworked, underpaid, stretched thin on a daily basis.”

But Shruti means so much more to Mod, too. “It’s just so rare to see a well-written, young South Asian woman who has a really interesting arc,” she tells me. “She doesn’t exist for other characters, or the plot, and it’s sad to say but it’s true: you don’t see a lot of parts like that.”

Beyond the BBC drama, Mod is looking forward to ticking things off her comedy bucket list. After two years of delays, her comedy duo, Megan from HR, is hoping to perform at Soho Theatre. Given her newly acquired taste for big-time acting though, I wouldn’t be surprised to see her back on screen very soon.

Get to know more about Mod in her Bustle Booth questionnaire below.

I don’t drink coffee but accept and respect it as an umbrella term for all hot beverages. Imagine asking to meet up with someone for an herbal tea or hot chocolate, literally how embarrassing

Finsbury Park, St Albans, Waterloo. I don’t live in any of those places, I just wanna see how they’re doing

I’m actually watching the first season of Heroes, 15 years late. But it is 12/10. Save the cheerleader. Save the world.

Not sure if idol(?) is the right word but I would die for Taylor Swift..

First Dates, if only just to see who they put me with. And not a reality TV show, but I would love to go on Taskmaster!

“We Didn’t Start the Fire” by Billy Joel. Don’t need the lyrics.

What advice would you give your younger self?

It’s all going to be okay. I’m quite a hypersensitive person but sometimes it’s just not that deep… Oh, and not to cut your hair really short at the age of 14. That was a big mistake.

Life has been a bit insane and surreal recently but people have been nothing but kind and excited and supportive. It’s really life-affirming to be reminded that most people genuinely want the best for you, even if you don’t feel you deserve it all the time.

That I’m a woman in STEM (scared, tired, exhausted, mlazy).