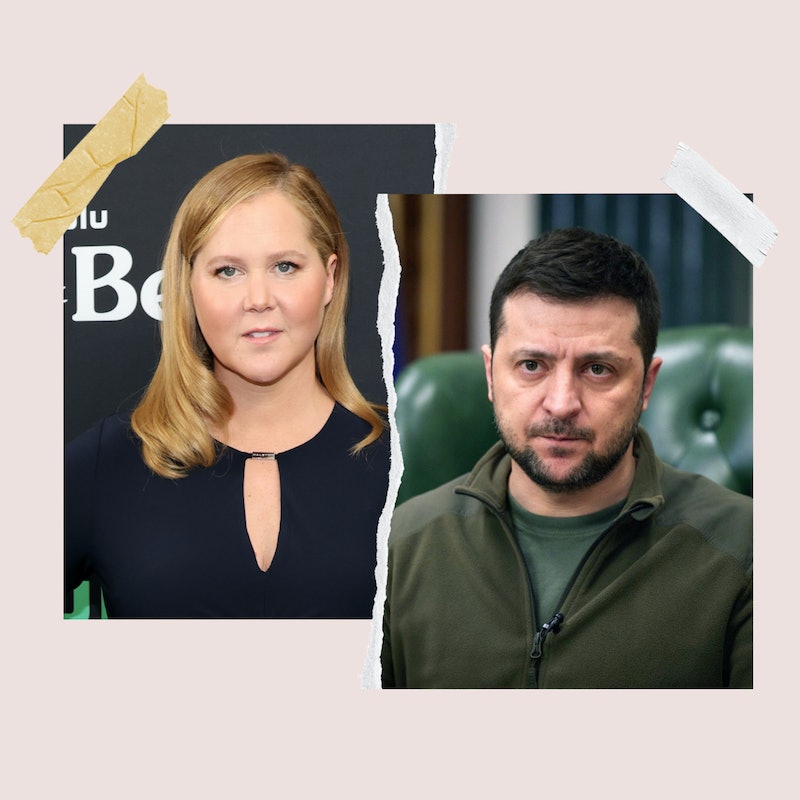 Amy Schumer knows that millions will tune in when she co-hosts the Oscars, which is why she thinks that Ukrainian President Volodymyr Zelensky should get some airtime. In an upcoming appearance on The Drew Barrymore Show, Schumer said that she wanted to give Zelensky a moment to address viewers as Russia continues its invasion of Ukraine. But unfortunately, it’s not her decision.

“I actually pitched, I wanted to find a way to have Zelensky satellite in or make a tape or something just because there are so many eyes on the Oscars,” the I Feel Pretty star told Barrymore, according to Variety. “I am not afraid to go there, but it’s not me producing the Oscars.” Schumer also spoke about the challenges of balancing lighthearted moments with serious ones at the Academy Awards.

“I think there is definitely pressure in one way to be like, ‘This is a vacation, let people forget we just want to have this night,’ but it is like, ‘Well we have so many eyes and ears on this show,’” she said. “I think it’s a great opportunity to at least comment on a couple of things.” Schumer is set to host the show on Sunday, March 27, with Regina Hall and Wanda Sykes.

Although she didn’t reveal what exactly she has planned, Schumer said that she prepared some jokes that “highlight the sort of current condition.” “I mean, there are so many awful things happening that it seems hard to focus on which one,” she continued. And while it’s likely that she’ll mention the crisis in Ukraine, it doesn’t seem like Zelensky will be addressing the crowd.

Schumer isn’t the only celebrity who’s been trying to shed light on what’s happening in Ukraine. On March 3, exactly one week after Russia’s military invasion first began, Ashton Kutcher and Ukraine native Mila Kunis launched a GoFundMe campaign and have since raised nearly $35 million toward refugee and humanitarian aid efforts.

“@aplusk & Mila Kunis were among the first to respond to our grief,” Zelensky tweeted on March 20. “They have already raised $35 million & are sending it to @flexport & @Airbnb to help refugees. Grateful for their support. Impressed by their determination. They inspire the world. #StandWithUkraine.” He also thanked the A-list couple in a private video call.

Kunis and Kutcher, who pledged to match up to $3 million in donations with their own money, thanked those who donated to their campaign in an update posted to their GoFundMe on March 17. “Over $30 million raised and over 65,000 of you donated,” they wrote, adding that they are “overwhelmed with gratitude.”

“While this is far from a solve to the problem, our collective effort will provide a softer landing for so many people as they forge ahead into their future of uncertainty,” they added. “We want to say thank you so much for your continued support. This is just the beginning to a very very long journey.”