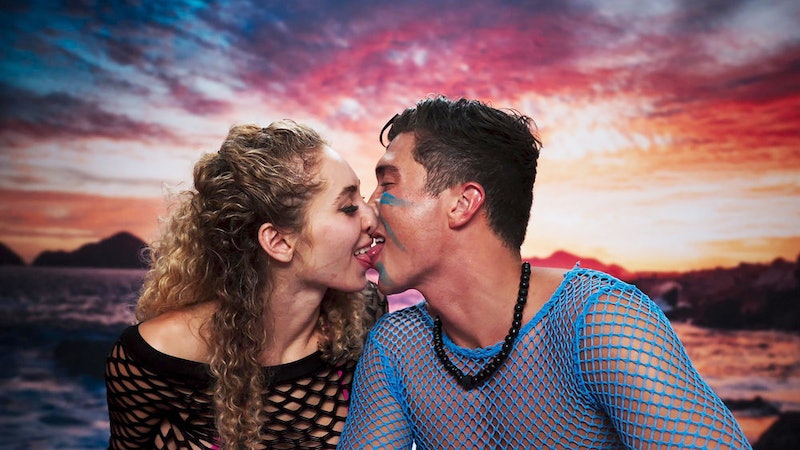 Several episodes into the fourth season of Temptation Island and the messiness continue to unravel. Though couples like Ash and Hania and Lascelles and Ashley have already seen their relationships seriously tested by the island’s singles, the latest scandalous love connection is developing between Gillian and Tommy. Obviously, the major reason the singles are there is to cause drama, but what happens when one islander actually begins to actually begins to catch feelings? Probably nothing good.

Gillian arrived on the island with her boyfriend of three years, Edgar. Usually, couples come on the show in an attempt to solidify their relationship, but that may not have been the case for the college sweethearts. Early on in the season, Gillian stated that she wanted to know what being single in her early 20s would be like. Her intentions became even more evident when she shared a conversation with the show’s host, Mark Walberg (not that one — different spelling).

Not long after, both members of the duo started forming connections with some of the singles: Edgar with Marissa, and Gillian with Tommy. During one of Edgar and Marissa’s quieter moments, he revealed that he and Gillian should’ve been celebrating a milestone together. “It feels really weird to be on a date with another girl on my three-year anniversary,” he said. “I wanted to so badly to spend this three-year anniversary with her, but now that I’m here, there’s no reason for me to be sad without her.”

Elsewhere things between Tommy and Gillian had already begun heating up. “Tommy and I have been getting super close, and I felt comfortable with letting him sleep in my bed,” she told the cameras. “But I don’t know him well enough and I also don’t want to do that to Edgar.” She did, however, begin to cross boundaries, sharing both a bed and a kiss with Tommy. “He’s a pretty good kisser and I enjoyed the kiss,” she admitted, before also revealing, “I have definitely formed a connection with Tommy. He’s very different than what I’m used to.”

Things began to unravel further during a bonfire ceremony when Edgar began to tear up after watching Gillian’s intimate interaction with Tommy. “I don’t know Gillian, I don’t know who she is now and I don’t want that anymore,” he said. When it was Gillian’s turn at the bonfire she got to watch one of Edgar’s confessionals. “Gillian, what the f*ck,” he said. “If you’re not in this, why the f*ck did you drag me all this way? I love you. But, if you don’t love me, then leave me alone. Leave me the f*ck alone.”

To say their relationship was on the rocks was an understatement. And all the while, Gillian still had Tommy to fall back on, despite the fact that he, too, had expressed some doubts about the likelihood of their relationship actually working out. And it sounds like Tommy may have been right, especially after Gillian began adding posts to a saved story on her Instagram.

In a joking video, Gillian asked her followers if she would be better off with Tommy or rapper Tory Lanez. In another post, she said that she ultimately still has stronger feelings for Edgar than Tommy, being that she and Tommy are still getting to know each other, whereas she and Edgar have several years’ worth of history. Gillian also teased that despite everyone’s expectations, audiences will be surprised by the ending. Alas, by the sound of things, it seems like she and Tommy didn’t work out.