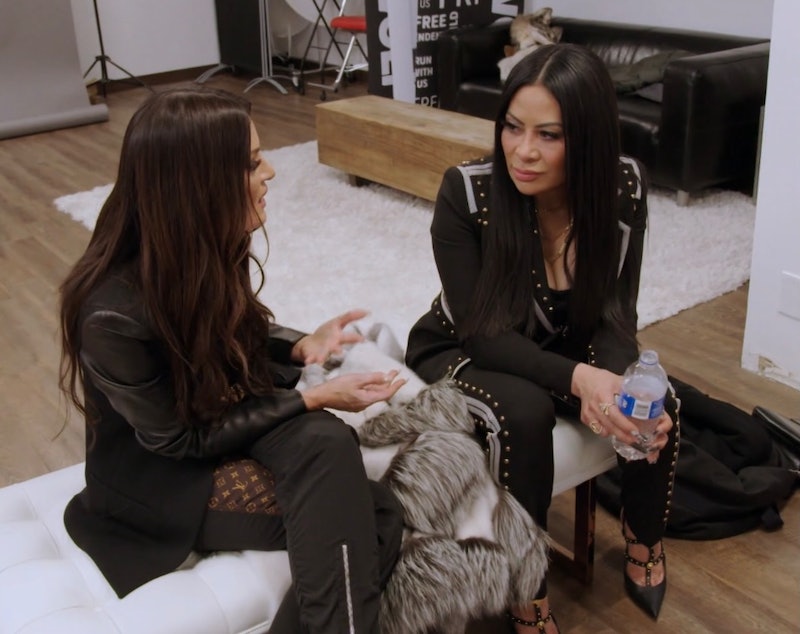 The Real Housewives of Salt Lake City’s Jan. 9 episode ended with a heated argument between Jen Shah and Lisa Barlow. It appears a producer intervened before the RHOSLC co-stars got physical, and the women eventually moved on: The RHOSLC midseason trailer previews more Jen and Lisa scenes to come. But that doesn’t necessarily mean the pair’s friendship survived.

Ever since Jen made comments about Meredith Marks’ son Brooks on social media, Lisa has been caught in the middle of the two’s feud. Though she’s been friends with Meredith for many years, she cares just as much about Jen and has largely refused to take sides in their fight. But after accusations arose that Meredith may have tipped off the feds, leading to Jen’s arrest and ongoing legal troubles, Jen felt compelled to push Lisa to make her allegiances clear.

“Tensions were high with me, and emotions, because this is my life. This isn’t like the “hospital smell,” OK? This is a real thing that can affect my family and my livelihood,” Jen explained of the confrontation on Bravo’s RHOSLC after show. “This is not OK if [Meredith], your friend, is going around calling private investigators and calling the feds, so that’s why I looked at Lisa like, ‘That’s your girl.’ You defend her, no problem, then defend her right now. How do you defend this?’”

In a separate after-show interview, Lisa likened the incident to The Shining, adding that Jen’s emotions were “running rampant” and that she “thought it was gonna turn into something physical.” Meanwhile, Heather Gay said that it was actually the first time she believed Lisa and Jen’s friendship was real, because she “saw some actual emotion between the two.” Her take on the altercation? “It was like Lisa had to answer for the fact that she was still kind of pretending to be Meredith’s friend, but Jen was like, ‘You’re not Meredith’s friend, and you better own it right now,’” Heather said. “Lisa was like in a fight for her reputation at all costs, and then the fight just escalated, like, immediately.”

Before the after-show segment ended, Jen addressed Lisa directly: “You don’t want the Shah smoke, honey. Sit down. Because you ain’t been doing sh*t but going to Taco Bell to get a double crunchy Gordita, b*tch, so sit down.”

Heather also discussed the fight between Jen and Lisa further on The Wendy Williams Show’s Jan. 10 episode. “I was thinking, ‘Get her Jen, like get her,’” Heather said, adding that she wanted her friend to “hold Lisa accountable” for what she says in private but isn’t “willing to admit publicly.” Lisa apparently caught wind of Heather’s comments and subtweeted her the next day. “If you promote violence and say ‘get her’ you’ve got issues. #notbabygorgeous,” she wrote.

Within hours, Jen came to Heather’s defense. “[Heather] wasn’t promoting violence Lisa. ‘Get her’ was referring to me calling you out on the double standard and lies,” she replied to Lisa’s tweet. “If you want to discuss promoting violence...let’s roll footage. Who pushed who? Who said ‘come on let’s go’ ...but keep that narrative going, it’s cute.” Though Lisa didn’t appear to publicly engage, Jen followed up in another subtweet reply, writing that she’s “not here for ... the false narrative” about Heather.

It’s also worth noting that this interaction occurred shortly after the RHOSLC Season 2 reunion taped on Jan. 6, and host Andy Cohen hinted on his SiriusXM show Radio Andy that friendships and alliances had shifted since filming for the season ended. “The women saw the remaining six or seven episodes before the reunion,” he said. “There is something coming up that is jaw-dropping that no one knows about that will rock the foundation of two of the Housewives.”

Though it’s equally likely Andy was referring to Lisa and Meredith, their recent Twitter activity seems to indicate that Lisa and Jen’s friendship isn’t in a great place anymore either.