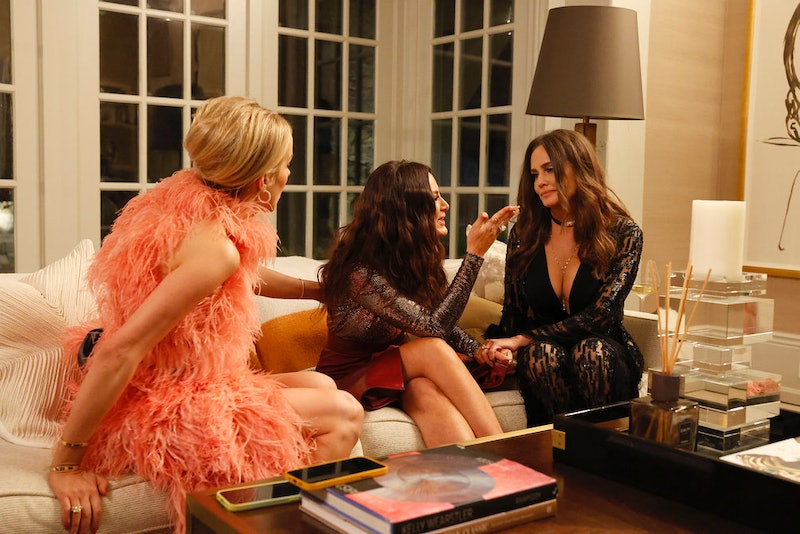 During an early Season 2 episode of The Real Housewives of Salt Lake City, Mary asked Meredith where her friendship with Lisa stood. “That’s a good question,” Meredith replied, noting that Lisa’s friendship with Jen had caused a rift in their 10-year relationship. “She calls me her best friend, we are like sisters, [but] she’s become friends with Jen over the last year,” Meredith explained. “It’s been very bizarre. You know what [Jen’s] done with my child. I just don’t understand why you wouldn't take my son’s side?”

Though Jen apologized to Brooks at the beginning of Season 2 for liking homophobic tweets about him, Meredith said Lisa’s neutrality about the situation was “a little triggering” for her. “Lisa never turned to Jen and said, ‘What you did to Brooks Marks is wrong.’ Instead, it’s been ‘let’s make peace’ ... basically like almost trying to make me feel like I’m in the wrong, too. And I didn’t do anything wrong.”

Meanwhile, Lisa has taken issue with Meredith’s “hypocritical” defense of Mary and the accusations about her church. The tension reached a boiling point at Whitney’s Wild Rose launch party, where Meredith stormed away as Lisa told her she’s “not chasing again.” Things got even worse later in the season when questions about the timeline of Meredith’s father’s memorial arose, and Lisa’s hot mic moment captured an explosive, closed-door tirade about her friend of 10 years.

Fed up by Meredith taking Mary’s side again at Jen’s Cinco de Mayo dinner in Zion, Lisa stormed away from the table, and, once inside her bedroom, began an expletive-filled rant. “Meredith can go f*ck herself; I’m done with her. Cause I’m not a f*cking wh*re and I don’t cheat on my husband. Her and her dumb f*cking family that poses. Why don’t you own a house? Oh, wait, you can’t, cause your husband changes jobs every five minutes. Meredith is a piece of f*cking sh*t. I had your back, and I’m offended by that. F*k you. That f*cking piece of sh*t garbage wh*re. I f*cking hate her. She’s a wh*re. She f*cked half of New York. She can go f*ck herself.”

Meredith saw the footage for the first time just one day before the RHOSLC cast taped the Season 2 reunion, at which time she said it made her feel “utterly sick.” "The content is absurd. If that's how you feel about me, fine. That's OK, I don't really care about that,” she said. “[But] the venom and the hatred that the delivery came with is what resonated. … I couldn't even sit and watch it. I'd stop it, it took me about an hour to get through it."

Lisa, for her part, explained that she was talking to herself in a “blind rage rant” and denied that her comments were a “truth dump.” Despite Whitney’s claim that Lisa had repeated the same sentiments about Meredith on other occasions, she insisted that was not the case and that she’d never previously spoken negatively about her or her marriage. "Are my words awful? Yes. Was I at a breaking point? Absolutely. Was I in the privacy of my room? 100%," Lisa continued. "I could not take any more. Do I regret saying it? Yes. Am I sorry? 1,000%. Meredith, I can not say enough how sorry I am.”

During a filming break, Lisa approached Meredith privately, attempting to apologize once again. "I did not ever mean to hurt you, I understand that hurting you hurts [your family]," Lisa said, adding that she was also upset at the time because she’d just heard rumors that Meredith made fun of her home renovations.

It doesn’t seem like the two made amends. Meredith addressed Lisa’s rant on Watch What Happens Live a month after the reunion, saying that she was still “trying to still decipher” what triggered her friend. “When Lisa apologized to me later on, she told me that somebody told her that I said her house was ugly, and that’s why she felt that that tirade was justified,” Meredith said in late January. “I don’t really understand that. That seems quite vapid to me.”

The jewelry designer also shared that she’d had “certain clues” about Lisa’s feelings leading up to the incident, including that she’d blocked her husband, Seth, as well as her children from viewing her Instagram Stories. “But this level of hate is far beyond anything I could have ever imagined. And the lies that she’s spewed… It’s incomprehensible,” Meredith said, adding that perhaps Lisa was “projecting” with her accusations about her sex life as well as her “family that poses.”

In an attempt to defend herself on Twitter, Lisa posted (and later deleted) screenshots of call records and text messages between her and Meredith while part two of the RHOSLC reunion was airing on March 6. The women continued going back and forth, with Meredith even accusing Lisa of having an article about her friend Cameron Williams changed after she was “caught [in] lies.” On March 6, Meredith tweeted that Lisa did not support her after she confided that she was “in immense pain” about an undisclosed situation. “I could not talk about because it wasn’t my story to tell. But I did tell lisa that it was much more painful than the loss of my father,” she wrote.

Prior to their falling out being revealed on air, the onetime best friends dropped hints that their relationship was in dire straits. Meredith explained during a September appearance on WWHL, for example, that in the entire time she’s known Lisa, Jen’s friendship is the first one Lisa has put before their own. She added that Season 2 included one of the worst fights the two have ever been in, then rated Lisa’s loyalty on a scale from 1 to 10. “I think from Lisa’s perspective, she will say a 10. And from my perspective, I would say that she views herself as loyal, but we have different definitions of loyalty, so I could not give her a 10,” Meredith said. “I’m not putting a number on it. I’m not saying she’s not loyal, I think she’s doing the best she can within her own views.”

The same month, Meredith told Entertainment Tonight that while she and Lisa were “definitely in a little bit of a rockier place” while filming RHOSLC, they were eventually able to talk through their problems. “At the end of the day, if somebody is really your true friend — truly a good friend — you are going to work through things that you don't see eye to eye on, and you come to some kind of resolution, whatever that may be, and it’s more layers to the relationship,” Meredith said.

Lisa, for her part, told ET in October that Meredith was “deeply impacted” by her feud with Jen and had become a “different person” over the last two years. “[She’s] just very angry, very upset, very hurt,” Lisa said. She added that Meredith sent her screenshots of Jen’s social media comments and likes regarding Brooks multiple times. “I didn’t need to see them again. I believed her the first time and I addressed it with Jen. ... Meredith knows, I have talked to Jen.”

The women seemed to be on much better terms by the time their birthdays rolled around in December 2021. “Our first lunch turned into dinner and years of friendship,” Lisa captioned a birthday tribute to Meredith on Dec. 15. “Wishing you the most amazing birthday, today and lots of ♥️! Love being your sag sister!” One day earlier, Meredith also honored Lisa on Instagram, writing that she was “so grateful” for all of their memories. However, Meredith has deleted the post, perhaps after she saw the footage of Lisa’s rant. Also worth noting: Meredith didn’t “like” or comment on Lisa’s birthday ‘gram.

For now, the status of Lisa and Meredith’s friendship remains in question. Fans will likely get to see any reconciliation attempts play out on camera, as both have reportedly already been filming RHOSLC Season 3 together.

More like this
'RHOSLC' Star Jen Shah Refuses To Do A Post-Sentencing Interview With Andy Cohen
By Brad Witter and Jake Viswanath
Everything To Know About 'RHONJ' Season 13
By Brad Witter and Jake Viswanath
'RHOP' Stars Robyn & Juan Reportedly Got Remarried & Filmed The Ceremony
By Brad Witter
Everything To Know About 'The Real Housewives Ultimate Girls Trip' Season 4
By Jake Viswanath
Get Even More From Bustle — Sign Up For The Newsletter
From hair trends to relationship advice, our daily newsletter has everything you need to sound like a person who’s on TikTok, even if you aren’t.

This article was originally published on Jan. 9, 2022