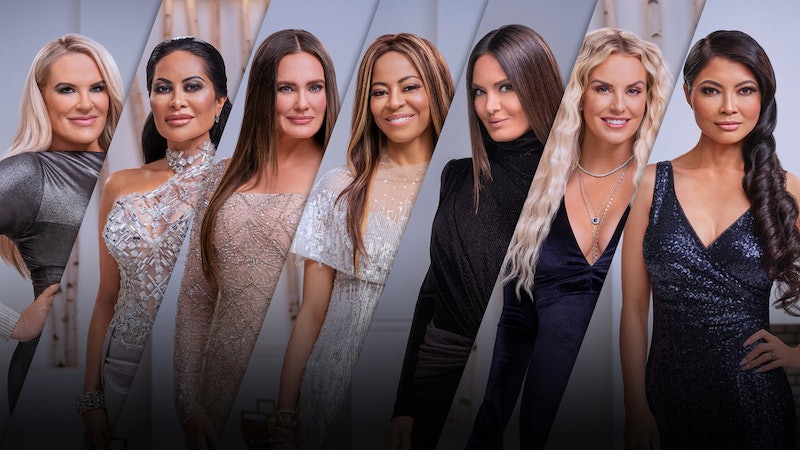 The stars of The Real Housewives of Salt Lake City returned to Bravo this year for more drama, fights, and perhaps even a potential prison sentence for a series regular. Though RHOSLC is one of the most recent additions to the ever-expanding Housewives franchise, its cast members (at least some of them) have already become favorites for longtime fans.

The seven women who make up the main cast of the show — Heather Gay, Jen Shah, Meredith Marks, Mary Cosby, Lisa Barlow, Whitney Rose, and Jennie Nguyen — are all wealthy for various reasons. Some make tons of cash from their business ventures, others founded several brands, and one housewife inherited her money. Adding to their existing earnings, the series regulars also earned between $50,000 to $100,000 for the first season, according to Screen Rant.

Let’s look at which Real Housewives of Salt Lake City star is the richest?

What Is Lisa Barlow’s Net Worth?

Tied as the wealthiest RHOSLC member, Barlow is self-made. The star balances two entrepreneurial projects that have attributed to her $5 million net worth, according to SCMP. She worked hard at her marketing company Luxe, and she has also built the tequila brand Vida.

What Is Mary Cosby’s Net Worth?

Cosby’s net worth is the same as Barlow’s, but their journeys to the millions they claim was not the same. Cosby inherited the empire her grandmother created throughout her lifetime, which includes churches and restaurants, pulling in millions from many different sources. After the grandmother passed, her will stipulated her granddaughter could take over only if she married her step-grandfather, which she did. Cosby shared this information on the show, and then during the reunion she denied it, at least partially.

What Is Whitney Rose’s Net Worth?

Rose owns and operates Iris+Beau, a skincare line that advocates for living healthy and using natural ingredients to combat things like redness and aging. The brand’s website describes its goal as: “To provide clean natural products for a healthy lifestyle. Whether you are looking for skin hydration, an in-home spa experience, or a more intense anti-aging regimen, we’ve got you covered.” Most items start at $30 and go up from there. The brand has boosted her net worth to $3 million, according to SCMP.

What Is Jen Shah’s Net Worth?

Shah has been very open about how she enjoys marketing, and not just the visual aspects of the job. She likes digging into data to find what’s working and what isn’t, using all that knowledge to help companies make more money via their various marketing efforts. In her spare time, she has also started three businesses of her own: JXA Fashion, Shah Beauty, and The Real Shah Lashes.

Though Shah’s net worth is pegged at $3 million, that figure has come into question because of recent legal trouble, as she has been accused of the crimes of both wire fraud and money laundering. She has been connected to an illegal telemarketing scam, one which allegedly may have made her quite a bit of money. While the reality star insists she’s innocent, her assistant Stuart Smith recently changed his stance and admitted his guilt in court.

What Is Jennie Nguyen’s Net Worth?

The newest member of The Real Housewives of Salt Lake City, Nguyen’s accumulation of wealth seems to be in the past. She used to own a medical spa firm, but she reportedly sold it before she began appearing on the reality program, per Screen Rant. Her husband, a chiropractor, also pulls in a great living, which contributes partly to her living the lifestyle portrayed on the series.

What Is Heather Gay’s Net Worth?

Gay founded the Salt Lake City-based beauty treatment center Beauty Lab + Laser years ago, and it has contributed to her making a very comfortable living. The location provides everything from low-cost options like spray tans ($35) and Botox ($12 per unit) to extremely expensive procedures. These high-priced items include a full lip pump ($850), a cheekbone pop ($850), and even one that promises to remove fat from a double chin ($1,200).

What Is Meredith Marks’ Net Worth?

Marks is doing quite well for herself. The reality TV star owns and runs a jewelry and apparel line that borrows her name, and the items are not for those who are cost-conscious. Sweatshirts go for more than $300, scarves are about $100 (and those are the cheaper ones), while a gold chain necklace will cost fans a whopping $14,000. While these products are undoubtedly expensive to produce, it’s also not difficult to understand how even a few sales could help bring her net worth to $1 million, per SCMP.