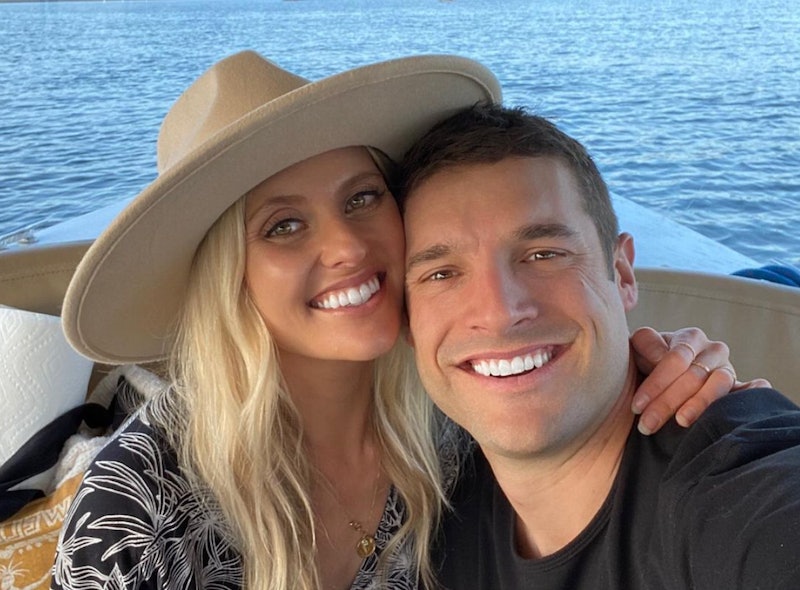 We’re only a few weeks in and Bachelor in Paradise is already heating up. Kendall’s coming back for Grocery Store Joe, Tammy has swiftly moved on from Aaron to franchise villain Thomas, and Tia and Kenny stripped down for a game of beach volleyball after he already visited the “Boom Boom Room” with Demi. But the most buzzed-about moment so far may have been when former Bachelorette Becca Kufrin arrived, marking the first time that a franchise lead was invited down to Mexico.

Kufrin hasn’t been single for very long. Roughly two years after getting engaged to Garrett Yrigoyen on the Season 14 finale of The Bachelorette, she confirmed their split on a September 2020 episode of the Bachelor Happy Hour podcast. “Garrett and I have decided to end our engagement,” she said. “After many conversations, we came to this decision. It wasn’t something that we just arrived at one night.”

Shortly before calling it quits, 32-year-old Yrigoyen came under fire for publicly supporting police officers during the Black Lives Matter movement. However, the former Bachelorette said in the announcement that they didn’t break up because of “one Instagram post or somebody else’s opinions or comments.” “There’s much more to it,” she explained. “To any relationship, there’s a lot of layers, and it’s not for me to divulge details.”

Yrigoyen didn’t address their split until six months later during an Instagram Q&A. “I understand everyone wanting to know what exactly happened because you feel so invested into our lives and relationships,” he said, adding that he doesn’t want to be known for The Bachelorette. “It’s not what defines me or my character. I’m only going to answer this question ever as, it just didn’t work out.” Interestingly, it seemed he had already moved on.

In October 2020, one month after Kufrin announced their breakup, Yrigoyen revealed that he was dating 28-year-old yoga instructor Alex Farrar on Instagram. “Happy Halloween,” he wrote alongside a photo of the new couple pumpkin picking. “Picked up a special pumpkin at the patch. Per Us Weekly, Kufrin seemingly reacted to her former fiancé’s new relationship one day later on her Instagram Stories. “Sunday lesson,” she wrote. “Be mindful of how you react to people when you feel disrespected.”

Based on Yrigoyen’s Instagram feed, it seems he met his match. The Season 14 contestant is very outdoorsy, and he and Farrar seemingly spend a lot of time hiking, camping, and adventuring together. “No bad days with you,” Farrar captioned an Instagram post in February of them in the snow. In April, the vinyasa teacher opened up on Instagram about making their relationship work long distance. “They say distance makes the heart grow fonder, and I’m a firm believer now that it’s true,” she wrote. “500 miles can’t stop me from loving on you.”

By June, it became clear that the Farrar had every intention of moving from San Diego to Yrigoyen’s hometown of Reno, Nevada. “I’ve been falling in love with Reno & Tahoe more and more every time I visit,” she wrote on Instagram. “Excited is an understatement for what’s to come, and for the day I can officially call this place home.” That day came roughly one month later, when Farrar shared a photo of the couple posting next to a U-Haul. “Reno is ready for you,” Yrigoyen commented.

On Sept. 1, Yrigoyen marked their first anniversary by gushing over his girlfriend on Instagram. “I love your spirit and personality and appreciate your sacrifices and good-hearted nature that allows me to pursue my dreams and hobbies,” he wrote after telling their first date story. “We have already created so many great memories together and the future is only looking up from here. There has been a lot of change in 1 short year, but 1 thing is for certain, my best days are days spent with you.”

While it’s clear that Yrigoyen has moved on, it remains a mystery how Kufrin’s journey to find love will end. Despite making her debut on Bachelor in Paradise several weeks in, there was no shortage of men interested in pursuing a relationship with the 31-year-old podcast host. Karl and Ivan were among the contestants who wanted to get to know her better, but ultimately, Kufrin gave her rose to 26-year-old Aaron Clancy from Katie’s season of The Bachelorette.

Kufrin and Clancy hit it off immediately, sharing witty banter about their 5-year age difference before the California native admitted to massively crushing on the former Bachelorette. “This is the first Bachelorette in Paradise and also my favorite one,” Aaron told the camera. “I have a big crush on Becca.”

More like this
Who Is Nick Cannon Dating & How Many Kids Does He Have?
By Jordyn Tilchen and Radhika Menon
Bachelorette Gabby Kissed Her New Fiancé On 'Dancing With The Stars'
By Jake Viswanath
Where Is Former Bachelor Host Chris Harrison Now & What Is His Net Worth?
By Hugh McIntyre
Everything To Remember About Lace Morris Before 'Bachelor In Paradise' Season 8
By Grace Wehniainen
Get Even More From Bustle — Sign Up For The Newsletter