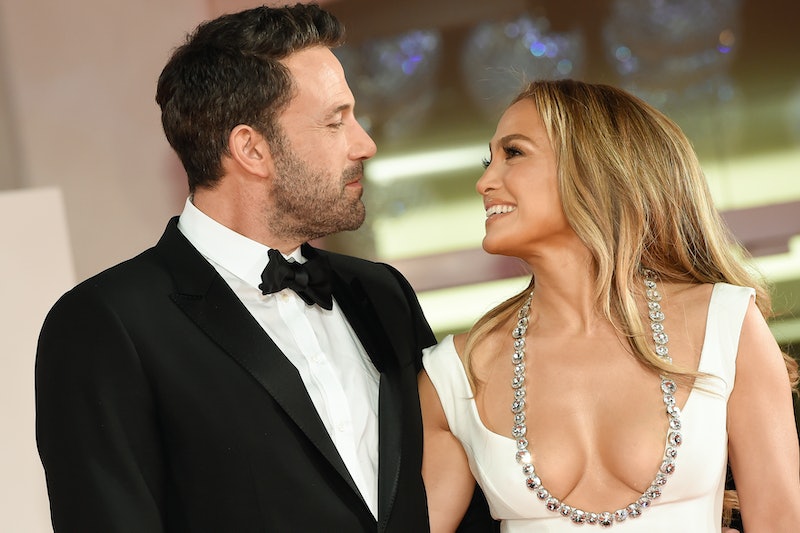 Like the rest of us, Ben Affleck is completely blown away by Jennifer Lopez. After J.Lo was named Adweek’s 2021 Brand Visionary, the Justice League actor gushed over his girlfriend’s unmatched work ethic and the enormous impact she’s had on women of color. “All I can tell you is that I have seen firsthand the difference representation makes because I have seen, over and over and over and over, women of color approach Jennifer and tell her what her example as a strong woman and a woman succeeding and demanding her fair share in the business world means to them,” Affleck, 49, told the publication.

The Gone Girl star went on to say that he’s “in awe” of J.Lo, 52, who has been a trailblazer for so many women over the course of her illustrious career. “At most, as an artist, I can make movies that move people,” he continued. “Jennifer has inspired a massive group of people to feel they have a seat at the table in this country. That is an effect few people throughout history have had, one I will never know and one I can only stand by and admire with respect.”

This isn’t the first time that Affleck has publicly swooned over Lopez. Shortly before rekindling their romance in April 2021, Affleck told InStyle that J.Lo is “the hardest-working person” he’s ever encountered. “I thought I had a good work ethic, but I was completely humbled and blown away by what she was committed to doing day in and day out, the seriousness in which she took her work, the quiet and dedicated way she went about accomplishing her goals, and then how she would go back and redouble her efforts,” he told the magazine.

Throughout her career, J.Lo has challenged herself by dipping her toes into many different projects. She’s a musician, an actor, a producer, a clothing designer, and a mother, and according to Affleck, it’s a combination of natural talent and hard work that got her where she is today. “She has great talent, but she has also worked very hard for her success, and I’m so happy for her that she seems, at long last, to be getting the credit she deserves,” Affleck added.

It’s not just the pop star’s work ethic that Affleck finds inspiring; it’s her beauty, too. “Where are you keeping the fountain of youth?” he joked to InStyle. “Why do you look the same as you did in 2003 and it kind of looks like I’m in my 40s… at best?” Lopez, for her part, appreciated her former fiancé’s compliment. “Ben is funny!” she responded. “He still looks pretty good too.” Despite the friendly exchange, it wasn’t until J.Lo called it quits with baseball star Alex Rodriguez that the two could pick up where they left off.

In April, just weeks after J.Lo and A-Rod announce their split in a statement to Today, Affleck and Lopez were spotting hanging out at the singer’s Los Angeles home. The following month, they were spotted on a getaway in Montana. In June, photos surfaced of the pair getting cozy while out to dinner in West Hollywood. By the end of July, J.Lo confirmed their romance with a kissing photo on Instagram in honor of her birthday.

Lopez and Affleck first met on the set of the movie Gigli in 2001. The duo got engaged the following year, but decided to postpone their wedding due to “excessive media attention.” In 2004, they officially split. Now that 17 years have passed and they’re back together, they seem happier than ever. “I love what I’m doing, I love where I’m at, I love the person that I’m continually evolving into and becoming,” J.Lo told Apple Music’s Zane Lowe a few weeks before officially confirming their relationship. “And that kind of joy, that kind of happiness, that kind of love always inspires me.”

More like this
J.Lo Calls Ben Affleck “The Most Consistent & Selfless” Dad On Father's Day
By Jake Viswanath
J.Lo Uses They/Them Pronouns To Introduce Her Child Emme For A Special Duet
By Jake Viswanath
Kendall Jenner & Devin Booker Reportedly Broke Up After 2 Years Of Dating
By Jordyn Tilchen
Khloé Kardashian Is Reportedly Dating A Private Equity Investor She Met Through Kim
By Jordyn Tilchen
Get Even More From Bustle — Sign Up For The Newsletter