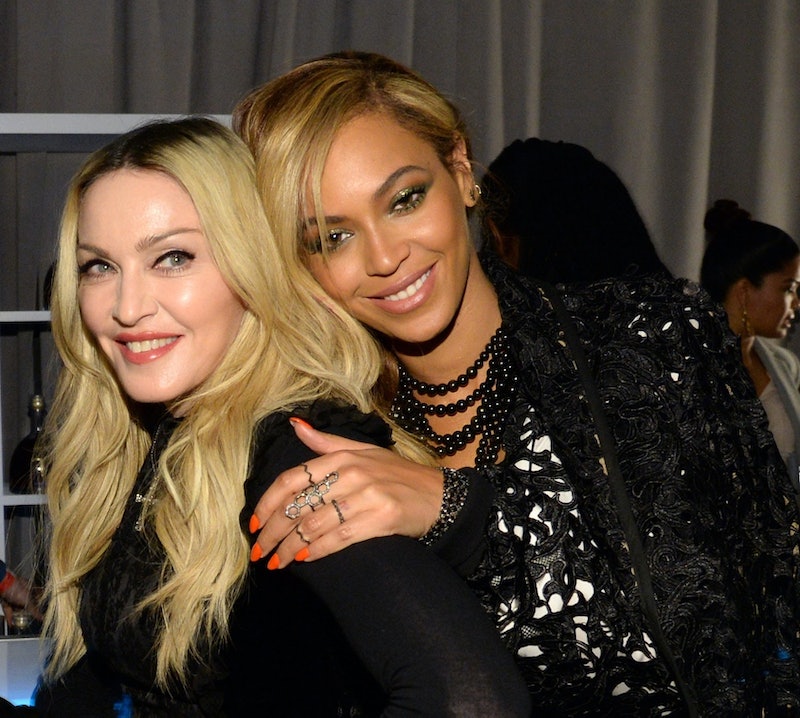 As if “BREAK MY SOUL” off Beyoncé’s new album, Renaissance, wasn’t already the empowering summer anthem we needed, the Grammy legend went ahead and dropped “BREAK MY SOUL (THE QUEENS REMIX)” — with the help of another musical icon, of course. Madonna’s “Vogue” is sampled on the track, and Beyoncé riffs on the song’s nod to old Hollywood (“Grace Kelly, Harlow, Jean / Picture of a beauty queen”) with the addition of names like Aaliyah, Whitney Houston, and Grace Jones, to name just a few.

While Madonna didn’t seem to record new vocals for the remix, Beyoncé took the time to thank the original “Vogue” singer for her involvement — which apparently included titling the new track. Madonna shared on her Instagram story Aug. 9 that Beyoncé had sent her a beautiful bouquet of flowers, accompanied by a sweet note from her fellow hitmaker. “Thank you, Queen. I’m so grateful for you,” Beyoncé writes. “You have opened so many doors for so many women. You are masterpiece genius. Thank you for allowing me to sing in your song and thank you for naming the remix!!!! Love always and forever, B.”

“❤️❤️thank you !! from one 👑 to another 👑,” Madonna wrote on her story, sharing her praise for the remix.

Beyond thanking her fellow queen (who is among the icons named in the remix), Beyoncé took to her official website to share a message of gratitude with everyone who’s streaming, singing, and dancing along to Renaissance — and those who have managed to memorize every lyric in less than two weeks.

“We did it!!! Thank you so much for your love and support,” begins Beyoncé’s note. “Nothing made me happier than seeing a club full of people sing every single word to every single song from top to bottom. This was years of experimentation. This was years of hard work, blood, sweat, and tears. I’m so grateful and it was worth it.”

The letter comes amid the announcement that Renaissance — which only just dropped July 29 — made Beyoncé the first woman to have a No. 1 album in nearly a year (the last was Adele’s 30). “I’m thankful that it was received and understood,” Beyoncé continues in her message, before going on to thank the people who made Renaissance possible. “Thank you to my beautiful team for your heart and grind. Thank you to all of the brilliant collaborators and musicians, composers and everyone involved in creating this piece of art. And thank you to the absolute best fans on the planet. I’m grateful to be loved by you. I love y’all deep. B.”