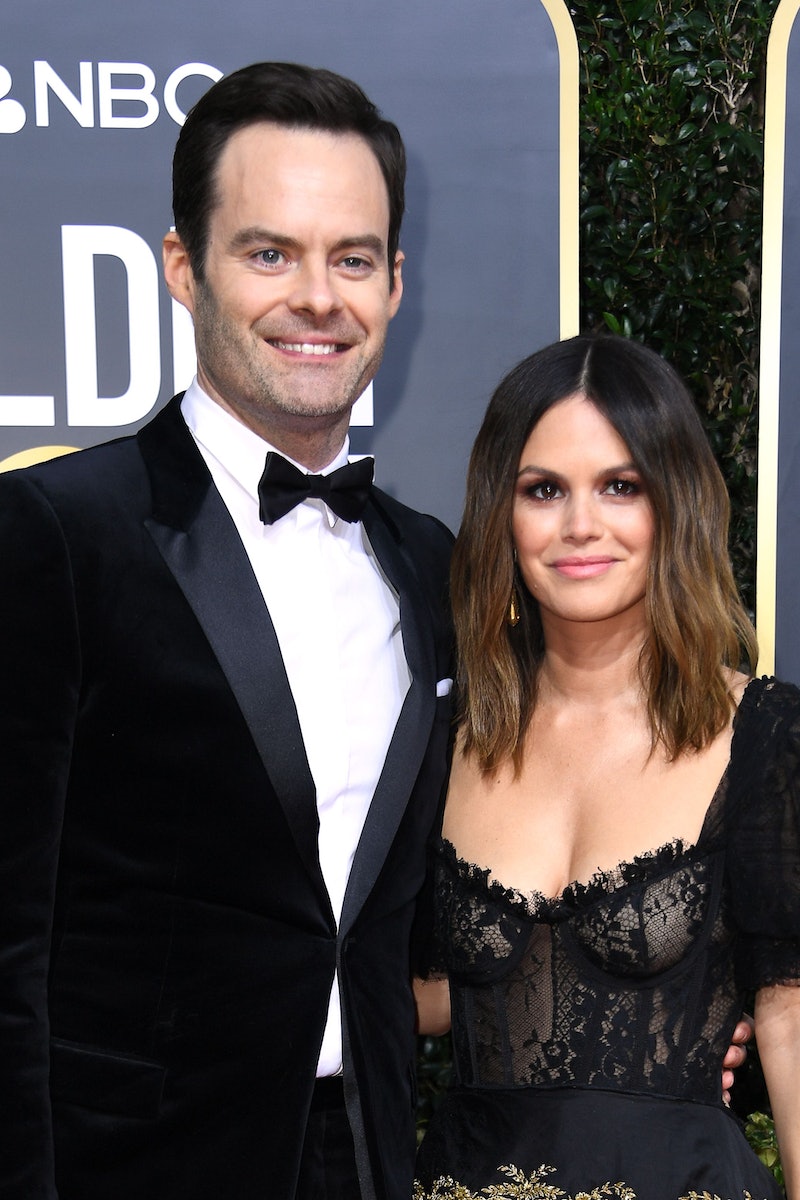 Six months after going public with their relationship, Bill Hader and Rachel Bilson have split, multiple sources confirmed to People, noting that the breakup was amicable. E! News reported the news the same day, with their source claiming that Bilson is "absolutely devastated" over the breakup. The pair made their red carpet debut as a couple at the 2020 Golden Globes in January, after a first sparking dating rumors during a December Starbucks outing in Oklahoma. Bustle reached out to reps for Hader and Bilson about the reported breakup, but did not receive an immediate response.

In February, another insider told People that the costars from the 2013 rom-com, The To Do List, were getting more serious. "She won't stop laughing when she's with Bill,” the source explained to the magazine of Bilson. "He is very sweet and considerate to her. Quick to open doors and acts very attentive."

Hader and his ex-wife Maggie Carey, with whom he shares daughters Hannah, 10, Harper, 7, and Hayley, 5, split in 2017 after 11 years of marriage. For her part, Bilson also has a child of her own: 5-year-old daughter Briar Rose, with ex, actor Hayden Christensen. "She’s my world and I talk about her all the time," the O.C. alum gushed on a July 2019 episode of former Bachelor Nick Viall's podcast, The Viall Files, adding that she hadn't introduced her daughter to anyone she'd dated since Christensen. "It would have to be a very serious relationship," Bilson added.

Following the podcast interview, Bilson and Viall fueled dating rumors of their own when they posted flirtatious comments on social media. When Us Weekly asked Bilson in September if they were dating, she responded, "I don't want to talk about it." (Bustle previously reached out to Bilson's rep about the dating speculation, but did not hear back; Viall's rep declined to comment, at the time.)

Aside from their public date night at the Golden Globes, Hader and Bilson have largely kept their relationship private, however, and so a breakup confirmation from either actor directly is unlikely.

More like this
Michael B. Jordan Tackled His "Public Breakup" With Lori Harvey On 'SNL'
By Brad Witter
Selena Gomez Confirms She's Single Amid Drew Taggart Dating Rumors
By Martha Sorren, Jake Viswanath and Jack Irvin
Who Is Pete Davidson Dating? He & Chase Sui Wonders Got Caught Kissing
By Jake Viswanath
Everything You Need To Know About Kanye's Post-Kardashian Dating Life
By Bustle Editors
Get Even More From Bustle — Sign Up For The Newsletter
From hair trends to relationship advice, our daily newsletter has everything you need to sound like a person who’s on TikTok, even if you aren’t.