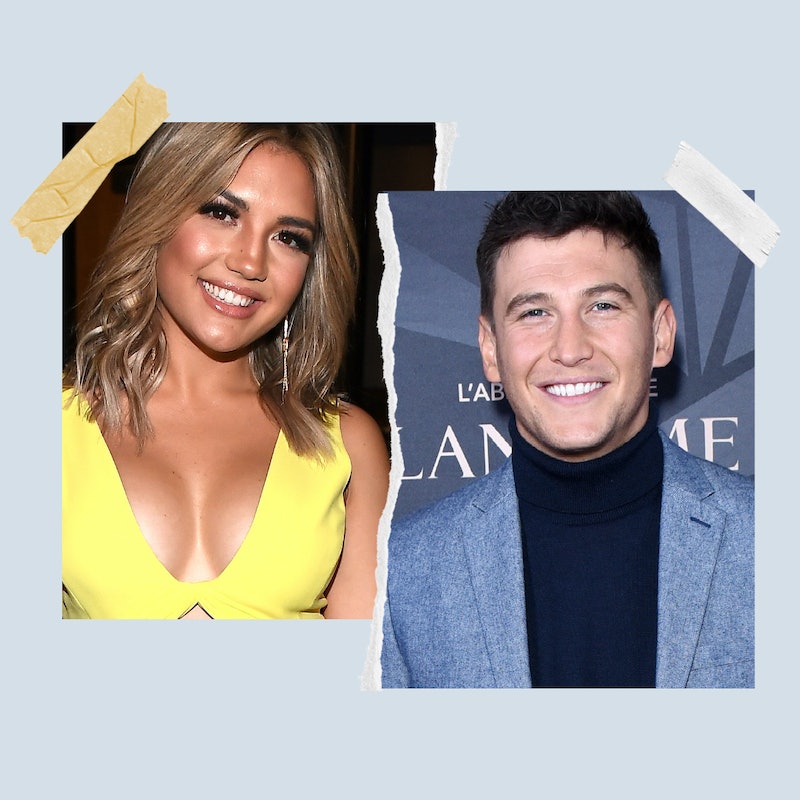 For one member of Bachelor Nation, love might be blind. The Bachelorette alum Blake Horstmann is reportedly dating Love Is Blind star Giannina Gibelli after meeting on the Paramount+ reality series All Star Shore which airs on June 29. “They’re taking things slow,” a source told PEOPLE on Jan. 4. “But [they] seem really happy together.”

All Star Shore is the first reality series to bring stars of different networks together on a single show, and it seems like widening the net has formed at least one real love connection. Here’s a timeline of how Giannina and Blake ditched their original reality show lovers and found one another.

Blake was introduced as a contestant on Becca Kufrin’s season of The Bachelorette in 2018 and made it to the finale, eventually losing to Becca’s now ex-fiancé Garrett Yrigoyen. He fared even worse during his stint on Bachelor in Paradise the following year, quitting the show in its fifth week. In March 2020, Blake spoke out about his time on BiP, saying he still has “pretty bad PTSD” from the experience. “I don’t even know if I would do it in the future either because I don’t know if I could be myself,” he wrote on Instagram. “It’s hard for me to trust anybody now let alone producers and anyone in front of cameras. ... People change dramatically in front of cameras.”

Giannina made her reality TV debut as a contestant on the runaway Netflix hit Love Is Blind, which gained a significant audience and buzzy chatter as the show aired right before the initial pandemic lockdown. She fell in love with fellow Love Is Blind contestant Damian Powers on the first season of the hit Netflix series, and even made it all the way to the altar with him. Damian opted not to marry her during the season finale, but they remained together after the show, even displaying their relationship struggles in 2021’s Love Is Blind: After the Altar special. However, the pair eventually split in the summer of 2021, with Giannina confirming to Entertainment Tonight in August that she had been “officially single” for a couple months.

Rumblings of a relationship between these two fan favorites began in late 2021 near New Year’s Eve when fans of the ABC and Netflix shows started speculating that they were dating after noticing that they recently posted Instagram photos with similar backgrounds. On New Year’s Eve, Blake posted a photo of him celebrating at Mile High Spirits in his home state of Colorado, posing in front of several barrels. On New Year’s Day, Giannina posted a photo of herself also in front of barrels. Before the holidays, she had hinted on Instagram that she was heading to a colder destination (“when Miami goes to the mountains”), which would fit Colorado to a T.

It didn’t take long for sources to confirm that fans were correct: People reported the news of their “romance flourishing” on the set of their new show which filmed sometime in 2021 on Jan 4. Since then, Giannina has gushed about her new man and the sides of him she’s gotten to see away from the cameras: “He's very respectful, but I don't think that they know just how funny and spontaneous and dedicated he is...I've never watched the Bachelor franchise or any of that so I didn't know who he was," she told People about the franchise Blake participated in. “He seemed familiar to me and he just flashed his big ol' smile at me and that's how I met him right on the beach.”

READ NEXT: Every Kind Of ‘Bachelor’ Limo Arrival, Explained

More like this
Hannah Ann Got Engaged 3 Years After 'The Bachelor' & The Proposal Was Dreamy
By Grace Wehniainen
Zach Reveals The Chaotic 30 Minutes That Were Cut From ‘The Bachelor’ Premiere
By Grace Wehniainen
10 Photos Of The Wildest Limo Arrivals From 'The Bachelor' Premiere
By Brad Witter
Love Is Blind’s Natalie Claims Shayne Signed Up For 'Perfect Match' While They Were “Still Together”
By Brad Witter
Get Even More From Bustle — Sign Up For The Newsletter
From hair trends to relationship advice, our daily newsletter has everything you need to sound like a person who’s on TikTok, even if you aren’t.