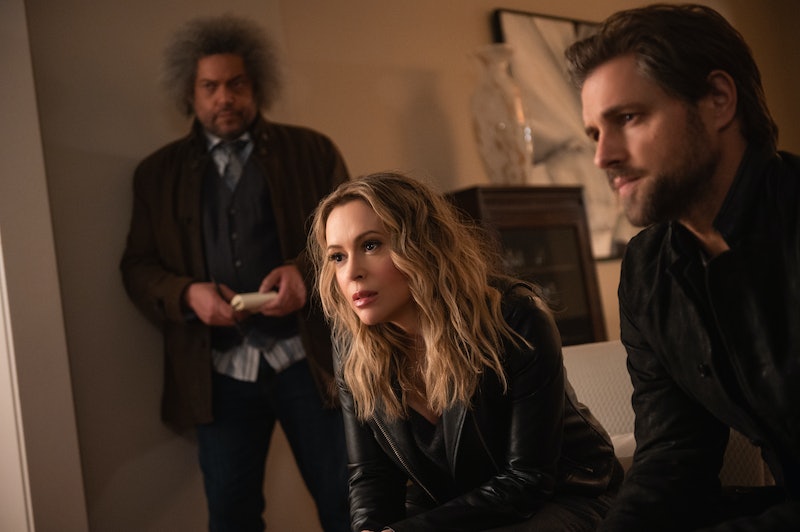 Netflix’s latest film, Brazen, is based on Nora Roberts’ novel Brazen Virtue — a murder mystery that sheds light on the dangers sex workers face on the job. And like any good mystery, it keeps viewers guessing until the very end.

Brazen stars Alyssa Milano as Grace, an accomplished mystery writer and self-described crime expert. Her estranged sister, Kathleen (Emilie Ullerup), is a high school English teacher who moonlights as a camgirl named “Desiree” for extra cash. When Kathleen is murdered in her own home while camming, Grace uses her crime-writer skills to help solve the case, much to the dismay of Detective Ed Jennings (Sam Page), who repeatedly warns her that fiction is nothing like the real deal. Grace ignores his protests and continues to investigate her sister’s puzzling murder, learning more about Kathleen’s secrets — and getting drawn into parallel investigations — along the way.

As with any crime thriller, the “whodunnit” question remains prevalent throughout the film. Is the killer someone Kathleen knew, or a stranger? And why did they do it? Below, an explanation of Brazen’s ending, and some insight to the killer’s motive. (Warning: major spoilers ahead.)

Grace immerses herself in the investigation by posing as “Desiree.”

Eventually, Grace learns that other webcam performers are also being attacked — and the killer is calling his victims “Desiree.” With this information, Grace decides to lure him into a trap by dressing up and camming as Desiree, believing that he’ll see her online and venture to Kathleen’s house to find her.

Meanwhile, two of Kathleen’s former students — Randy (Daniel Diemer), a troubled teen, and Jerald (Matthew Aaron Finlan), a star pupil — have been questioned by investigators along the way. When evidence arises that points to Randy, he’s immediately targeted as the lead suspect, but maintains his innocence. When the two are alone in a locker room after wrestling practice, Randy confronts Jerald; he says he was framed, and accuses Jerald of being obsessed with Kathleen. Jerald proceeds to attack Randy, and reveals himself as the killer in the process. It’s insinuated that his romantic feelings for his former teacher may have been a part of his motive.

The killer’s motive was rooted in mommy issues.

Now that investigators have enough evidence to bring Jerald in for questioning, they call off Grace’s plan to lure the killer into a setup. But Grace disobeys their orders, and waits for him to show up to Kathleen’s home. When Jerald arrives, she tricks him into confessing to his crimes on camera. Jerald then tries to kill Grace, but Detective Ed shows up right on time and shoots him dead.

The film reflects the dangers sex workers face while on the job.

While both the film and novel are works of fiction, the dangers sex workers face are very real. A study from the Urban Justice Center’s Sex Worker’s Project states that almost 50% of sex workers have experienced physical violence while on the job, and 45% to 75% of sex workers will face violence at some point.

More like this
The 'Spiderhead' Movie Ending Is Nothing Like The Short Story It’s Based On
By Morgan Leigh Davies
Here’s Everything Coming To & Leaving Netflix In July
By Grace Wehniainen
What’s New On Netflix: The Return Of 'The Umbrella Academy'
By Arya Roshanian
Everything To Know About Netflix's Marilyn Monroe Movie 'Blonde' Starring Ana De Armas
By Grace Wehniainen
Get Even More From Bustle — Sign Up For The Newsletter