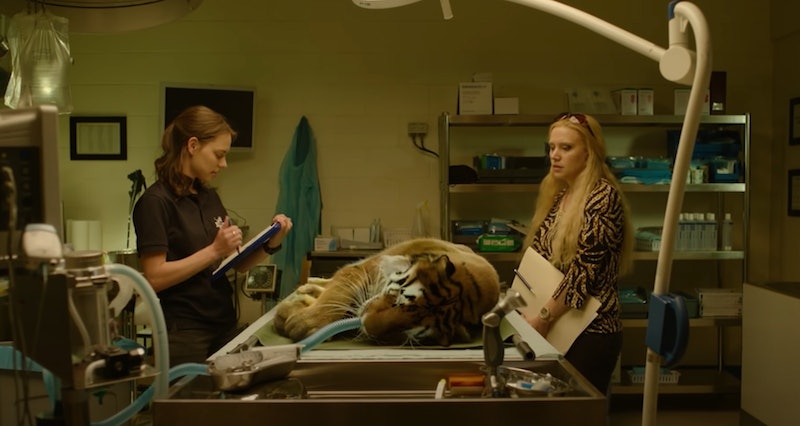 It’s been over two years since the release of Tiger King, Netflix’s wildly popular docuseries about the zookeeper turned convicted criminal Joe Exotic and his “rival” Carole Baskin, an animal rights advocate. Though the series centered around Exotic (real name Joseph Maldonado-Passage), Baskin also received a lot of public scrutiny regarding his repeated and largely baseless claims that she killed her first husband Don Lewis, who disappeared in 1997 and was later presumed dead. (Baskin was cleared as a suspect and has adamantly denied Exotic’s allegations). Currently, Exotic is in prison serving a 21-year sentence for a number of charges including attempting to hire two different men to murder Baskin, while Baskin continues to run her big cat animal sanctuary.

Peacock’s new scripted series, Joe vs. Carole, explores the two’s longtime feud. In doing so, it digs more into Baskin’s life and backstory, introducing her daughter Jamie Veronica Murdock, who’s played by Dare Me star Marlo Kelly. Baskin had Jamie with her first husband Michael Murdock, who she married at 17. The two had Jamie shortly afterward. Murdock was allegedly “extremely abusive,” but Baskin didn’t leave him until she was 24, four years after she met Lewis.

These days, the 40-year-old Jamie works alongside her mom at the Big Cat Rescue sanctuary as the president of the organization, a member of the Board of Directors, the chair of the volunteer committee, and the staff photographer — all roles that the sanctuary’s website says she’s been doing for over a decade. Additionally, she is a licensed wildlife rehabilitator and manages Big Cat Rescue’s bobcat rehab program. Jamie is active on her public @bigcatrescuepresident Facebook page, where she often shares updates on the big cats at the sanctuary and other parts of her life.

Jamie’s obvious love of animals is evident even through her side business — an art studio called Dancing Butterfly Arts, which also has an Etsy page where she sells vintage and antique pieces as well as handcrafted art. Many of the items she sells have something to do with big cats or other animals, especially her hand-crafted paw print art and watercolor paintings of big cats.

When it comes to her personal life, Jamie seems relatively private — an unsurprising choice considering the harassment her mother faced in the wake of Tiger King. It’s known that Jamie was previously married to Dr. Justin Boorstein, a vet with Big Cat Rescue, but it appears the two have separated and her Facebook page suggests that she is currently in a relationship with a man named Victor Alonso, according to Cheatsheet. She hasn’t commented about Kelly’s portrayal of her in Joe vs. Carole, but Baskin told Metro UK that she and her current husband, Howard Baskin, were looking forward to watching the show.