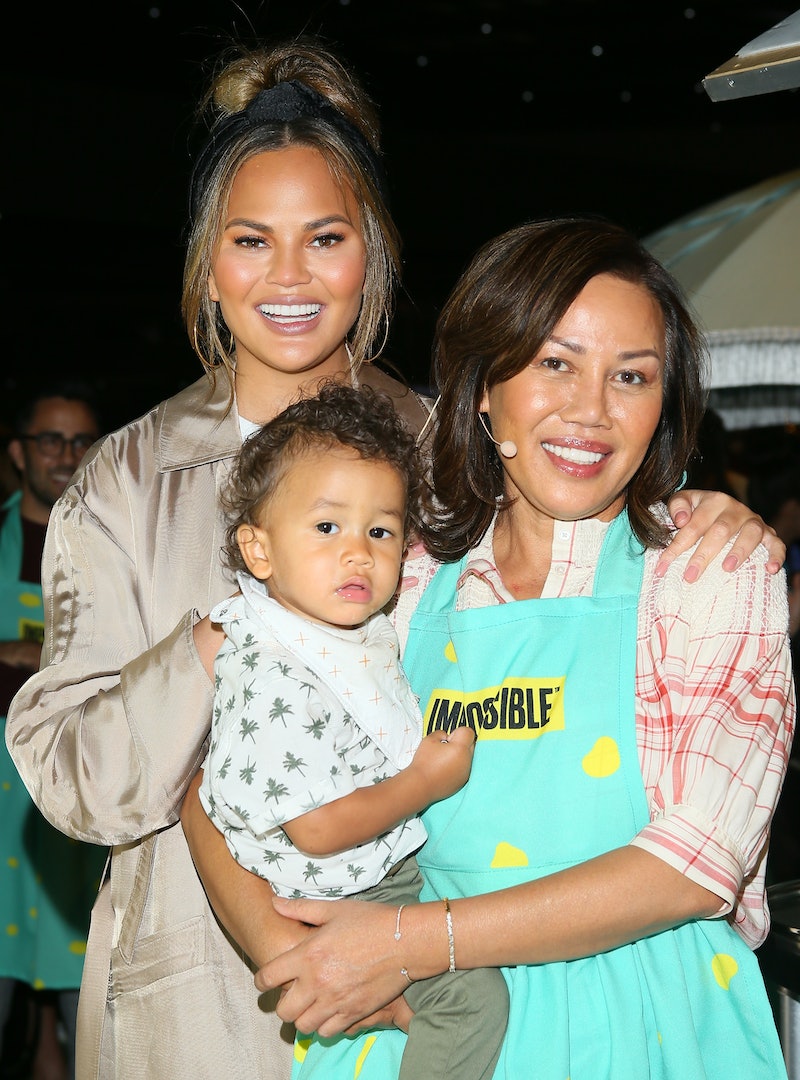 One day after the cookbook author shared the tragic news that she had lost her third child, Chrissy Teigen's mother opened up about her daughter's pregnancy loss with a heartbreaking post on Instagram. After keeping fans updated on her "difficult" pregnancy throughout her weeks of bed rest and time in the hospital, on Wednesday, Sept. 30, Teigen and husband John Legend shared that they had lost their baby due to complications caused by the Cravings founder's "weak placenta."

In the wake of the tragic news, Vilailuck Teigen — who is also known to her daughter's millions of followers as Pepper Thai — shared photos and videos from the hospital, where she said her final goodbyes to to the baby boy the couple were planning to name Jack. "My heart aches," Vilailuck wrote, alongside a video from the hospital, where she held her grandson for the first and final time. "love you so much baby Jack." She concluded her post with the hashtag "สู่สุขตินะลูก," which reportedly translates from her native Thai into English as a wish "to happiness."

Teigen had been incredibly open about her "unexpected" third pregnancy, as her older children, Luna and Miles, were conceived through IVF. Barely two weeks ago, despite being put on "super serious bed rest" due to the complications she was experiencing, she told followers that the baby was "healthy" and doing well; however, on Sep. 28, Teigen was admitted to the hospital as a result of experiencing bleeding and underwent multiple blood transfusions.

Unfortunately, Teigen wrote on Instagram, "we were never able to stop the bleeding and give our baby the fluids he needed, despite bags and bags of blood transfusions. It just wasn’t enough." She and Legend shared a series of devastating black-and-white photos from the hospital, explaining that they were "shocked and in the kind of deep pain you only hear about, the kind of pain we’ve never felt before."

Though the couple usually decide on their children's names "at the last possible moment," Teigen revealed that their third child's name came to them early on in her pregnancy, and held a special significance to them. "We, for some reason, had started to call this little guy in my belly Jack," she wrote. "So he will always be Jack to us. Jack worked so hard to be a part of our little family, and he will be, forever." She also shared a note to Jack himself, apologizing that "the first few moments of your life were met with so many complications, that we couldn’t give you the home you needed to survive. We will always love you."

She concluded her post by thanking all of her loved ones, fans and followers who have supported her throughout her pregnancy and shared their well wishes for her and baby Jack. "We feel all of your love and truly appreciate you," Teigen wrote. In response, the couple's famous friends like Kim Kardashian and Gabrielle Union shared messages of love and support, as have many of Teigen's social media followers, who noted that her posts made them feel less alone.

"We are so grateful for the life we have, for our wonderful babies Luna and Miles, for all the amazing things we’ve been able to experience," Teigen wrote. "But everyday can’t be full of sunshine. On this darkest of days, we will grieve, we will cry our eyes out. But we will hug and love each other harder and get through it."