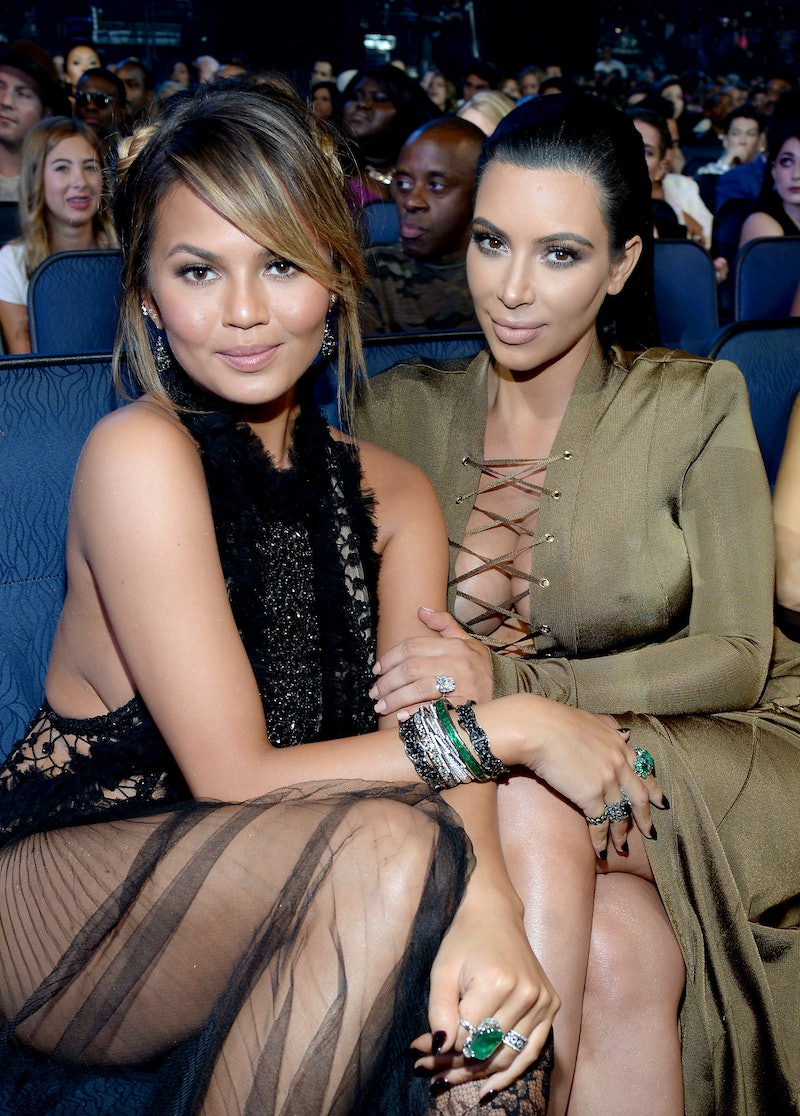 Chrissy Teigen doesn’t know what’s going on between Kim Kardashian and Pete Davidson, but whatever it is, she’s here for it. On Wednesday, Nov. 3, TMZ reportedly caught up with the Cravings cookbook author outside of her office in Los Angeles, where she was asked what she thought of the reality star’s rumored romance. “Everybody’s asking me!” she told the paparazzi. “I have no idea.”

The 35-year-old Lip Sync Battle co-host added that although she doesn’t “know either way” if the Skims founder is dating the Saturday Night Live star, she totally gets the appeal of dating a comedian. “Funny guys do a lot,” Teigen noted. “Look at John [Legend] — he’s hysterical.” The musician, who married Teigen in 2013 and shares two children with her, obviously agreed. “I’m hysterical,” he reportedly said. “Who wouldn’t want to be in love with a funny guy?”

Next, Teigen was asked if she would ever consider going on a double date with the rumored couple. “I have no idea if it’s true, so I can’t say,” she answered. So far, neither Kim nor Pete have confirmed any sort of romantic relationship, but the author thinks it makes sense that the former Keeping Up With the Kardashians star would want to date someone fun following her split from Kanye West. “Humor is the way to a girl’s heart,” she said, adding that it’s “what John knows best.”

The 27-year-old’s sense of humor may not be the only thing that’s piquing Kardashian’s interest, though. When Teigen was asked if Davidson’s BDE (aka big d*ck energy) may have captured Kardashian’s, she said that BDE is “definitely a thing” and that it was “probably” a factor. The term, which is used to describe someone who exudes confidence, was born when Ariana Grande and she made an interesting comment about Davidson’s size while they were dating. BDE or not, though, Teigen plans to just “let them be,” although she’s not ruling out a double date in the future. “I wouldn't mind, no,” she said.

Teigen’s comments came shortly after reports surfaced that Kardashian and Davidson went on a secret dinner date in the comedian’s hometown of Staten Island, New York, on Tuesday, Nov. 2. The two reportedly went to Davidson’s favorite pizzeria, Campania, where they were escorted through the back entrance. The duo met up again on Wednesday, Nov. 3, with several friends for dinner at Zero Bond in New York City.

Kardashian and Davidson first sparked romance rumors when they were spotted holding hands on a roller coaster at Knott’s Berry Farm late last month. Prior to that, they shared a kiss during an Aladdin-inspired sketch when the reality star hosted SNL on Oct. 9. Despite all of their recent hangouts, the two are said to be “just friends.” “No one really knows what is going on with Kim and Pete,” an insider told Us Weekly. “They are just friends right now, but things could turn romantic.”