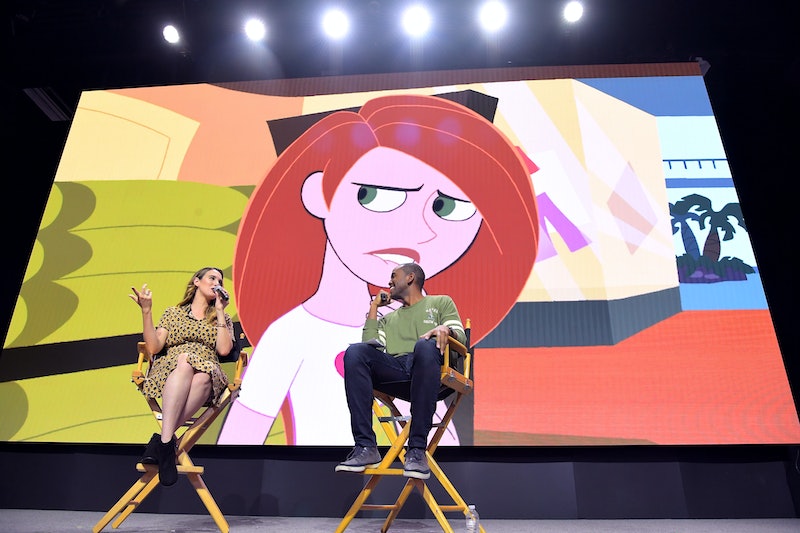 Christy Carlson Romano has been spilling very hot tea. In recent months, the Disney alum has been candid about why she doesn’t speak to her Even Stevens co-star Shia LaBeouf, how she lost her Disney Channel money, and now, how she wants a Kim Possible reboot just as much as you do. In a YouTube video titled “Why I Can’t Let Go Of Kim Possible” posted on Sept. 14, Romano explains exactly that, making it clear to Disney that she’ll be “devastated” if she’s not recast as the animated superhero if a reboot were to ever happen.

Opening the video with Kim’s iconic tagline “So here’s the sitch,” Romano went on to tell the story of Kim Possible, from how she got the role (she was already on Even Stevens, but Disney still made her audition) to the show’s enormous global impact — even on her own life. “At the time, portraying her was kind of tricky because I probably wasn’t in the most confident time in my life,” she said. “But ultimately, when I went into the booth, I felt capable and confident, like I could save the day. And that mattered to me ... to see it actually drawn and illustrated and portrayed onscreen, I mean, there’s just no kind of magic like that.”

Her attachment to the stylish character means that Romano has been advocating for a reboot — as long as she gets to voice Kim: “If they ever brought it back and I wasn’t the voice and they recasted me, I would be devastated. I would be absolutely devastated. And I hope that never happens. I really hope that since it is a cartoon, and my voice is the same voice, that would be considered.”

In the video, Romano revealed that she has brought up this possibility to the original show’s creators, adding that the entire voice cast, who she keeps in touch and reunites with at Comic-Con events, would love to reunite onscreen. “I’ve kind of chatted to the creators and said, ‘Guys, this is really my intention here, please’,” she said.

This isn’t the first time that Romano has advocated for a reboot of Kim Possible — or her other famous Disney projects. In March 2021, amid (false) rumors that Hannah Montana would be rebooted for its 15th anniversary, Romano poked fun at Disney for not rebooting any of her shows or movies in a TikTok video. “Pick one. Any one. Even Stevens? Cadet Kelly?? Kim Possible???” she captioned the post. In fairness to Disney Channel, the network brought back Kim Possible in the form of a 2019 live-action movie, with Romano making a special cameo, but she seems ready to get back into the voice booth.

When Kim Possible celebrated its 15th anniversary in 2017, the star spoke to MTV News and gave her opinion on what a reboot should look like. According to Romano, a new show should pick up where the original series left off, with Kim and her BFF-turned-boyfriend Ron Stoppable going to college together. Eventually, the series should see them marry and have kids, perhaps even twins, as it runs in the Possible family line given Kim’s little brothers Jim and Tim. If Disney is stumped on how to approach a reboot, Romano can help them out.

More like this
The 'Kenan & Kel' Reunion On 'SNL' Took A Dramatic Turn, Thanks To Keke Palmer
By Brad Witter
The First Trailer For 'That '90s Show' Includes So Many Nods To The Original Series
By Jack Irvin, Alyssa Lapid and Grace Wehniainen
Twitter Is Very Torn About The Winner Of 'Dancing With The Stars' Season 31
By Jake Viswanath
Then Vs. Now Photos Of The 'Enchanted' Cast In 2007 & The Sequel's Stars In 2022
By Marina Watts
Get Even More From Bustle — Sign Up For The Newsletter