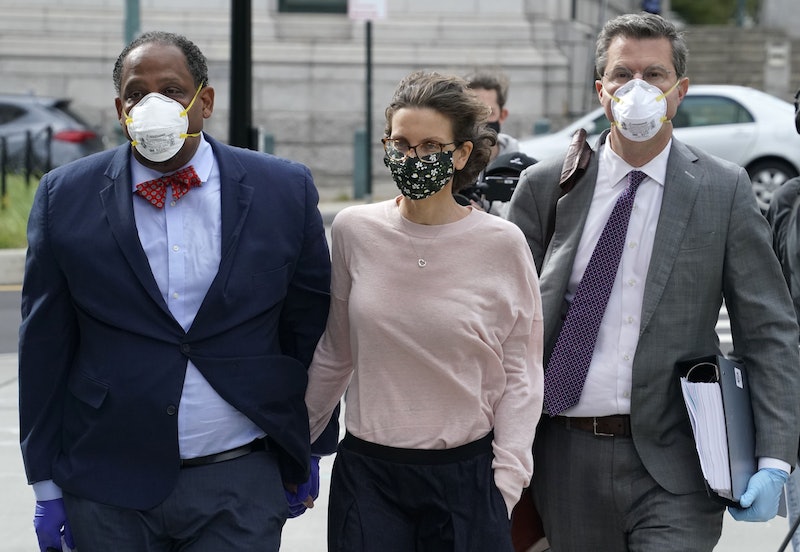 Ahead of founder Keith Raniere's scheduled sentencing on Oct. 27, one high-ranking member of NXIVM is heading to prison. On Wednesday, Sept. 31, Clare Bronfman was sentenced to 81 months in prison due to her involvement with NXIVM, a "self-help" organization that has been accused of sexual abuse, human trafficking and cult-like operations. The Seagram's liquor heiress pled guilty to charges related to identity theft and immigration fraud in April 2019, and was accused of using her wealth and influence to recruit people into the organization, as well as harassing and silencing former NXIVM members.

"I am troubled by evidence suggesting that Ms. Bronfman repeatedly and consistently leveraged her wealth and social status as a means of intimidating, controlling, and punishing" Raniere's enemies, Judge Nicholas G. Garaufis, who presided over the hearing, told the court, per the New York Times. "I don’t know how many other multimillionaires are out there, ready to devote the limitless resources at their disposal to supporting pyramid schemes run by dangerous criminals."

According to prosecutors, Bronfman — who along with her sister Sara, used their considerable fortune to help fund NXIVM and its operations — recruited a young woman from Mexico to work for a NXIVM-affiliated company and filed for a visa on her behalf using false information; once the woman arrived in the United States, she was allegedly told by Bronfman that she would have to "earn" her visa through unpaid work. Bronfman has also admitted to committing tax evasion on Raniere's behalf, using a dead woman's credit card to pay for company assets.

Bronfman and her sister first became involved with NXIVM in the early 2000s, and she maintains that her involvement with the organization and Raniere has positively impacted her life and success. In a letter sent to the judge on Aug. 28, she wrote that "many people, including most of my own family, believe I should disavow Keith and NXIVM, and that I have not is hard for them to understand or accept. However, for me, NXIVM and Keith greatly changed my life for the better." (Sara was never criminally charged for her involvement with NXIVM, and currently lives in Europe with her husband and daughter.)

Though she was never a member of DOS, the secret "female empowerment" group within NXIVM that allegedly recruited women into master-slave relationships, groomed them to have sexual relationships with Raniere and forced them to turn over "collateral" that was used as blackmail, Bronfman played a key role in the organization's operations, including alleged retaliation against defectors. As documented in the HBO docuseries The Vow, she allegedly used her wealth to fund both NXIVM and many lawsuits against perceived enemies and former members of the group in order to silence and discredit them.

Nine former NXIVM members spoke at Bronfman's sentencing where, according to the NY Times, they said that the heiress has sued them relentlessly — some even to the point of bankruptcy — and claimed that she had false criminal charges filed against them. Though she admitted to making "mistakes," in a statement given in court, Bronfman still has not denounced Raniere or NXIVM, and stands by the controversial leader.

This is just the first in a long line of expected sentencing of NXIVM officials. Former president Nancy Salzman, her daughter (and alleged DOS recruiter) Lauren Salzman, former bookkeeper Kathy Russell, and DOS founder Allison Mack all pled guilty to charges related to their involvement with the organization in 2019. Raniere was convicted on charges of sex trafficking, conspiracy and conspiracy to commit forced labor in July 2019, and faces a possible life sentence.

More like this
Where Is Armie Hammer’s Ex-Wife Elizabeth Chambers Now After 'House Of Hammer'?
By Grace Wehniainen and Radhika Menon
What Is 'Pretty Wild' Star Tess Taylor Up To Now?
By Morgan Leigh Davies
Confusion Reigns After Kanye Changes His Instagram Profile Pic To Kris Jenner
By Jake Viswanath
Kylie Jenner Goes Into Labor & Welcomes Her Baby On 'The Kardashians'
By Jake Viswanath
Get Even More From Bustle — Sign Up For The Newsletter