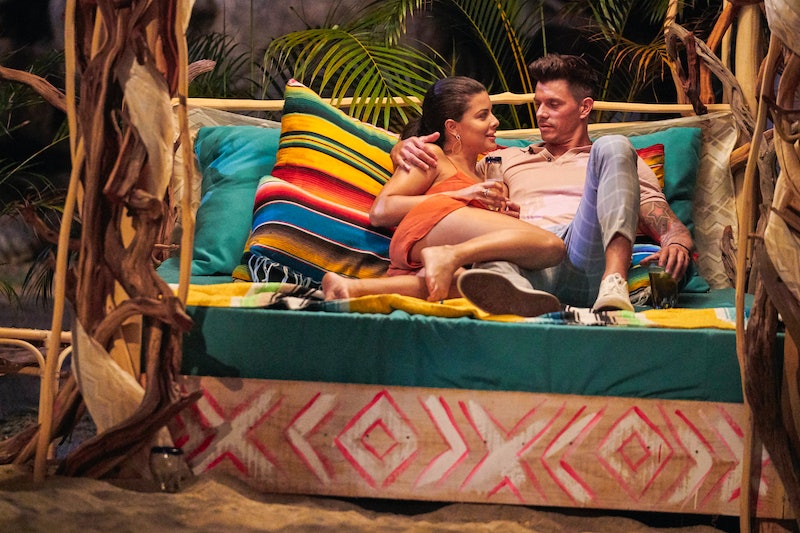 From the second they met on the beach, Bachelor in Paradise contestants Kenny Braasch and Mari Pepin forged an instant connection. Kenny, in particular, was so enamored with her that he shielded his fellow contestants’ eyes from Mari upon her arrival — a very physical calling of dibs. The budding couple leaned into the laidback vibes of the beach, spending time together and talking about their compatibility right away. (Mari, a marketing director, told Kenny that she prefers to date older guys, which was good news for Kenny, who is 40 and proud.)

Now, the couple is finally together for real after getting engaged on the Oct. 5 finale — but it’s been a long time coming. Though Kenny and Mari’s quick coupling allowed them to bypass much of the early BiP drama, their beach bliss was tested when Demi Burnett made out with Kenny right in front of Mari, who accused Demi of betraying her (they had just shared a heart-to-heart about Mari’s ambivalence). Mari even threw Demi’s cake in the beach bonfire in anger. The drama continued when Tia entered the love triangle-turned-square, and the relationship seemed more precarious than ever.

Despite all these obstacles, though, Kenny and Mari reconciled in the Sept. 7 episode and decided they’d be happy leaving the beach together. They didn’t do that, of course (we’d have missed out on that bizarre steamy taco date), but the message remained the same. They committed! “I’ve been about you the whole time ... what I wanted was to feel 100 percent at the end of this,” Mari told Kenny at the time. “And going through this gave me that.” And Kenny, for his part, apologized (sort of) for spending so much time with Demi, which he was not expecting to do. On Oct. 5, they confessed their love for each other during their overnight date, and got engaged hours later.

Of course, the clues were there all along if you looked close enough. The first came by way of a June 30 report from spoiler-happy Reality Steve, who wrote that Kenny and Mari would get engaged by the end of the season. But if you didn’t want to bet on Steve’s intel (which also foretold the Kenny-Demi-Mari love triangle), there were even more clues about Kenny and Mari’s current relationship status.

As Cosmopolitan pointed out, BiP itself might have hinted toward the engagement with an inadvertent trailer shot, as relayed via the bachelornation.scoop Instagram. In the show’s Aug. 16 promo, someone could be seen holding a ring box. Even though you couldn’t see the unidentified figure’s face, they were sporting a chain that looked a lot like Kenny’s, pointing toward a potential match for the model-slash-boy band manager by the end of Season 7.

Though Kenny and Mari haven’t been spotted together in the weeks since BiP finished filming, a diary entry she recently posted on Instagram potentially pointed to something significant between the couple. “Decided to share parts of my BiP journal,” Mari wrote, sharing her thoughts about arrival day.

Most of the details were unremarkable — “It’s really hot here,” she wrote — but others were blacked out entirely, suggesting that Mari’s thoughts from that first day could be seen as spoilers. Due to the mention of quarantining, it looked like Mari’s entry might refer to a time between arriving on the island and meeting her fellow contestants. But even if this wasn’t from the exact day she met Kenny, the obstructed text still seemed to suggest something spoiler-y about their relationship. As franchise alum Bibiana Julian told the Us Weekly Here for the Right Reasons podcast, gossip about who’s who on the beach tends to fly. “The girls probably talked to one another,” she explained, “you kind of hear rumors of, like, ‘OK, this person is going to be there. This person is going to be here.’”

Another Instagram clue pointed to a comment by Demi on Mari’s Aug. 30 Instagram post, in which Mari poses with a cake sans shirt. “Riley is somewhere fuming,” Demi joked, seemingly conveying that the women are OK with each other. That definitely didn’t confirm Mari and Kenny’s relationship, but if they didn’t end up together, wouldn’t it have been difficult to be friendly with the third point in your tumultuous triangle?

After all the clues and drama, it looks like this is one successful BiP couple. Now that the show’s over, expect to see more social media pics from the pair soon.