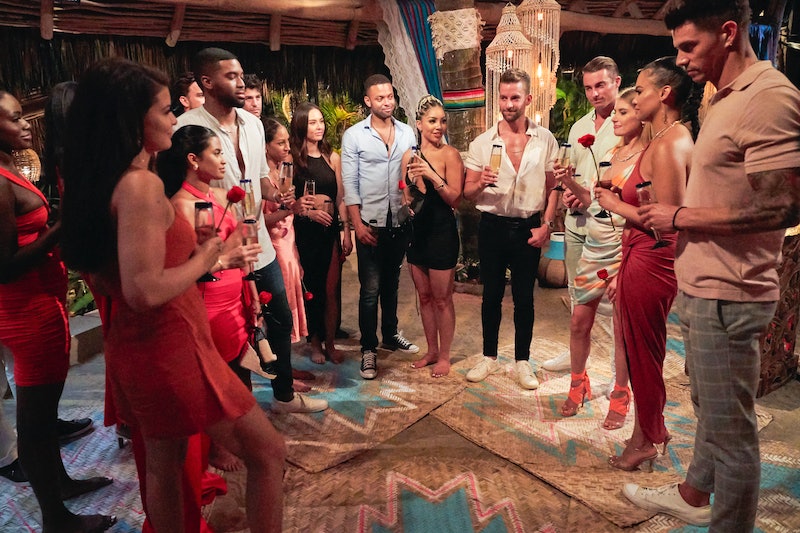 Following a delightfully dramatic Episode 2 of Bachelor in Paradise — in which Brendan Morais was questioned about his alleged off-screen connection with Pieper James, and Victoria Paul sent herself home early for similar sketchiness — a promo promised even more conflict to come. The arrival of two new contestants from past Bachelorette seasons, Riley Christian and Thomas Jacobs, is sure to stir things up. It also gives analytical viewers a chance to narrow down when this season of BiP was actually filmed.

According to all-knowing Reality Steve, filming for BiP Season 7 kicked off the weekend of June 5, and production lasted for three weeks. A report from Yahoo confirmed the timeline, explaining that production officially wrapped on June 26. Clues from the contestants also point to a similar schedule — as The Dipp observed, Jessenia Cruz’s Instagram saw a posting break between May 29 and July 8, the day her casting was confirmed.

Aside from the obvious interruption caused by COVID in 2020, BiP has traditionally aired right after The Bachelorette ends every summer, so the brief filming window (perfect for a quick turnaround) isn’t that new or surprising in itself. But in the specific case of this season’s enticing BiP chaos, the timeline does add to the drama of new arrivals on the beach.

Thomas most recently appeared on Katie Thurston’s season of The Bachelorette, which was actually filmed back in March, and didn’t leave on the best of terms, to put it lightly. After admitting to his fellow contestants that he had, indeed, considered “potentially being the next Bachelor” while competing for Katie’s affections, he was quickly sent home. As Katie told him, “Your Bachelor audition ends tonight. So get out.”

But because Thomas’ elimination didn’t air until June 28 — by which point BiP had already wrapped filming — the current contestants would have had no idea about his ulterior franchise ambitions. This could be why the episode promo shows Thomas being warmly received by the women on the beach. As Serena Pitt put it, “Someone is making out with this guy. I’ll be OK if it’s me.” (Cut to a very sad Grocery Store Joe.)

So, the BiP filming timeline might have led to some of the contestants being oblivious of Thomas’ past drama and scheming adjacent to “rose-chasing,” to borrow a term from Tammy Ly. But don’t expect the blissful ignorance to last for long. Already, it seems that the men are planning to group together and confront Thomas. None of them would be happier to see Thomas go than Karl Smith, of course. Back in Katie’s season of The Bachelorette, Karl correctly observed that there might be some ill-intentioned players in the group. However, because he never called out a specific name, the men rallied against him for causing drama, and he was ultimately sent home before Thomas was exposed. Now, it looks like the tables might be turning in Paradise.