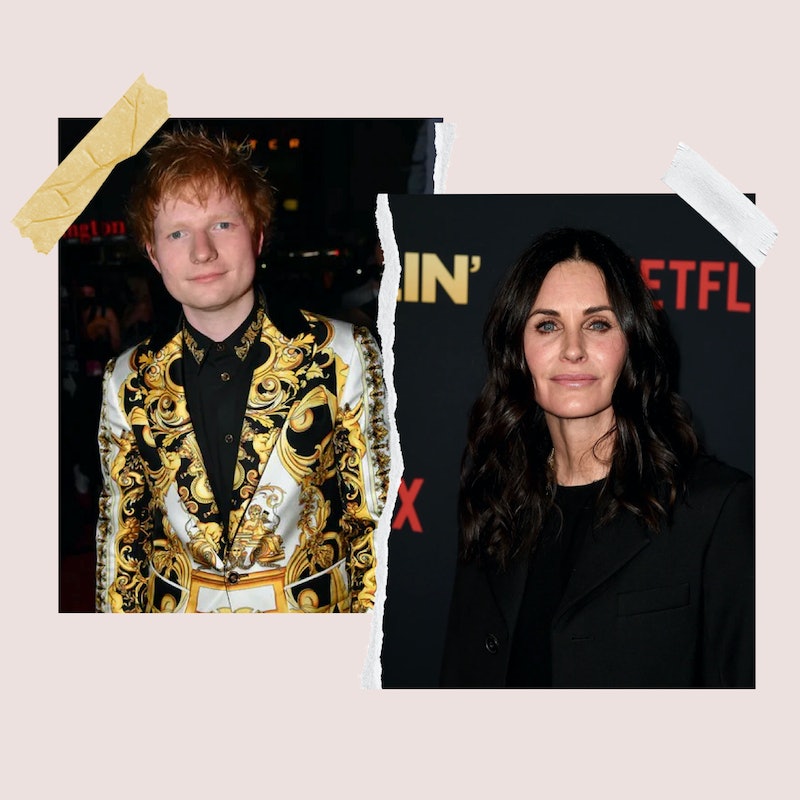 “Smelly Cat” creator Phoebe Buffay isn’t the only aspiring musicians on Friends. Courteney Cox apparently sings backup vocals on Ed Sheeran’s new album = (pronounced Equals), according to the “Bad Habits” singer — but he’s not entirely sure which song she’s on. At the 2021 MTV Video Music Awards on Sept. 12, Sheeran told Entertainment Tonight that his good friend Cox sings on his upcoming album, which comes out Oct. 27. “She sings,” he said. “I’m pretty sure she sings on background vocals on the album. I think she’s on ‘Visiting Hours.’”

Sheeran wrote “Visiting Hours” in tribute to his late close friend and mentor, Australian music mogul Michael Gudinski, and released the song on Aug. 19, when his fourth solo studio album was announced. The iconic Kylie Minogue, who was signed by Gudinski at the start of her career, sings backup on the song along with other singers, but Cox’s name is not listed as a background vocalist, according to listings on Tidal and Genius. Sheeran is aware that he may be mistaken, but he remains confident that Cox sang backup somewhere on the new album as well as on a previous project. “If not, she was definitely on [my last album] ÷ (Divide) somewhere,” he said.

Bustle has reached out to Sheeran’s record label for clarification.

Looking at Sheeran’s 2017 Divide album credits on lyric analysis site Genius, she is no where be found. But Cox is credited on “Afire Love” on his 2014 Multiply album under “Additional Vocals” and “Gang Percussion.” The song is about his grandfather’s death.

“Afire Love,” which was released seven years ago, has 73 million YouTube views.

Their friendship may be surprising to some, but they go way back. As Sheeran told ET, Cox’s longtime boyfriend Johnny McDaid is one of his frequent collaborators, who has helped co-write and co-produce some of his most popular hits. "Well, my producer and songwriter, Johnny [McDaid] is dating her,” he explained. “We wrote ‘Shape of You’ together. We wrote ‘Bad Habits’ together. We work together a lot.” As a self-proclaimed Friends fan, it’s no surprise that Sheeran has made the most out of his connection with Cox.

Sheeran and Cox have surprised fans in recent months by displaying their friendship. In May, the dynamic duo recreated Cox’s infamous New Year’s dance from Friends, in response to him not being featured on HBO Max’s Friends: The Reunion special. In June, she helped him tease the release of “Bad Habits” by assisting him on the piano. They also joined forces with Brandi Carlile and Elton John for an impromptu rendition of “Tiny Dancer,” which they dedicated to Kudrow.

In a June interview on The Late Late Show with James Corden, Sheeran explained the NSFW prank that he often pulls on Cox. After she told him she could buy anything she wants from her Amazon Alexa speaker, he tested it out by ordering an “S&M leather gimp mask.” Now, he just won’t stop. “Every time I go back there, I order her another gimp mask,” he said. “I hide them in people’s bedrooms. So they’ll go in a drawer, and they’ll just find this leather S&M mask.”

More like this
Hilary Duff's Husband Matthew Koma Has Her Name Tattooed On His Butt
By Jake Viswanath and Stephanie Downs
The Jonas Brothers' New Album Has A Very Meta Name
By Alyssa Lapid
Cruz Beckham Teased New Music With An Adorable Nod To Mom Victoria Beckham
By Stephanie Topacio Long
Britney Spears Shares & Deletes Photos Of Justin Timberlake From 22 Years Ago
By Jake Viswanath
Get Even More From Bustle — Sign Up For The Newsletter
From hair trends to relationship advice, our daily newsletter has everything you need to sound like a person who’s on TikTok, even if you aren’t.