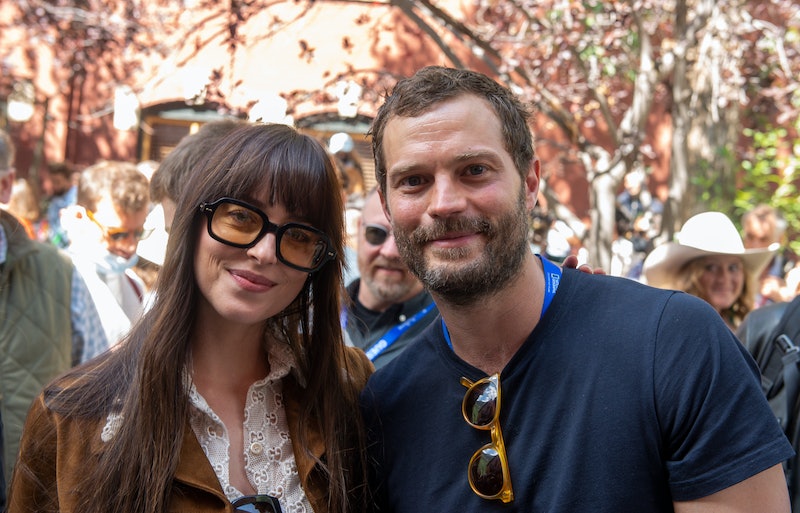 When it comes to instantly iconic celebrity moments, fall film festival season is the gift that keeps on giving. The Venice International Film Festival brought us Zendaya in that mesmerizing Balmain dress, Oscar Isaac and Jessica Chastain’s steamy shoulder kiss, and a stylish display from Gyllenhaals Jake and Maggie — and stateside, the Telluride Film Festival is providing just as much to talk about. Exhibit A: a surprise reunion between Fifty Shades of Grey stars Dakota Johnson and Jamie Dornan.

Both actors were at the Colorado festival promoting their respective projects. Johnson is starring in The Lost Daughter, an Elena Ferrante adaptation helmed by writer-director Maggie Gyllenhaal in her filmmaking debut. And Dornan’s latest role is in Kenneth Branagh’s Belfast, which just had its world premiere at Telluride. While they were both in town for the weekend, Johnson and Dornan got together and posed for several photos Sept. 4, People reported. They both sported laidback looks — with, somehow, three pairs of shades between the two — and Johnson donned a very fall-ready brown jacket.

As E! News pointed out, Johnson and Dornan haven’t actually been photographed together since the 2018 premiere of Fifty Shades Freed — making their latest reunion at Telluride that much sweeter to see. Of course, since starring together, the pair’s resumes have diverged from the sultry mold in a major way.

In addition to The Lost Daughter and another highly anticipated adaptation — the upcoming film Persuasion for Netflix — Johnson has taken on a variety of low-key, indie projects like Our Friend and The Peanut Butter Falcon. Dornan, for his part, has continued playing the leading man but in very different (and very whimsical) ways — from the vibrant musical charm of Barb and Star Go to Vista del Mar, to the delightfully oddball Wild Mountain Thyme, whose gentle romantic hero was a little bit closer to Dornan’s own heart.

“He's much more relatable to me than Christian Grey," Dornan told Entertainment Weekly in December. "Oftentimes, I felt quite uncomfortable, being very honest with you, playing Christian Grey ... With [Wild Mountain Thyme’s] Anthony, I just knew really early on I need to embody this guy, and it felt like someone I wanted to be close to. There was no distance there ... It's cool to know that you can play a romantic lead that is very different from the more widely known romantic lead you played.”

Even though they’re both busy as ever with other projects, seeing Johnson and Dornan together again definitely delivers a surprise burst of nostalgia. And of course, the festival fun is only going to continue from here — the Toronto International Film Festival, for example, kicks off Sept. 9 — so here’s hoping for even more surprise celebrity run-ins and style moments this season.