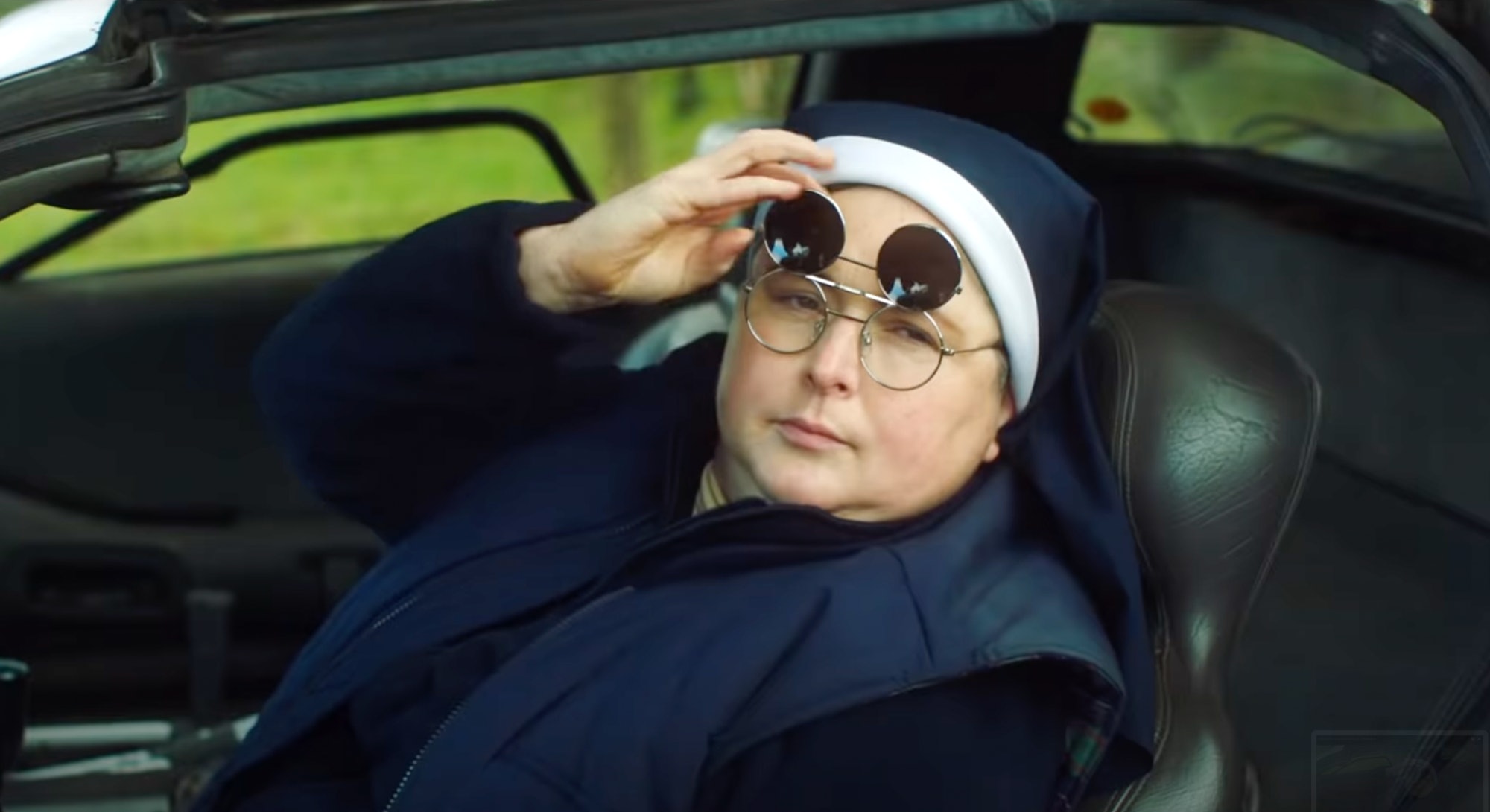 If ever there was a breakout star of a show, it’s Sister Michael of Derry Girls. Famed for her no-nonsense approach to the education of Our Lady Immaculate College’s girls (and the wee English fella!), the headmistress is a force to be reckoned with. From her cutting remarks to her disdain for the musical numbers during the school assemblies, Sister Michael (Siobhán McSweeney) makes no effort to hide her overexaggerated eyerolls. And we wouldn’t have her any other way. Derry Girls’ Season 3 kicked off with Sister Michael at her best: evoking panic among Clare Devlin (Nicola Coughlan) and her pals by implying they had failed their GCSEs. When asked why she did such a thing, the nun replies, “Bit of a slow day.” Classic. Although Sister Michael appears too good to be true, she happens to have a real-life counterpart. Well, kind of.

Somewhat foreshadowing the on-screen school days they would share with each other, Saoirse-Monica Jackson, who portrays aspiring writer Erin Quinn, and Jamie-Lee O’Donnell, who brings everybody’s favourite wild child Michelle Mallon to life, both studied at St Cecilia’s College in Derry. And their drama teacher, Greta McTague, made a lasting impression — not too dissimilar from the one a certain nun leaves on our favourite gang. “Jamie-Lee and I have discussed this between the two of us many times: how much of an amazing impact Ms. McTague had on the both of us,” Jackson tells me. “And she was very like Sister Michael.”

“I would write plays and obviously cast myself as the main character,” Jackson laughs, recalling her time studying A-Level drama. “Ms. McTague was always very good at clipping those wings a bit. She’d say, ‘It’s not going to be like that forever, you know? If you want to do something, you have to understand the concept of healthy competition.’” Making the comparison to Derry Girls’ headmistress, the actor notes: “I feel like that’s what Sister Michael emulates to me: that amazing relationship that I had with McTague, who’s extremely supportive now, but she made me fight for things, and she never gave me anything easily.”

For Jackson and O’Donnell, Sister Michael, much like their beloved former drama teacher, plays a vital role in the lives of Erin, Michelle, and their pals. She’s far more than just a witty no-nonsense headmistress who strikes the fear of God into them. Instead, the nun is making sure the girls are equipped with the tools needed to grow up in the heart of the Troubles. “There’s a responsibility that falls on the adults around these young women,” O’Donnell explains. “Yes, they want them to flourish and dream big, but [the girls] also must understand that life isn’t always normal. Life isn’t always going to be easy. It’s tough.” This is a notion the Derry-born actor can relate to all too well. “You need to be prepared for the world, and Sister Michael does that really well. And with her own flair and comedy,” O’Donnell tells me. “I think others who have a similar background to us [will relate]. There’s a reality check that has to come into play every so often just because of the nature of where we live.”

I feel like that’s what Sister Michael emulates to me: that amazing relationship that I had with McTague, who’s extremely supportive now, but she made me fight for things, and she never gave me anything easily.

And while Sister Michael is consistently telling the girls off due to finding them in various compromising situations, O’Donnell thinks the character brings out a much-needed rebellious spirit within the girls. “There is a positivity in being able to stand up for yourself and it’s a real strength of character, especially for women here [in Derry],” the actor notes.

Meanwhile, Jackson believes Sister Michael represents a telling aspect of the culture that’s heartily explored within the show. Of the nun’s ability to deliver a swift — and often uninvited — reality check, the actor remarks: “It says a lot about Irish culture. About [not] having notions and ideas above your station, which sometimes I don’t like. It’s great to have ideas above your station; that should be encouraged. But at times, you do need to have limits upon your own ego and listen to what else is going on.

“That’s what Sister Michael does. She never gives the girls a real sense of security. She always forces them to fight for what they want, and fight for their opinion, and that’s very true of teachers in Derry.”

In classic Michelle form, O’Donnell adds: “For some reason, we [the gang] always end up in the same room as Sister Michael. So there’s obviously a draw there… we just can’t leave her the f*ck alone.”

Meanwhile, in line with the end of Season 3, fans are eagerly anticipating what will happen next with the gang. And it just so happens that Dylan Llewellyn, who plays James “The Wee English Fella” Maguire, has an idea for a Derry Girls sequel. “It would be awesome to see a spin-off. Sister Michael solving crimes or something,” he tells me earnestly.

As for us, we’d like to see Sister Michael put her natural detective skills to good use by joining Line of Duty’s AC-12 gang. Mother of God, can you imagine Sister Michael and Ted Hastings sharing the screen? Alexa, play The Cranberries’ “Dreams” as we imagine the beauty of this.