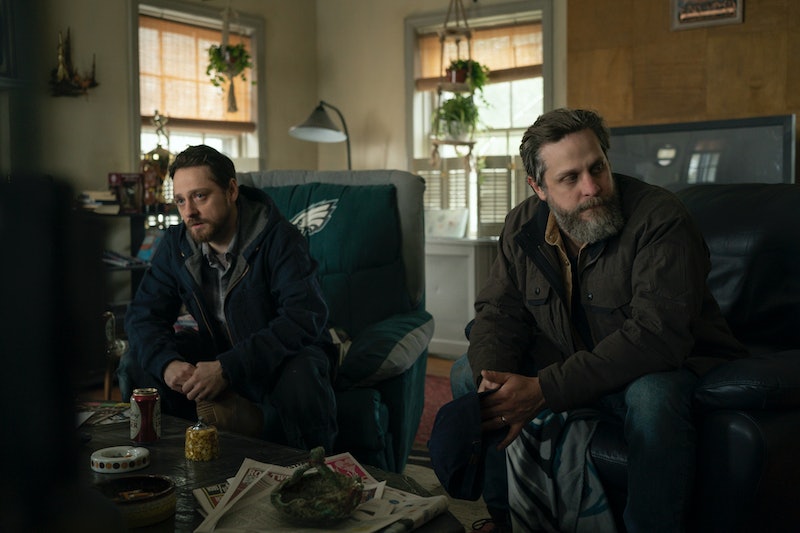 Spoilers and extreme speculation ahead for Mare of Easttown Season 1, Episode 6. Suspicion around Billy being DJ’s father on Mare of Easttown has been building for weeks now. There was the shifty way he went limp to Kenny’s embrace, and then there was the time he downplayed the months Erin lived at his house. When he leaves a half-drunk bottle of Rolling Rock on Mare’s coffee table — blasphemy in Delaware County — the detective stares it down so hard I thought perhaps her naked eyes were capable of DNA testing. But this week on Mare of Easttown, Billy went from Baby Daddy Suspect No. 1 to Erin’s admitted killer. Or did he?

When the episode opens, it’s family reunion week again for the Rosses. Except instead of renting cabins by the lake, the Ross brothers are bunking up at their dad’s house. Pat isn’t too happy to see them. Billy has taken up residence in the basement, where he drinks too much. John — recently evicted by his wife for yet another affair — drags in a mattress upstairs. The antipathy between the brothers is of the spoken variety, a welcome surprise in a town that seems to specialize in repressed emotions. When Billy accuses John of messing up his life again, it’s hard to disagree.

But Pat sees something else in Billy’s sudden edge and eventually confesses to John that on the night of Erin’s murder, he saw Billy covered in blood. John seems intrigued but not shocked. Maybe nothing shocks John. In the opening moments of Episode 2, Lori told him that his cousin’s daughter was dead. “Kenny’s Erin?” he asked absent-mindedly, as if his world of 100 people could possibly contain too many Erins to keep track of.

Still, when John confronts Billy, Billy says out loud that he did it. Then John tells his estranged wife, Lori, that they need to hide the revelation from her best friend, Mare — but why tell Lori in the first place? When Billy shakily declares that he’s ready to confess, John suggests a fishing trip instead. Is this one last hurrah of brotherly love, or is he going to dissuade Billy from going to the police at all?

Back in town, Lori immediately tells Mare everything, and Mare sets out for the lake to confront Billy. So far, so predictable. But when Jess charges into the police station holding the photo she swiped from Erin’s journals, the chief urgently attempts to call Mare off. The audience doesn’t get to see who is in the image, but honestly, there’s only one possibility that lends itself to such alarm: John.

What if John Ross — not Billy — is the “Ross” on the jewelry store receipt for the gold necklace? What if it was John’s name — not Billy’s — that Erin was threatening to announce as DJ’s father if he didn’t help her pay for his baby’s surgery? And what if, when Billy accused John of not cleaning up his life, he was referencing the night his brother asked him to help cover up his cousin’s daughter’s murder? It’s an equally incestuous possibility, yet somehow worse. The question of why Billy would agree to take the rap for John is admittedly wide open, and we have very little insight into how their relationship works. But maybe it’s as simple as this: John has a wife and kids. If the basic unit of existence in Easttown is family, Billy going down for John’s crime will do his less damage.

Of course, I would be remiss if I did not to point out that Dylan was acting extra murdery this week. It’s hard to guess what his role in all of this could be if he didn’t kill Erin. Maybe he’s just part of the cover-up. Is he perhaps also John’s kid? That would make him DJ’s brother. Or what if Dylan killed Erin, and that’s who Billy is covering for? His secret nephew! Just thinking out loud here.

Regardless, Katie Bailey’s reappearance last week hinted that maybe there was an outsider behind Easttown’s violence; now we know for sure that Erin’s killer is someone from inside her life. This strikes me as how it always had to be. What separates this gritty female detective drama from the next is Easttown: the rhythm of life there, the interconnectedness of its fates, the futility of keeping secrets in a world so small. At this point, no matter who murdered Erin McMenamin, the identity of her killer will be yet another trauma for this town to bear.