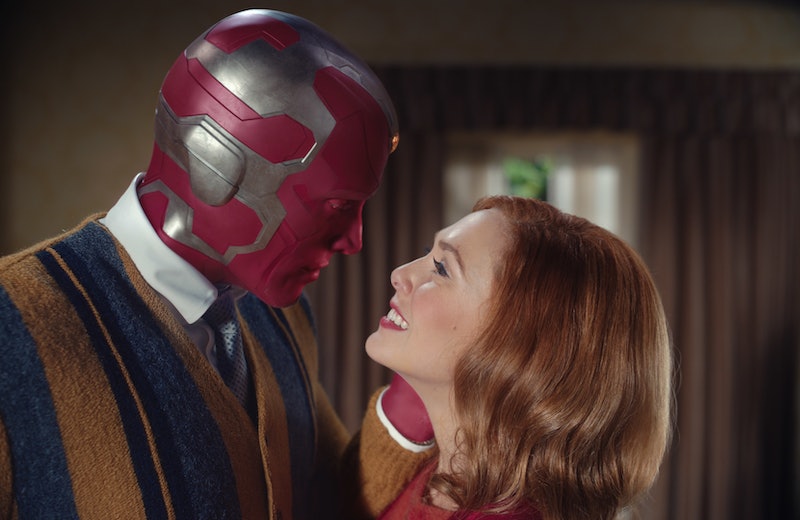 If you've been on the internet at all in the last week, you've probably heard about Disney+'s perplexing new show WandaVision. It's a weird and layered series unlike anything the Marvel franchise has done before, which might make it appealing to those who haven't seen the movies or have only vaguely been keeping up with them. The problem? Marvel has a long, complicated, and interconnected mythology that makes it difficult to just jump immediately into the story. It's not impossible; you're just going to need this primer.

First Things First: What Is WandaVision About?

At it's most basic level, WandaVision follows superhero sweethearts Vision (Paul Bettany) and Wanda Maximoff (Elizabeth Olsen) as they settle into their new town of Westview. It's filmed like a sitcom, including commercial breaks, laugh tracks, and plenty of corny hijinks. Bettany and Olsen are charming together, and their attempts at fitting into the ideal All-American lifestyle while hiding their superpowers are strange yet surprisingly fun.

But a lighthearted comedy, this is not. Following in the footsteps of Pleasantville and The Truman Show, Wanda and Vision seem to be stuck in a fake reality: one that spans decades, has intrusive bursts of color, and is populated with neighbors who may not be who they say they are. There are a lot of theories for why this is, but they all go back to the Marvel movies and the original comics.

Is There Anything I Need to Know Before Watching?

Yeah, a few things. WandaVision is a part of the Marvel Cinematic Universe (MCU), a film franchise that's been building out its interconnected movie universe since 2008's Iron Man. WandaVision takes place after Avengers: Endgame and feeds into the upcoming Doctor Strange 2.

Do I have to watch the movies first then?

Not necessarily! You can appreciate WandaVision as a complete MCU newcomer, but you'll either be extra confused or you need to learn some basic facts. A good place to start is the Marvel Studios Legends series on Disney+, which has two short episodes that are basically a supercut of Wanda and Vision's scenes in the MCU. Also: read this primer!

Let's start with the most basic question: who is Wanda Maximoff?

Also known as Scarlet Witch, Wanda was fully introduced in the second Avengers film, 2015's Age of Ultron. Wanda is from Sokovia, a fictional city near the Czech Republic that does not like the U.S. government. After her parents are killed by a bomb manufactured by Tony Stark Industries (aka Iron Man's company), she and her brother Pietro become anti-American protestors. They volunteer to be experimented on by HYDRA, the Nazi-like organization that opposes the Avengers. Through this, Wanda gains very vaguely defined superpowers: telekinesis, mental manipulation, and "neuroelectric interfacing" that allows her to fly, blast, and tear things apart with glowing red finger movements. (Director Joss Whedon clearly didn't know what to do with her, but her powers are conveniently undefined in the comics, too.)

After meeting Tony Stark and realizing HYDRA sucks, Wanda and Pietro join the Avengers. But Pietro dies in the battle against Ultron, and Wanda's barely controllable powers cause an international incident in Captain America: Civil War. (Long story short: she's unable to contain a bomb and it kills Black Panther's diplomats.) Struggling with both her grief and people's general mistrust of her, Wanda forms an attachment to her level-headed teammate Vision.

Ok, but who is Vision?

Vision is an android who was also introduced in Age of Ultron in order to fight the titular villain, Ultron. Fearing a repeat of the galactic invasion in the first Avengers, Tony Stark creates Ultron, a robotic Earth defense program. Of course, Ultron goes on the internet for all of a few seconds and decides humanity is too terrible to be left alive. Ultron easily bests the Avengers, so Tony decides to create yet another robot to oppose him. This somehow turns out fine: he and Bruce Banner (the Hulk) combine Jarvis (Iron Man's AI, voiced by Bettany), the Mind Stone, and a bunch of other unexplained coding into a half organic, half metallic body. Poof, Vision is born. He has super-strength as well as the ability to fly and phase through objects.

Vision naturally freaks everyone out, but his calm and noble nature eventually wins the Avengers over. He also becomes more human as time passes, falling in love with Wanda and learning how to cook a homey chicken paprikash to comfort her.

Wait, what is the Mind Stone?

A very important and powerful artifact. On its own, the Mind Stone allows the user to control others. It's one of six Infinity Stones — gems that, when united, can be used to reverse time, destroy solar systems, etc. They're really bad news, and in Avengers: Infinity War, the villain Thanos uses them to wipe out half the universe's population (which he thinks will solve poverty and climate change because he's never taken a sociology class).

But if Thanos had the Mind Stone, doesn't that mean Vision died?

Yes; twice, actually. In a heartbreaking Infinity War scene, Wanda uses her powers to kill Vision before Thanos can get his hands on the Mind Stone. But then Thanos simply reverses time and crushes the Mind Stone out of Vision's head. (The Mind Stone, along with the other Infinity Stones, were destroyed after Thanos used them.) The Avengers were able to bring half the universe back to life in Endgame, but that sadly didn't include Vision, who died before Thanos used the Stones.

So how is Vision alive in WandaVision?

That's the big question! When we last saw Wanda in Endgame, she was tearfully telling Thanos that he "took everything" from her. Yet in WandaVision, Vision is suddenly alive, and Wanda cheerfully calls him her "husband with an indestructible head."

Bruce Banner does mention in Infinity War that Vision could maybe still live without the Mind Stone, and there's a vague implication that Vision's consciousness was maybe downloaded before he died. None of that has been confirmed though, and it's unclear how long after Endgame WandaVision is taking place.

Does Vision being alive have anything to do with Wanda's powers?

Probably. The most popular WandaVision theory is that in her grief, Wanda used her manipulation powers to create a whole new fake reality where Vision is still alive. One trailer shows that Vision isn't even aware he died, and that it's Wanda who's magically redecorating the living room to keep up the act.

Does she have the power to do that?

Well the thing about never truly defining a character's powers is that you can easily say, "Now she does!" Within the MCU, Wanda has never had the power to vastly alter reality. But she does have that capability in the comics.

But why is WandaVision set in a sitcom?

Another big question! One possibility is that Wanda sees sitcoms as the perfect coping mechanism for losing the man she loves. Everyone seems happy in them, and problems are always solved by the end of an episode.

Still another theory is that Wanda isn't responsible for this sitcom reality at all, and someone — like HYDRA or even a well-meaning ally — has trapped Wanda to study her rapidly increasing (and possibly even more unstable) powers.

If this isn't real, who are all the other people in the neighborhood?

As one fan pointed out, they could potentially be government agents being brainwashed by Wanda. In the films, Samuel L. Jackson's character Nick Fury was the head of S.H.I.E.L.D., a secretive defense organization that protected Earth against otherworldly threats. That organization was destroyed in Captain America: Winter Soldier, but it's implied that Fury started a new group, S.W.O.R.D., to pick up the slack. It's heavily implied S.W.O.R.D. is at least monitoring Wanda's actions, but whether or not they're actually in control of this reality remains to be seen.

Is the WandaVision story in the comics?

Sort of. WandaVision is loosely inspired by the comics. The movie and comic book characters are very different, but per Vulture, the comic versions of Wanda and Vision did actually retire and live a happy domestic life for a time. However, Wanda's loved ones eventually died, and in the 2005 "House of M" storyline, she created a dangerous fake reality where they were alive again. This really put her at odds with the Avengers, and made her a controversial figure for fans.

Which People's Names Do I Need To Remember?

Aside from Wanda and Vision, there are a handful of important WandaVision characters to keep track of.

Teyonah Parris' character hesitantly introduces herself as Geraldine, but we already know that she's actually playing Monica Rambeau, the little girl from Captain Marvel, which was set in 1995. Considering she met Nick Fury when she was just a kid, there's a very good chance she's actually a S.W.O.R.D. agent working with him.

Interesting to note: in the comics, Monica is the superhero Spectrum, and the costume logo is seen in Episode 2. Either WandaVision is setting her up to be a hero, or she already is Spectrum and simply forgot.

Agnes is Wanda's next door neighbor who always seems to swan in at key moments. There's a running theory that she's actually Agatha Harkness, a witch from the comics who taught Wanda how to harness her chaotic magic.

Dottie is the neighborhood queen bee. She just seems like the resident mean girl who Wanda struggles to impress, but some fans are convinced she's the devil — or at least Marvel's version of it.

At the D23 2019 expo, Disney announced that Randall Park would be reprising his role as FBI agent Jimmy Woo, who first appeared in Ant-Man and the Wasp. He's a well-meaning agent who got bamboozled by Ant-Man a few times, and memorably, was open to going on a date with him. Given his history with superheroes, it's very possible Jimmy is also now working for S.W.O.R.D.

Dennings was also announced to reprise the role of Darcy at D23. Darcy appeared as an intern to scientist Jane Foster in the earlier Thor movies. Her history of studying spatial anomalies and wormholes with Jane is likely relevant to whatever is happening in WandaVision.

About those twin boys...

At the end of WandaVision's second episode, Wanda magically makes herself several months pregnant. This is an important detail, as the loss of her children was what caused Wanda to rewrite reality in the comics. Her sons are later organically reborn as real boys — don't ask — and go on to lead the Young Avengers. Two other Young Avengers have already been cast for the Hawkeye show and Doctor Strange 2 movie, so hey, maybe you were uninterested in the stuffy old Avengers, but now's the perfect time to dial in for the likely upcoming Zoomer team.

Also the X-Men are a thing

We'd be remiss if we didn't note that Disney now owns the rights to the X-Men, and Wanda was an X-Men in the comics. Is WandaVision where the X-Men finally get introduced into the MCU? Executive producer Kevin Feige has consistently claimed that's a long way off, but it's certainly one of many unexpected things that could happen in the mind-bending show.

More like this
Here’s Everything Coming To & Leaving Netflix In February
By Jake Viswanath
6 'Happy Valley' Easter Eggs You May Have Missed
By Sophie McEvoy
Claire Foy Spoke Out About 'The Crown's Gender Pay Gap
By Sam Ramsden
The Plane Crash In 'Dear Edward' Is Based On A 2010 Tragedy
By Grace Wehniainen
Get Even More From Bustle — Sign Up For The Newsletter
From hair trends to relationship advice, our daily newsletter has everything you need to sound like a person who’s on TikTok, even if you aren’t.