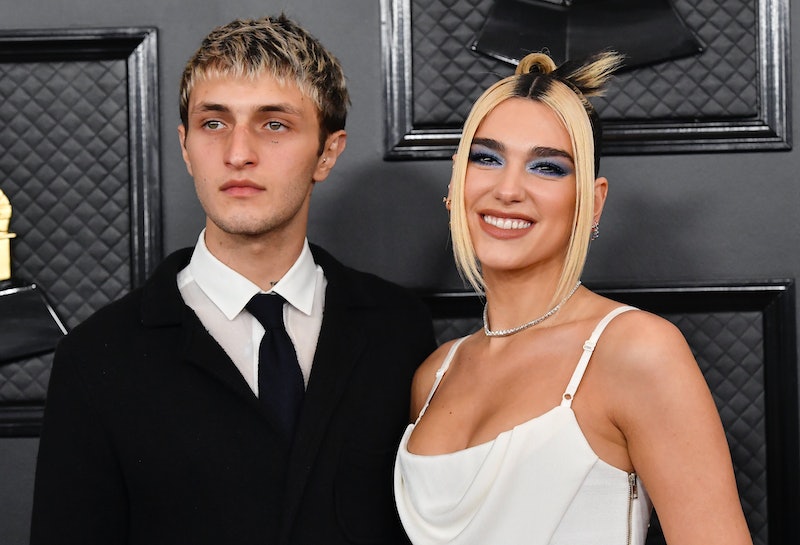 The COVID-19 pandemic was make-or-break for every couple around the world, and celebrities were no exception. Not only did Dua Lipa and Anwar Hadid stay together during quarantine, but they thrived under lockdown. The pair first connected in June 2019, reportedly through the model’s famous sister Gigi Hadid, who is good friends with the “Don’t Start Now” singer. By the next month, they were already spotted locking lips in London, and soon enough, they made their relationship official — by confirming it on Instagram.

Fast forward more than two years, and the couple continues to show off their love with each new chapter of their relationship, from their first public display of affection to them expanding their family with an adorable dog named Dexter. Now, they’ve celebrated many birthdays and holidays together, solidifying their status as one of young Hollywood’s cutest couples.

Ahead of the Sept. 12 MTV Video Music Awards, where the couple may make an appearance because Lipa is nominated in multiple VMA categories, revisit their relationship timeline below, from the first DM to the latest Instagram selfie.

Lipa and Hadid reportedly linked up in June 2019, not long after the singer broke up with her on-again, off-again boyfriend of five years, British model-chef Isaac Carew. According to TMZ, the pair first struck up a friendship when Hadid shared some of his own music with the pop star. After hearing about her breakup, the model reached out again. Per TMZ’s source, they “went out, had a good time, and liked each other enough to run it back.” And once The Sun published a video of Lipa clapping and laughing as Hadid held his birthday cake at his party, rumors of a relationship between the two started to swirl.

A month after the party, Lipa and Hadid were spotted kissing at the British Summer Time Festival in London’s Hyde Park. The couple continued to travel together, as they were seen hanging out in New York and Los Angeles in the days and weeks after their festival date. Despite their PDA, neither of them commented on the rumors.

On Aug. 4, both stars posted slideshows of them attending the Sunny Hill Festival, an event put on by Lipa’s family in Kosovo. The singer'‘s first photo was a snapshot of her and Hadid in the crowd, while Hadid’s slideshow showed Lipa with her arm around his shoulder. Not quite an Instagram official declaration of love, but it was pretty close.

During Lipa’s electrifying 2019 Europe Music Awards opening performance of “Don’t Start Now,” Hadid was cheering her on in the crowd. When she returned to her seat, he congratulated her with a kiss (on the cheek). There was still no official confirmation from the two at this point, but their actions spoke so much louder than any IG caption ever could.

Later that month, at the 2019 American Music Awards, Lipa and Hadid walked the red carpet together, where she finally verified what everyone had been thinking about their relationship. “My date is my boyfriend. He’s so handsome, right?” she told Entertainment Tonight.

In April, Lipa confirmed on the Lorraine show that she and Hadid were quarantining together during the coronavirus pandemic. “I got back from Australia, and when the self-isolation thing started to happen, I quickly had to find a spot,” she said. Her solution? A “random AirBnB” in London. While several other celeb couples didn't fare so well in quarantine, she and Hadid adapted well to living together unexpectedly. “My boyfriend and I are used to it. We travel a lot, so we can make anywhere home,” she said. “We're good at doing our own things and then coming together when we want to watch a movie or do a painting, and we go on our one hour daily walk.”

Although it was reported in 2019 that Hadid asked Lipa out on a date, the singer has a different story. During an appearance on Watch What Happens Live with Andy Cohen, the host asked the pop star if she ever DM’d a celebrity on Instagram. Surprisingly, she revealed that she actually made the first move on Hadid. “I have a confession to make,” she said. “Mine was my boyfriend, my current boyfriend. I definitely did that. We met at a BBQ, but then it carried on into the DMs.”

The couple marked their first anniversary on June 14, 2020, which means those initial dating rumors were true. To mark the occasion, Lipa posted a slideshow of sentimental photos from their first year together. “Nothing sweeter than 365 days joint at the hip with you,” she wrote, adding a red heart emoji for good measure.

After 14 months of dating, the duo took another important step in their relationship and achieved a major quarantine milestone. They didn’t get engaged, but they did adopt a puppy, which is just as monumental. On July 31, Lipa revealed the newest member of their crew, sharing many adorable snapshots as any new dog mom would. “Our tiny best friend Dexter,” she announced.

Lipa and Hadid reached an inevitable point in any relationship that includes a famous musician: the music video cameo. Hadid appeared in Lipa’s music video for “Levitating (The Blessed Madonna Remix),” her major collaboration with Madonna and Missy Elliott. The couple is together at the end of the video, lying on the grass and gazing at the sky.

Although quarantine restrictions kept them from celebrating Christmas like usual, Lipa and Hadid still made the best out of it, and showed off their holiday festivities on Instagram. As evidenced by Lipa’s Instagram post, the couple shared gifts, made Mario-themed gingerbread houses, and spent time with Hadid’s famous family, including sisters Gigi and Bella.

Lipa and Hadid make an adorable couple, but the true star of their relationship is Dexter, their black lab puppy who celebrated his golden birthday on May 1, 2021. “Dexter is 1 today,” Lipa on Instagram wrote to mark the occasion, sharing a slideshow of his cutest moments. “smallest guard dog in the [world]. our tiniest companion!! Like 3 peaaaaz in a pod @anwarspc.” The singer also thanked animal rescue organization Labelle Foundation for “helping us find the most perfect lil guy!!!!”

Nearly a year after appearing in Lipa’s music video (a curse for some stars), the couple proved they were still going strong when she celebrated Hadid’s 22nd birthday on Instagram. “Another lap around the sun ~ you make my world so much better!!” she wrote. “I’m lucky to love you and be loved by you. DEXTER IS SO LUCKY TOO N LOVES U SO MUCH!!! can’t wait to celebrate youuuu today.” The musician also posted a slideshow from Hadid’s birthday party, which was attended by stars like Charli XCX, Jaden Smith, and Tove Lo.

After spending her previous birthday in quarantine, Lipa made the most of her 26th birthday celebration, as evidenced by her Instagram slideshow posted on Aug. 23. “Going into my 26th year feeeeelin very 𝓁𝑜𝓋𝑒𝒹,” she wrote. “Thank you for all the birthday wishes!!” She began and ended the slideshow with sweet photos of her and Hadid, making it clear that they were still just in love as ever.

After two years, Lipdid (is there a more flattering couple name?) is proving to be one of young Hollywood’s most steady power couples.

This article was originally published on November 22, 2020