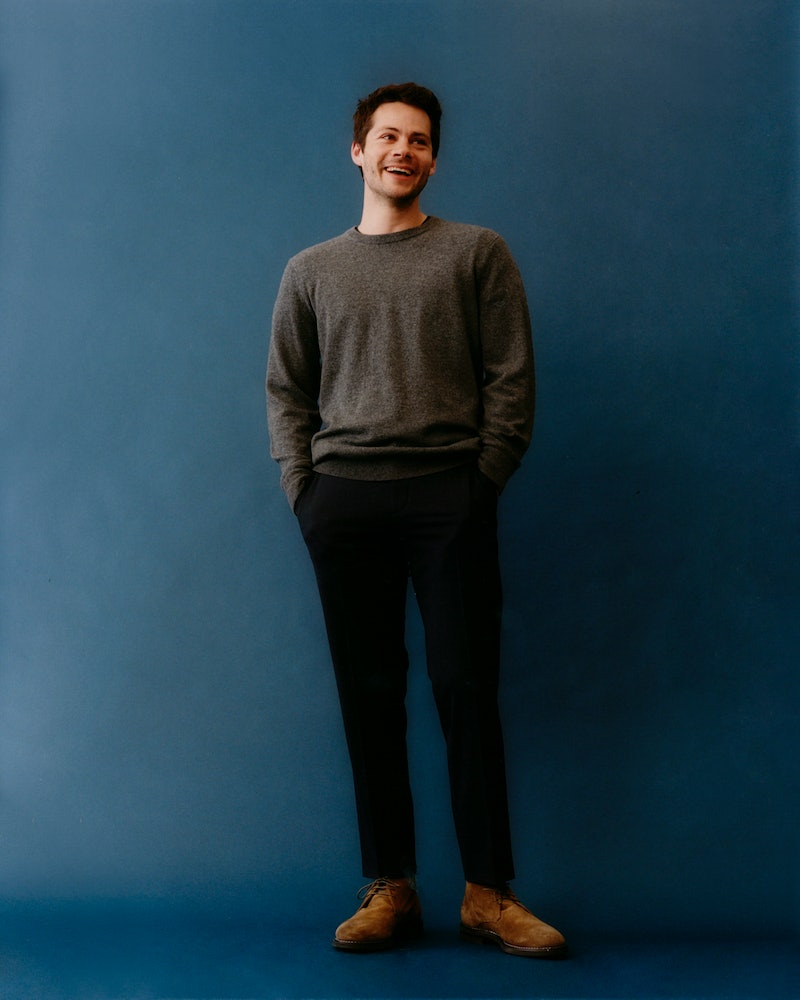 Minutes into meeting Dylan O’Brien, he lets me in on a secret: Growing up, he was a massive American Idol fan. We’re outside his Bustle photo shoot where he’s bumping Remi Wolf, the soul-pop artist who briefly appeared as a contestant on the show’s 13th season. But O’Brien notes he also rides for the series’ OGs like Fantasia Barrino and Jennifer Hudson. “I'm obsessed with people,” O’Brien says of his enthusiasm for reality TV. “How are you not obsessed with people?”

The revelation is peak O’Brien — a little embarrassing, totally earnest, and altogether endearing —and the rest of the 30-year-old’s time on set is littered with more of these interactions. When an intern sneezes, he compliments her on how “cute” it sounds. After introducing himself to the production coordinator, he marvels that she shares a name with his sister Julia. Once the aforementioned intern lets it slip that he was her childhood crush, he thanks her and compliments her Balenciaga trainers. Disarmament is the former Teen Wolf star’s superpower. But at what cost?

“I really care about making people feel comfortable, sometimes to a fault,” he admits when we decamp to a hotel bar nearby. Once we’re seated, a fan approaches him to record a message for a friend back in Colombia. Naturally, O’Brien obliges. “I think it’s something that I owe myself to embrace, because it's a good quality, for the most part,” he says. “It’s very important to me that the entire team on every job just feels [good]. I always say I’m not really an actor, but what I bring to the table is a good time.”

His friends and collaborators agree. When co-star Zoey Deutch found herself living in the same London apartment block as O’Brien while filming their new movie, The Outfit, the pandemic was still raging. Days on set were heavy, with O’Brien playing the heir apparent to a vicious cadre of gangsters who operate out of the shop of a Chicago tailor, played by Oscar-winner Mark Rylance. When the pair got home, they would bliss out by watching more reality TV. “He just loves sh*tty TV so much,” Deutch says. For much of the trip, O’Brien was in the throes of rewatching Vanderpump Rules — he calls the show “my Godfather,” when I ask him about it later — while Deutch was “deeply involved” with Love Island U.K., of which O’Brien is also a fan. “It’s such a great quality of his, and so out of character because he’s so smart, intellectual, and interesting,” Deutch adds. Though for the record, the ever-earnest O’Brien thinks the idea that reality TV isn’t intelligent is “insane.”

Being a preternaturally affable, good-vibes-only kind of guy was a survival skill O’Brien picked up as an adolescent, when his family moved from New Jersey to California when he was 12. “[It was] the worst thing to happen to me as a kid,” O’Brien recalls of trying to make friends in a new middle school. He found a salve in YouTube, sharing 14 videos between 2007 and 2009. (His account, moviekidd826, is still live, and it features comedy skits and videos of O’Brien lip-syncing to the Spice Girls’ “Wannabe.”) He signed with manager Liz York, whom he still works with today, off the videos alone, and in 2010, he landed the role of Stiles Stilinski on MTV’s series Teen Wolf. Overnight fame followed. “All of a sudden girls were coming up to me in places, wanting to take pictures,” he says. “It was very scary.”

Teen Wolf ran for six seasons from 2011 to 2017. O’Brien picked up four Teen Choice Awards, along with three MTV Movie Awards for his work in the Maze Runner trilogy, all of which seeded a very specific kind of fame: internet boyfriend. In 2022, Twitter has a short attention span — it’s in a flurry over Lee Pace one week, and Euphoria’s Angus Cloud the next — but O’Brien’s spot in the pantheon is eternal. He frequently goes viral among his 6 million Twitter followers for his “right side of history” tweets criticizing Ted Cruz, J.K. Rowling, and Donald Trump Jr, with his pithy burns earning responses like “We love a woke king who only tweets to drag people and call them out on their bullsh*t” and “Dylan O'Brien's Twitter is the reason why he's my white boi of the month.”

When I ask him about this adoration, his demeanor shifts. “It’s so funny, my palms are sweating. It’s overwhelming [and] it’s wonderful,” O’Brien says, tearing up. “It’s just gnarly to think about little me having this really special thing happen.”

For a long time, O’Brien rode the wave of this success without pause. When not filming Teen Wolf or Maze Runner, he supplemented his filmography with projects that would help transition him to a bonafide box office star: He went full romantic leading man in The First Time, and showed off his comedic chops alongside Owen Wilson and Vince Vaughn in The Internship. But Operation Make Dylan O’Brien a Star came to a screeching halt in 2016 when he sustained a concussion, a facial fracture, and brain trauma after being struck by a vehicle while filming a stunt for the final Maze Runner movie in Vancouver. Production shut down, with the plan that filming would resume two months later. It took six.

“I was really struggling,” he says of the months of physical and spiritual healing that followed. “I never stopped working until that accident. It’s a really strange thing to have so much of my identity be my career and then have this thing happen to me where I was convinced that I couldn’t do it anymore. I was just like, ‘I can’t ever imagine being on another set.’”

O’Brien ultimately finished the film but spent much of the next five years out of the spotlight focusing on a more personal pursuit: “I was reintroducing myself to myself.”

Now, O’Brien is ready to reintroduce himself to his fans, too. During the pandemic, he made headlines for his performances in a spate of unexpected projects. He played a fictionalized version of himself on Curb Your Enthusiasm and reenacted a scene from The Social Network as part of actor Sarah Ramos’ viral Quarantscenes series. “We had been trying to figure out what [scene] to do,” says Ramos, who met O’Brien when they were set up on a friend date by The Handmaid’s Tale’s Max Minghella. “We briefly mentioned The Social Network, and he did his impression [of Andrew Garfield’s Eduardo] and I was like, ‘OK, we are obviously doing that because you were so good.’” Garfield himself has since said O’Brien “murdered it,” and though O’Brien jokes that the roles that required the least work have garnered him the most buzz, Ramos can see why. “I think [Hollywood] has looked at him quantitatively rather than qualitatively,” she says. “He’s kind of misunderstood and underestimated, but he’s so talented.”

This talent caught the eye of another high-profile fan, Taylor Swift, who was re-releasing her first five records after her masters were sold to Scooter Braun in 2019. For Red (Taylor’s Version), she had decided to write and direct a short film to accompany a 10-minute version of what is arguably her most heartbreaking ballad in a discography chock-full of heartbreakers: “All Too Well.” Though she and O’Brien had never met, Swift believed that he was the only actor who could imbue the music video’s de facto villain with the necessary pathos.

“Dylan was my first choice for the ‘All Too Well’ short film because he has that versatility I was looking for,” Swift writes over email. “I’d seen his work and heard nothing but wonderful things about him as a person. Ultimately I want to work with people who love what they do and come at it with enthusiasm, because that’s how I approach creating things too.” Swift sent O’Brien a novella-length text message asking him to do it — he spends over five minutes scrolling through their text thread to show it to me; there are a lot of messages in its wake — and O’Brien agreed without hesitation. “I had a feeling he would be great at ad libbing and adding nuance to his character, which enriched the story tenfold,” Swift writes. “He absolutely blew me away and I feel really lucky that I gained such a great friend from the experience too.”

For O’Brien, the most surprising part of the experience of working with Swift was the canonical perfectionist’s ability to cede control. “For someone who’s that meticulous, she’s so trusting. Sometimes we’d do one take, which was so the opposite of neurotic,” he says of the shoot, which took place over two days in New York. Swift also allowed O’Brien and co-star Sadie Sink to contribute to the creative process, which led to one of the film’s most wrenching moments, when the music stops and the two fight after a fraught dinner party. “Everything was planned to be to music. But then when we played out that scene [with dialogue]. [Taylor] immediately marched over and was just like, ‘This is it. I’m going to play this in the video.’ The confidence to just identify that in the moment on set and take in what we were bringing to it [shows how] she’s so sound with relationships and her instincts.”

Like Swift, O’Brien has been working since he was a teenager, and after a decade of hard work, he’s learning to trust his own instincts and push for what he wants. He calls his role in The Outfit “the kind of [part] that I never get,” though all of his upcoming films see him leaning into the meatier, feature-length roles he’s longed for since his Teen Wolf days. He currently has three projects in post-production: A political comedy written by Ike Barinholtz; a murder mystery produced by M. Night Shyamalan; and Not Okay, a sordid, scheming tale of an influencer who fakes a trip to Paris to gain followers. The latter will see him star opposite Deutch yet again, this time as a bleached blond and tatted up hype-beast bae. It’s a departure for O’Brien, who cites Simon Rex in Red Rocket as his dream role, but isn’t that the point?

“I’ve always felt I was a character actor at heart,” he says, suddenly not so self-effacing. “So it’s fun to [do it] for the first time in my career.”