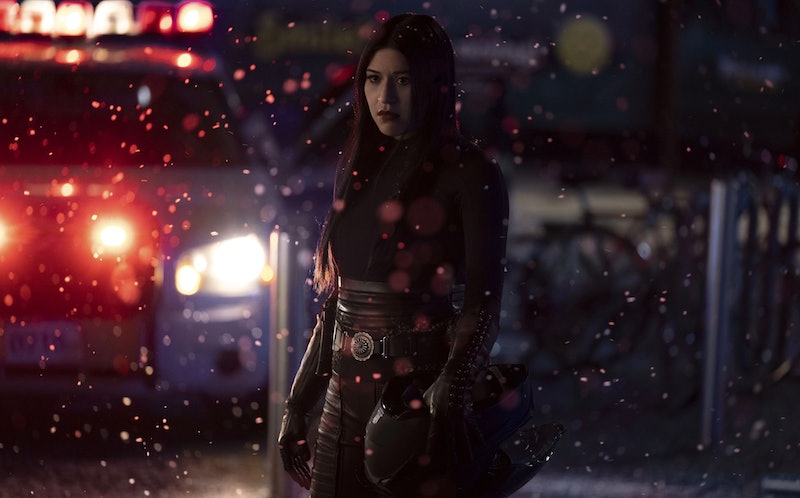 Though Hawkeye’s six-episode run ended relatively happily for Clint and Kate, one character’s holiday looked to be a little gloomier. Fresh off fatal confrontations with Kazi and (apparently) Kingpin, Maya Lopez is all alone. Granted her found family was pretty horrible and caused the death of her dad, but that has to be rough. Fortunately, this won’t be the last viewers see of the powerful fighter. The new Echo series on Disney+ will follow up on Maya and, likely give her a chance to explore her identity now that she’s no longer on Wilson Fisk’s payroll.

Though specifics on the Echo Disney+ series are sparse, the streamer seems to have big plans for the new entry. For starters, the show was announced during Disney+ Day on November 12 — before Hawkeye even premiered, so the green light is based on something bigger than fan reaction alone (not that there wasn’t plenty of that). And given the character’s connections to other Marvel mainstays, of which Kingpin was just the beginning, the series could tie into the greater Marvel Cinematic Universe in a fun way.

Here is everything you should know about the Echo series, cast, and plot, so far.

On July 7, The Hollywood Reporter announced that Charlie Cox will be joining the cast of the show, alongside Vincent D’Onofrio, reprising their roles as Daredevil and The Kingpin, respectively. Both Cox and D’Onofrio have made recent cameos in the MCU, including Spiderman: No Way Home for Cox and Hawkeye for D’Onofrio.

The announcement goes on to say that Cox’s character will be seeking out an ally as a subplot on Echo, who is speculated to be Krysten Ritter’s Jessica Jones, the titular character from the Marvel show that ended in 2019. Ritter’s reprisal of Jones is still unconfirmed, but given Marvel Studios’ intention to further incorporate on-the-outskirts Netflix faves into the main MCU lore, her appearance wouldn’t be unexpected.

While there’s not a specific Echo release date just yet, we do have a release window. On May 17, Marvel announced that Echo will arrive on Disney+ in 2023, and filming is underway now.

Wondering what to expect from Echo? For starters, there seems to be a change of scenery ahead. According to the official Marvel synopsis:

The origin story of Echo revisits Maya Lopez, whose ruthless behavior in New York City catches up with her in her hometown. She must face her past, reconnect with her Native American roots and embrace the meaning of family and community if she ever hopes to move forward.

The comics provide plenty of possible storylines which could come into play at some point in Echo’s story. Maya has a relationship with Matt Murdock before she finds out he’s Daredevil — the vigilante she believes is responsible for killing her dad. Just like in Hawkeye, she re-aims her anger at Fisk once she realizes his role in the murder.

Speaking of which, Fisk is probably still alive. In Daredevil No. 15, Maya shoots her shady “uncle” in the face, but he’s later shown to have survived the confrontation (he’s good at that). Later on, Maya works with the Avengers, Moon Knight, and more, so there’s definitely room for more team-ups in Echo.

This post will be updated with the trailer, release date, and additional plot details as more information on Echo becomes available.

More like this
Netflix Shut Down 'Bridgerton' S3 Rumours About A “Very Dark” Storyline
By Bustle
'The Queen’s Gambit' Season 2 Tweet Wasn’t From Anya Taylor-Joy
By Mary Kate McGrath, Jack Irvin and Grace Wehniainen
Kukulkan From 'Wakanda Forever' Has A Surprising Connection To Marvel History
By Grace Wehniainen
Everything To Know About The 'Daisy Jones & The Six' TV Series
By Maxine Harrison and Brad Witter
Get Even More From Bustle — Sign Up For The Newsletter
From hair trends to relationship advice, our daily newsletter has everything you need to sound like a person who’s on TikTok, even if you aren’t.

This article was originally published on Dec. 23, 2021