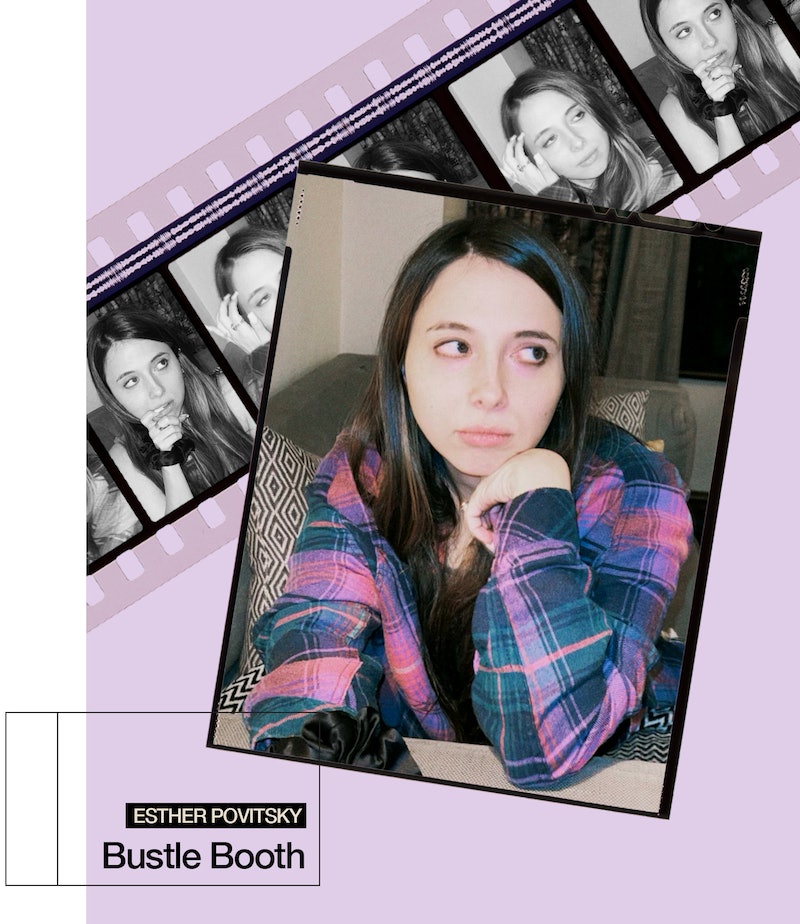 Esther Povitsky was locked out of her car and sitting on the sidewalk at a gas station in 2018 when she received some bad but not entirely unexpected news. Alone Together, the show about a codependent friendship that she created, wrote, and starred in, had been canceled after two seasons on Freeform. “I just remember sitting there being like, ‘OK. This is OK. It's OK that this is happening,’” the 33-year-old tells Bustle.

It turns out, it was. Shortly after hanging up, she had a new script to review, and this one seemed like an actually interesting opportunity. “I sound like a bitch, but most comedies are bad — we all know that,” the actor and stand-up comedian says. But this script, for the Hulu series Dollface, felt like a new take on the genre. “[I got] so high off of reading a script written by a young woman that felt like a real person was speaking and being funny.”

As soon as Povitsky auditioned for Dollface, a comedy about four women navigating adult friendship, creator Jordan Weiss got to work writing a role just for her. Enter: Izzy, the insecure and self-sabotaging coworker to Kat Dennings’ Jules. After a season of wiggling her way into Jules’ friend group and desperately trying to fit in at work, Izzy is now a solid member of the crew. In Season 2, out Feb. 11, Izzy also navigates a serious relationship and doles out unsolicited advice — some of it improvised, like when Povitsky slipped in a line about the not-so-PG wonders of an electric toothbrush.

When she’s not enjoying the “sleepover” atmosphere of the Dollface set with co-stars Dennings, Brenda Song, and Shay Mitchell, Povitsky is taking her stand-up comedy act on tour, a dream she’s pursued since dropping out of college and moving to LA. Like Izzy, Povitsky has very little regard for what’s deemed appropriate when she’s onstage, joking about everything from not bathing to a revealing bit about having a miscarriage. She admits the latter is something she hasn’t told many people in her life about; she’s more comfortable sharing personal stories from the comfort of the stage. “I got like four DMs from women being like, ‘Oh my God, I also had a miscarriage. And it was really therapeutic to hear you laugh about it,’” Povitsky says.

The positive response to Povitsky’s comedy, which often “makes light of our traumatic experiences,” fuels her; it’s helped her comedy progress to a place where she can say her own truths onstage. That doesn’t mean she’s leaving the silliness on the cutting room floor, however. "Imagine if you could have Lady Gaga's baby," she begins, using me as her audience to workshop a new bit about buying celebrities’ eggs. Her delivery is so convincing that for a moment the joke sounds like a legitimate business pitch.

Below, Povitsky puts the Lady Gaga egg conversation on ice and steps into the Bustle Booth.

It’s an iced, shaken espresso with no sweetener with blonde espresso, with oat milk, but basically an iced oat milk latte.

Obviously Chicago, obviously New York, obviously Skokie, Illinois, where I’m from. And then for some reason, I have Santa Monica, I guess, on the hot days, to be jealous and see how much cooler it is there because they’re by the ocean. Palm Springs, Vegas, Honolulu, and Santa Clarita because that’s where we shot our Season 2.

Pisces. The least Pisces thing about me is that I can’t swim, and it’s a fish.

“This was no boating accident” from Jaws.

I mean, it’s obviously Euphoria. Come on. I love Sydney Sweeney’s character. Maddy and Cassie, I love them both.

Dancing with the Stars.

So many things. The Kanye West / Julia Fox spectacle. So unlikable, though. So I don’t know how to feel about it, but I’m strangely intrigued.

She really did fix her breath problem in the end. She figured out how to get rid of it. She cured halitosis.