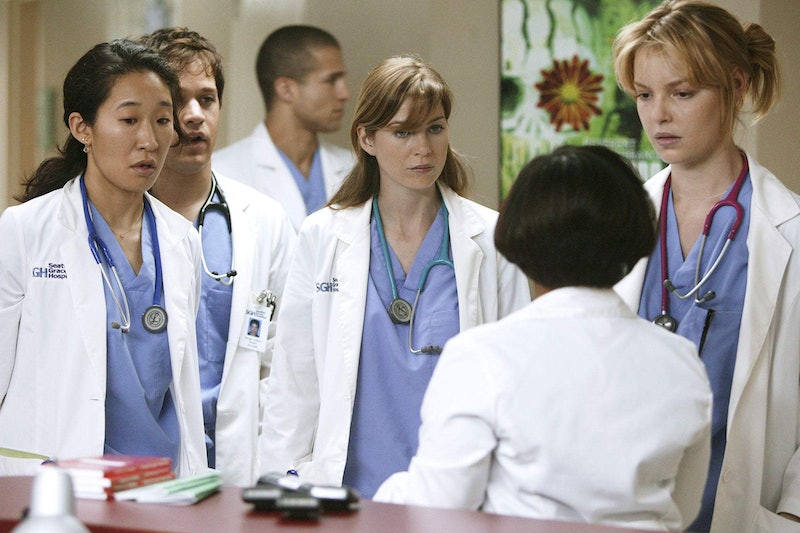 Somehow, 17 years have passed since Grey’s Anatomy aired its very first episode — and the drama hasn’t stopped. Many shows have their pilot and get their footing during the first (or even second) season, but Grey's Anatomy hit the ground running and didn’t look back. It really shows what an amazing showrunner and creator Shonda Rhimes is — her voice is just that strong — and makes the medical drama one of the most rewatchable series out there. If you’re on your fifth rewatch of the entire show and head back to the beginning every single time, you’re not alone.

So much has changed on Grey’s since that very first episode, including the fact that almost everyone we meet is now dead, working somewhere else, or inexplicably raising twins together in Kansas. As Izzie might say, seriously?! Not to mention the hospital has a whole different name, too. But at the same time, the Grey’s Anatomy pilot introduces elements of the series that would go on to be major hallmarks of the show — clues and casual props that feel way more significant knowing what we know now.

Here are some of the most interesting things you’ll notice rewatching the Grey’s pilot in 2022.

The Grey’s Anatomy soundtrack is almost a cliché at this point — like, the show has cornered the market on alt-pop. And sure enough, the very first episode introduces several mid-aughts bangers. The first song played in the episode is “Portions For Foxes” by Rilo Kiley. Also in the episode is “They” by Jem — a song played in practically every show in the 2005/2006 season — and “Life Is Short” by Butterfly Boucher.

Thirteen Senses’ “Into the Fire” also plays and would go on to become a sad staple on the show. In the pilot, we hear it during Meredith and Derek’s first surgery together — but 10 years later, it plays when Derek is hospitalized with his fatal brain injury (via a cover by Erin McCarley, because Grey’s loves a good rendition). Ouch.

Even The Episode’s Title Is Significant

Grey’s was a game-changer from the start, in more ways than one. Take, for example, the name of the episode: “A Hard Day’s Night,” borrowed from the Beatles song of the same name. Not only does the title perfectly fit the premise of the episode, but it also began the Grey’s tradition of naming virtually every episode after a song. (Generally, network shows tend to start with Episode 1 being named “Pilot,” a convention Rhimes followed in How to Get Away with Murder and For the People. But not Grey’s!)

OK, maybe you can’t call this an Easter egg because it probably wasn’t intentional. But in Meredith and Derek’s very first scene (refresher: they just woke up at her house after having spent the night together), Post-it notes — including the blue kind! — can be seen all over Meredith’s walls. Five seasons later, the couple would write their marriage vows on a spare Post-it at the hospital.

Izzie rocks a pair of glasses in the first episode of Grey’s. In fact, even when she’s not wearing them, they’re on her head and ready for action. The spectacles don’t reappear all that often in later seasons — and that might be because they were a leftover idea from Katherine Heigl’s audition. “I loved the idea that I could go in and play something that was so against the type that I generally get cast as,” Heigl said at The Paley Center for Media in 2006. “I put my glasses on, put my hair back, and I didn’t wear any makeup. And I put a sweatshirt on and tried to be all, ‘I’m really smart. I can be a surgeon.’ And they totally bought it.”

Sadly, this is the episode where George earns his nickname 007 — but the patient he loses on the table is not the only major mishap in Episode 1. He also promised another patient’s wife that her husband would be OK (he wasn’t). When that latter patient jokes that George should “kill me now” since he’ll need to switch to a strict, heart-healthy diet after bypass surgery, George says, “I wish I could, but I’m a healer.” Oof.

It’s a known fact that Alex Karev wasn’t originally a character on Grey’s, but the writers added him to have a male foil to George’s character. Once you know this, you can’t unsee it in the pilot. Justin Chambers was added digitally to the pilot after it was shot, and it’s so obvious — he sort of just appears. For all his faults (and very questionable decisions down the line), without him, there’d be no MAGIC (Meredith, Alex, George, Izzie, and Cristina) and just, well, MGIC. Who knew he’d go on to become such an essential character in Mer’s life?

There Are A Ton Of Random Doctors

Of course, there’s bound to be other doctors in the hospital besides the core surgeons, but early on, there seems to be a lot of extras in the pilot. The locker room was filled with a swarm of interns, but now, it’s notable if there are four people in there at one time. During the lunch scene in which Cristina tells everyone that Meredith is Ellis Grey’s daughter, there are just three random doctor dudes sitting with them. Who are they? Where did they go? Did they fall out of the program?

The Guest Star Is A Real Bratz

The medical case of the episode is Katie Bryce, a pageant queen who turns out to have a burst aneurysm. She is played by actress Skyler Shaye, who starred in 2007’s Bratz . Yes, it’s a movie based on the line of dolls.

Derek Has A Soft Side

Derek is obviously McDreamy from the start — but the first episode includes a reminder of why we love him so much, and it’s not just about looks or charm (though there’s plenty of both). He takes the time to shave Katie’s head before surgery and “promised [he’d] make her look cool.” Not a doctor here, but pre-op hair removal seems to be something a nurse would do (WebMD suggests as much), so it’s sweet that Derek is doing it even if it’s not on his official list of neurosurgeon duties.

His Scrub Cap Is Different, Too

Another adorable Derek detail? His scrub cap: it’s not the ferry boats we’ve come to associate him with, but instead a fish print. We later learn that fishing is actually an important, cathartic part of Derek’s life in Seattle, so he’s embracing the Pacific Northwest vibes early on.

Cristina And Meredith Were Instant Friends

Though there’s a bump in the road (the whole “I slept with Derek and got a surgery and you’re mad” thing) in the first episode, Cristina and Meredith are already best pals. There’s no gratuitous woman-against-woman competition in Rhimes’ world, just camaraderie. Not that there’s no room for conflict — there certainly is, just like real life — but it’s so much deeper than the typical portrayal of women’s relationships.

This article was originally published on April 9, 2015