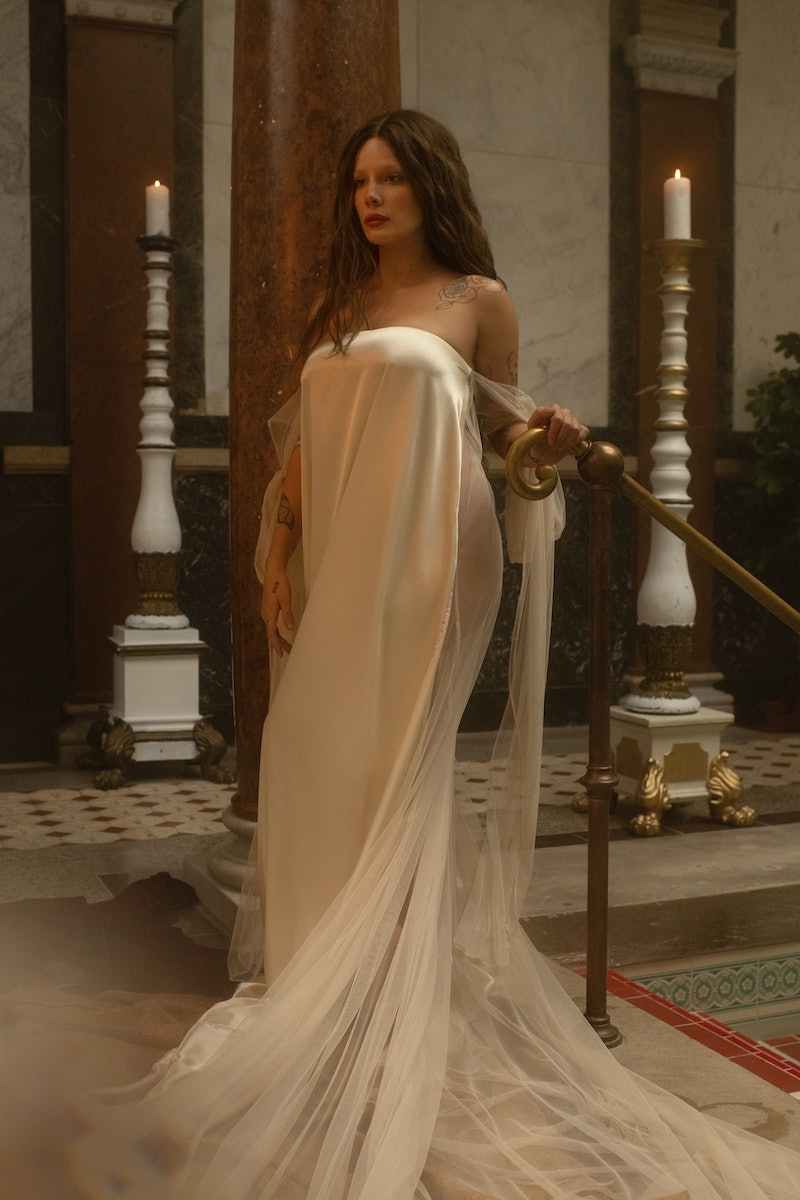 Halsey released her third album Manic in early 2020, and due to the COVID-19 pandemic, she wasn’t able to embark on its intended world tour. Over the past year, the musician has made headlines for her social justice activism, makeup line About-Face, new relationship with screenwriter Alev Aydin, and pregnancy, which she announced in January 2021. Considering she’s been so busy with life outside of her art, fans weren’t expecting new music from Halsey anytime soon — but it turns out she’ll be delivering more than a baby this year. After announcing its title in late June, she revealed on July 7 that her new album, If I Can’t Have Love, I Want Power, is set for release on Aug. 27.

Along with the announcement of its release date, Halsey also revealed the album’s cover artwork: a photo of her in a gown, sitting on a throne with her breast exposed and a baby on her lap. She unveiled the image in a 13-minute video posted to her YouTube channel that features her walking around New York City’s Metropolitan Museum of Art, admiring other pieces of art referencing motherhood and breastfeeding. “This album is a concept album about the joys and horrors of pregnancy and childbirth,” she captioned the album art on Instagram, noting that it was “very important” for the artwork to reflect the “sentiment” of her pregnancy journey, aka “the dichotomy of the Madonna and the Whore,” she continued. “The idea that me as a sexual being and my body as a vessel and gift to my child are two concepts that can co-exist peacefully and powerfully.”

“My body has belonged to the world in many different ways the past few years, and this image is my means of reclaiming my autonomy and establishing my pride and strength as a life force for my human being,” she wrote. “This cover image celebrates pregnant and postpartum bodies as something beautiful, to be admired. We have a long way to go with eradicating the social stigma around bodies & breastfeeding. I hope this can be a step in the right direction!”

While Halsey hasn’t yet released a track from the forthcoming album, she revealed via a Los Angeles billboard in late June that If I Can’t Have Love, I Want Power is produced by Nine Inch Nails’ Trent Reznor and Atticus Ross, signifying a punk-rock move for the pop star. However, it’s not her first foray into the genre — 2019 singles “Nightmare” and “Experiment On Me” showed off her hardcore chops, and 2015’s “New Americana” literally informed listeners that she was “raised on” Nirvana’s music.

Immediately following the If I Can’t Have Love, I Want Power announcement and album cover reveal, fans got Halsey’s name trending on Twitter. Their reactions included sheer excitement, comparisons to other iconic pieces of art, and surprise towards the fact that she’s releasing an album at such a busy time in her life. However, there’s still one question left unanswered — according to the announcement video and recent Instagram posts, Halsey is still pregnant. So, whose baby is she holding?

Below, check out fans’ social media reactions to Halsey’s new album, If I Can’t Have Love, I Want Power.

More like this
Twitter Is In Awe Of Taylor Swift’s “Lavender Haze” Music Video
By Jake Viswanath
Twitter Is Saying The Same Thing About Beyoncé's Renaissance World Tour
By Shahed Ezaydi
Twitter Is Roasting Liam Hemsworth Thanks To Miley Cyrus' New Song “Flowers”
By Jake Viswanath
Beyoncé Just Announced Tour Dates: Here's How To Cuff Tickets To Her 2023 Shows
By Jake Viswanath
Get Even More From Bustle — Sign Up For The Newsletter
From hair trends to relationship advice, our daily newsletter has everything you need to sound like a person who’s on TikTok, even if you aren’t.