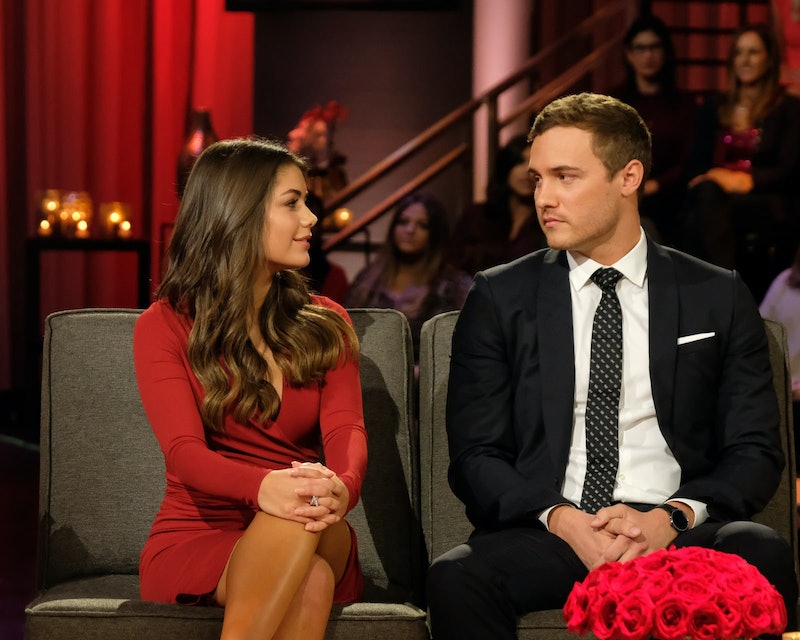 It's been a year since Peter Weber got engaged — and ended that engagement — on the finale of his season of The Bachelor, but his ex appears to be happier than ever on her own. During a Q&A session with her Instagram followers, Haley Sluss stated that her big sister Hannah Ann is "better off" after ending her engagement to Peter Weber on The Bachelor.

The sisters are currently enjoying a tropical vacation, and according to Us Weekly, Haley answered true and false questions on her Instagram story on Jan. 23. When a followers suggested that Hannah Ann is "better off without her ex-fiancé," Haley responded "TRUE," along with a snapshot of her sister sunbathing in a red bikini. While Hannah Ann has not commented on her sister's post, the model has not been shy about sharing her thoughts on the former Bachelor.

"He speaks half-truths," Hannah Ann said during an episode of Bachelor Happy Hour in March, shortly after their dramatic breakup aired on TV, before revealing that Peter blindsided her with his lingering feelings for Hannah Brown. "He told me that he needed to talk to Hannah Brown because he needed closure and was trying to convince me that I should feel comfortable with that ... Why we broke up makes a whole lot more sense, because he couldn’t really own up to the fact of how he was truly feeling."

A month later, Hannah Ann compared her ex-fiancé to "cauliflower" during an appearance on Kaitlyn Bristowe's Off the Vine podcast. "The vegetable that most represents Peter's manhood would be cauliflower because it has no taste," she said. "Cauliflower needs a lot of flavor. It needs a lot because it's just bland. There's no taste."

But while she may have the perfect man in mind, the model has admitted that it's been harder than she expected to find someone who meets all of her criteria. After revealing on the Click Bait podcast that she has started dating again, Hannah Ann revealed that the few dates she's been on post-Bachelor have been a "disaster."

"I feel like I’m an easy person to have a conversation with, but I feel like I just like the guys that are really hot that have no personality," she said. "And then I’m just sitting there just, like, talking to myself."

Hannah Ann isn't the only one who has moved on in the year since The Bachelor; Peter began dating another former contestant, Kelley Flanagan, after filming ended. The couple were planning to move to New York City together, but ultimately called it quits in late December. "Kelley and I operate on two different frequencies, and one isn't better or worse than the other," Peter told Entertainment Tonight following the split. "We're just two different people, and those differences surfaced after eight months of dating. But I loved her like crazy."

More like this
Hannah Ann Got Engaged 3 Years After 'The Bachelor' & The Proposal Was Dreamy
By Grace Wehniainen
'Bachelorette' Vet Clare Crawley Unveiled 2 Special Wedding Day Accessories
By Stephanie Topacio Long
Zach Reveals The Chaotic 30 Minutes That Were Cut From ‘The Bachelor’ Premiere
By Grace Wehniainen
Kylie Jenner Clarified How To Pronounce Her Son's New Name
By Jake Viswanath
Get Even More From Bustle — Sign Up For The Newsletter
From hair trends to relationship advice, our daily newsletter has everything you need to sound like a person who’s on TikTok, even if you aren’t.