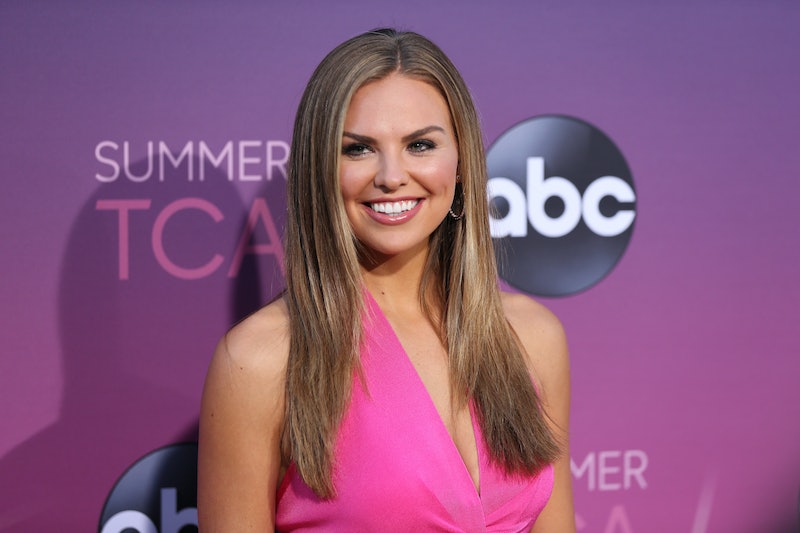 The confidence of "Alabama Hannah" on The Bachelor may have earned her legions of fans, but offscreen, the former pageant queen was struggling with learning to love and care for her body. In a new video for her YouTube channel, Hannah Brown opened up about her experiences with extreme diets and body image issues, revealing that she "only ate candy" when she was competing on The Bachelor. "Growing up in the culture that we do, I definitely struggle with [body image] as well," Hannah said, before revealing she compared herself to others when she was young.

"I always noticed that the other girls had skinnier legs than I did," she recalled, revealing that her "logger legs" made her insecure, especially once she started dance classes. "I would always compare myself to the thinner little girls; to notice and to fix and to pamper all the time, it's really easy to get into patterns. I was also in dance really young, so I was in front of a mirror. ... You're standing there with 20-something girls and you start looking at [them]."

As she got older and "thigh gaps" began to become desirable, she struggled with insecurities about her legs and her curvy figure. "I always hated my legs," the former Bachelorette said. "I wanted to be perfect. I was always self-conscious that I wasn’t as thin as I wanted to be." Then when Hannah started competing in pageants as a teenager, she began dieting, which "started years of [restricting]."

"I lost like 15 pounds in a month. I had abs for the first time," Hannah said of her first extreme diet, as she prepared for her first swimsuit competition. Afterward, "all the weight came back on and more," she recalled. "And that began the constant yo-yo that I had for so long." In addition to the stressful cycle of restricting and not-restricting her food, Hannah was also being told that she needed to change her appearance by people in the pageant and modeling worlds. "I had a lot of anxiety and a lot of depression because when you're told you have to be this certain way and you're not ... it really gets to you."

Once she entered the Miss Alabama pageant after a bad breakup, Hannah said she got "really small" — which she now recognized was the result of disordered eating. "I would truly forget to eat. I was sad. I was not eating enough. I remember winning and there were so many emotions with that," she recalled, adding that she was also trying to work out with the same intensity as before despite having less energy. Things didn't get any easier for her when she was cast on The Bachelor in 2018, as being "around all these beautiful women" made her insecure. "I only ate candy [on the show]. I wouldn't actually eat the food," she said.

While Hannah gained some weight back on The Bachelorette — because her extreme diets were "not sustainable" anymore — her public split from Jed Wyatt took a toll on her physically and mentally. "I had another public breakup, [and] I lost it all again," Hannah said, before revealing competing on Dancing With the Stars helped her learn to appreciate her body. "[I realized] I've been living such an unhealthy lifestyle, not taking care of myself." And though still has moments of insecurity, Hannah has now come to the realization that she and her body "needed to rest" in order to be at peace with herself.

"I didn’t have any self-worth through all that," Hannah said. "I have definitely struggled with accepting the way my body is now. ... I needed to dig deep emotionally in who I want to be." And she hopes that by sharing her story, she can inspire other girls to embrace and take care of their bodies, rather than comparing themselves to others. "[I'm] trying to be a more, authentic, real version of myself — and not the 'authentic, real' version of myself that someone else decided [I should be]."