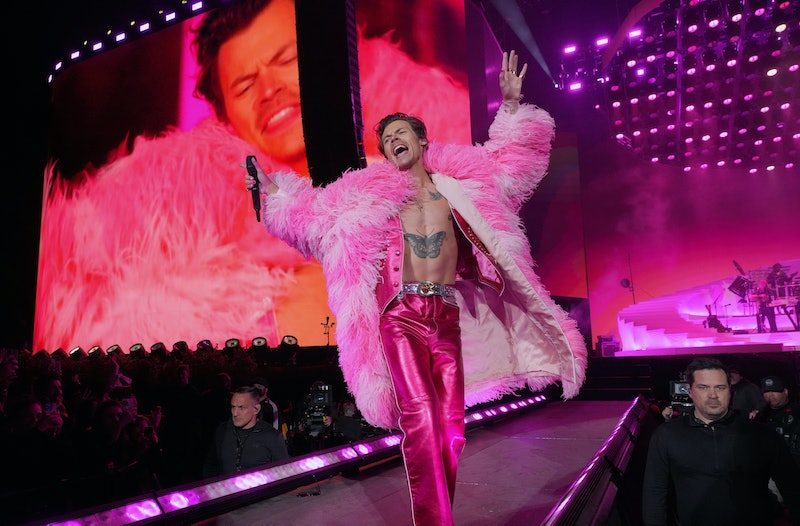 As if last year wasn’t bad enough already – y’know, with the whole lockdown and everything – the final straw was Harry Styles cancelling his victory lap of second album Fine Line. Originally slated for April 2020, his postponed 2021 dates got cancelled, too, leaving fans longing for the live return of their sweet and resplendent prince. Fortunately things are finally looking up, with the star confirming Love On Tour 2022: a massive, 34-date epic. And after seeing Styles grace the Coachella stage in a sequin jumpsuit belting out I Will Survive with Lizzo, twinning in multicoloured Gucci coats, it’s safe to say we’re even more excited for his tour.

And things are looking up still, with the star’s Love On Tour 2022, a massive 34-date epic, right around the corner. The gift that keeps on giving, he’ll also be headlining Radio 1’s Big Weekend and Capital’s Summertime Ball — both firsts since pre-lockdown life. You’ll also notice that our Harold has graduated to some of the biggest venues going – he’s officially a stadium-level superstar for his UK dates.

It’s a good job there’s plenty of room as many of his UK dates have now sold out, with only some VIP packages available to buy. With tickets firmly in the hands of fans, here’s absolutely everything you need to know about Styles’ Love On Tour.

After a three year pause, the Summertime Ball will return to Wembley Stadium on Sunday, June 12, with Styles also headlining the stage. General release launched on Apr. 28 via the Globe Player app only. But more bad news, Capital’s festival has also sold out.

Starting in the summer, the singer’s biggest live outing to date kicks off at Glasgow’s Ibrox Stadium on Jun. 11, before taking him across Europe and South America for the rest on the year. After wrapping up his UK stadium dates, he’ll hop across the Irish sea to play Dublin’s Aviva Stadium. From there, it’s onto arenas across Europe.

After a quick rest-stop after the Lisbon date on Jul. 31 the tour will pick up again in late Nov. with a trio of Mexican shows. The star will also visit Colombia, Peru, Chile, Argentina, and Brazil.

To the delight of UK fans, it was announced on Jan. 27 that Styles has added two additional UK tour dates at the Emirates Old Trafford in Manchester on Jun. 16, and London’s Wembley Stadium on Jun. 19.

Check out the full list of Harry Styles’ Love On Tour dates below. (Plus, extra dates for London and Manchester.)

There’s still limited ticket availability for most dates, but not much. If you still have tickets for a previous date that’s been rescheduled, these are still valid for the new date.

One of the most heartbreaking things about Hazza’s various tour cancellations? Missing out on the incredible crew of artists he’d recruited to join the party: ranging from rising pop-head King Princess and the twisted rock-pop of Jenny Lewis through to Jamaican reggae champ Koffee.

Understandably, not everyone can make it along to the rescheduled tour, but once again the Once-Directioner has pulled it out the bag with his new line-up of support acts. If you’re planning on going to one of the UK stadium dates, prepare to warm up for the Styles by ugly-crying to the cinematic indie of Japanese-American singer-songwriter Mitski. By then, she will have released her forthcoming sixth album Laurel Hell, so you’re in for a real treat.

For the European dates, it’s a Mercury Prize winner-fest, with Wolf Alice and Arlo Parks – who have both won the prestigious songwriting gong in recent years – both joining the bill at various points. Arlo Parks, who also cleaned up at this years BRIT Awards, will bring her debut album Collapsed in Sunbeams to Styles’ Irish stadium show, while London indie heroes Wolf Alice will open for the rest of the European tour dates.

A taste of what to expect from Wolf Alice

No change for the South American dates, meanwhile – with multi-talented singer, songwriter, rapper, and DJ Koffee opening the show.

Well, beady-eyed stans may have noted with keen interest that there’s a quite convenient little tour break before Harry Styles heads off to the European mainland. Coincidentally it happens to overlap with this year’s Glastonbury, which takes place between Jun. 22–26 2022. Could it be quite easy to, say, swoop across to Worthy Farm for a festival slot on Friday or Saturday? It seems plausible.

Look, it’s all just gossip at this point, but if you’re reading this Harry Styles, it’d be rude not to drop by. Plus, he has a five stadium tour across Australia and New Zealand planned for 2023.

This article was originally published on Jan. 21, 2022