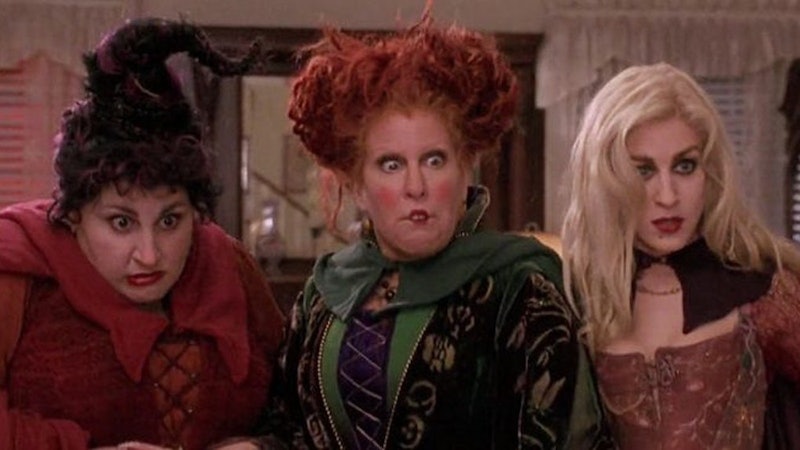 This Halloween looks bleak — how does one trick-or-treat during a global pandemic? — however, some things remain constant, with or without the COVID-19 pandemic: and that's Halloween movies. We may not be able to go outside, but 2020 has given us an almost overwhelming number of ways to stream and watch Hocus Pocus all October long.

As of October 2020, you can stream Hocus Pocus anytime on Disney+. This is the first Halloween that you can literally watch the movie whenever you want, wherever you want, via streaming, given how Disney+ only launched in November 2019, right after spooky season ended. However, if you're one of those people who wants to watch the Sanderson Sisters chase after children the old-fashioned way (aka live on TV while grabbing snacks during commercial breaks), Freeform has you covered.

Hocus Pocus is playing a total of 14 times during Freeform's 31 Nights of Halloween, including twice on the holiday itself. This is actually significantly down from last year, when the network aired Hocus Pocus a whopping 29 times, but given how Disney+ is a thing now, the focus on other creepy classics is understandable. Plus, Hocus Pocus is also available to rent on Amazon Prime Video and iTunes.

Luckily for fans, as long as they survive the next Halloween or two, there will be more than just the original Hocus Pocus to watch this time of year. While speaking with Entertainment Tonight on Sept. 30, star Bette Midler gave an update on the planned sequel to the 1993 cult classic and said that she would "absolutely" reprise her iconic role of Winifred Sanderson. "I can't wait to fly!," she teased, confirming that everything is on track for the sequel to finally become a reality.

Disney announced in October 2019 that the studio was developing a Hocus Pocus sequel for Disney+, with Workaholics producer Jen D'Angelo writing the script and Hairspray director Adam Shankman taking the reins from original filmmaker Kenny Ortega. While the studio hasn't confirmed whether any of the original cast will return for the new film, including Midler's fellow witches Sarah Jessica Parker and Kathy Najimy, Midler told ET that "we're just talking logistics," and both actors have spoken enthusiastically about stepping back into their witchy roles.

"I would love that," Parker said of a sequel during an appearance on Watch What Happens Live with Andy Cohen in August 2016. In the meantime, Parker, Najimy and Midler are set to reunite for a virtual special, "In Search of the Sanderson Sisters," on Oct. 30.