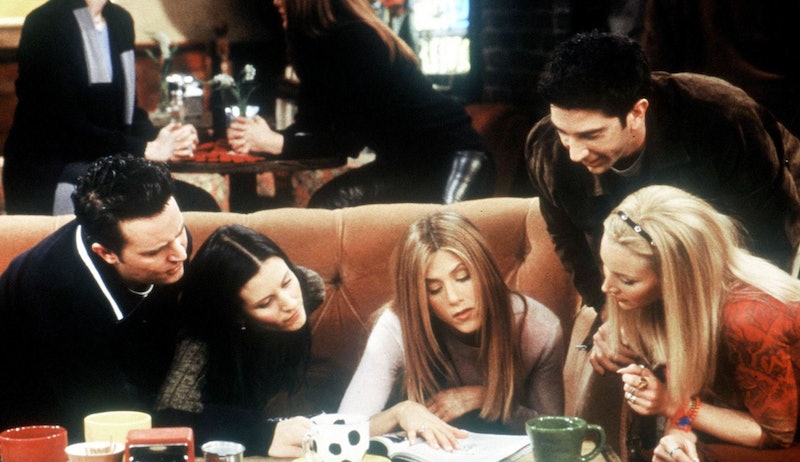 The upcoming Friends reunion is arguably the biggest TV news this side of 2020. With all the original cast getting together after two decades – plus heaps of celebrity guests – this is one show you definitely don’t want to miss. Friends: The Reunion (The One Where They Get Back Together) is set to air in the U.S. on May 27, but undoubtedly Friends fans on this side of the Atlantic are desperate to know how to watch the Friends reunion in the UK.

Announced today (May 21), it has been revealed that Sky One will air Friends: The Reunion on May 27 at 8 p.m. The reunion will also be available via NOW, too.

For the past few months, Bustle has been keeping a close eye on the Friends: The Reunion updates (could we be any more eager?).

HBO Max first confirmed in early 2020 that Jennifer Aniston, Courteney Cox, Lisa Kudrow, Matt LeBlanc, Matthew Perry, and David Schwimmer would be reuniting for the unscripted special. The show’s creators Marta Kauffman and David Crane are on board to host the special, which was originally set to be filmed and aired during the spring of 2020 before COVID interrupted, well, everything.

Ahead of its debut, Courteney Cox spilled some details about the “unbelievable” reunion to Ellen Degeneres. “It was so emotional. It’s an unscripted reunion, but we got to be on Stage 24 for the first time, all of us in, like, I forgot how many years. 15 years? 17 years?” she said.

Cox also confirmed that there were lots of “special surprises” during filming too but kept schtum about other details.

Also joining will be plenty of other celebrities who are, presumably, Friends fans: David Beckham, Justin Bieber, BTS, James Corden, Cindy Crawford, Cara Delevingne, Lady Gaga, Kit Harington, Mindy Kaling, and Malala Yousafzai. It’ll be a packed house — and it all takes place at Warner Bros’ Stage 24 in Burbank, where the show was originally filmed.