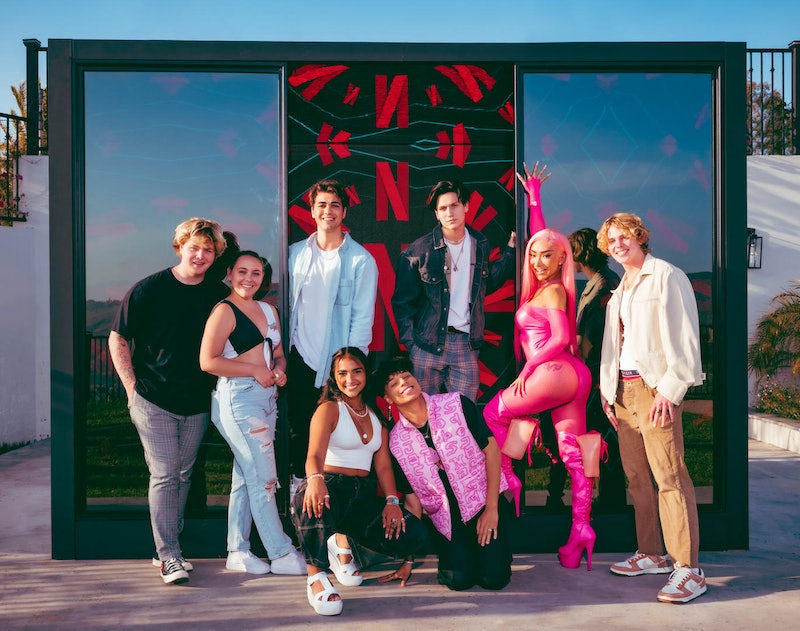 For those who like to scroll through TikTok while watching TV, a new Netflix unscripted series is about to take things to a meta level. The Hype House is getting the reality treatment, following eight of its creators as they “open their lives to the world and show a side of themselves and their relationships we’ve seldom seen,” per Netflix. The lineup of social media stars (collectively followed by more than 125 million people) are already known for their share of drama — but now, a new medium suggests a new approach to their respective lives, careers, and experiences with overnight stardom. Here is everything we know about the Hype House series so far.

Who Will Star In The Hype House Series?

The Hype House is a literal and figurative home to many creators, but not all of them will be starring on the new Netflix project — one notable absence is Addison Rae, who recently talked to Bustle about her busy slate of projects like He’s All That, which just finished filming. Though she hasn’t commented on the new series, it’s possible Rae is simply occupied with other aspects of her career for now, like her rumored reality show.

But there will still be plenty of familiar faces, including Nikita Dragun (who started on YouTube and became a major makeup influencer), Sienna Mae Gomez (a vocal advocate for body positivity), and Chase Hudson, aka Lil Huddy. Kouvr Annon, Larri Merritt, Thomas Petrou, Alex Warren, and Jack Wright round out the cast.

After the series was announced on April 22, the stars took to TikTok to share the news with their followers. Behind-the-scenes footage showed cameras and lights arranged throughout the house, suggesting production is underway now.

Following news of the Hype House series, Warren, who boasts more than 14 million followers on TikTok, told Bustle he feels relieved it’s not a secret anymore. Sharing that the cast and crew have been filming for the last few months, Warren added, “It’s been extremely hard to hide the fact that we’re filming and what we’re doing, but it feels like a weight has been lifted now that it’s all out.” He also teased the series may change perceptions of Hype House. “I think this show is gonna surprise a lot of people, [and feature] things you may [have] never seen of your favorite creator or maybe the creator you absolutely hate.”

What Will The Hype House Show Be About?

According to Netflix, the unscripted series will observe the stars’ rise “from humble beginnings to overnight fame.” It also promises some serious next steps for the creators, watching “as they come into their own, fall in love, and tackle the next stage of their lives.” It is unclear if the Hype House series will address recent controversies the collective has experienced. For example, Nikita was criticized for hosting two parties at the Hype House during the pandemic (one for fellow creator Larray, and one for herself), which maskless guests attended.

But just because the cast is a group of young stars living together in Los Angeles, don’t expect the series to focus on non-stop fun. As Petrou told The New York Times last year, the “whole house is designed for productivity ... This house is about creating something big, and you can’t do that if you’re going out on the weekends.”

Deadline previously reported on an upcoming docuseries called The Hype Life, a collaborative effort between Hype House and Wheelhouse Entertainment (which is producing the Netflix show). It’s possible the just-announced series could be a reworking of that original idea, which Deadline said would highlight everything from “creative endeavors for brands to drama-inducing house meetings and the initiation of new members,” as well as “the sometimes difficult and troubling events that propelled them to TikTok and the bonds they’ve formed with one another.”

When Will The Hype House Series Premiere On Netflix?

While a Hype House trailer has not yet been released, fans of the TikTok collective finally have a release date to look forward to. Hype House will drop on Netflix on Jan. 7.

This post will be updated with additional details as more information on the Hype House series becomes available.