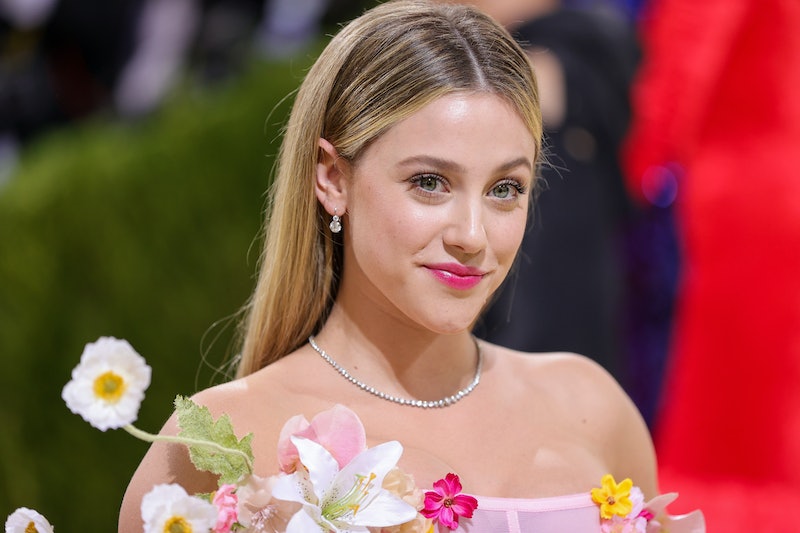 It’s been nearly 14 months since Cole Sprouse and Lili Reinhart’s very public breakup in August 2020, but it seems as though only one of the Riverdale stars has fully moved on and found love elsewhere. Sprouse is currently dating model Ari Fournier and has been for most of 2021. This, of course, is unfortunate for Bughead shippers, who’ve been holding out hope that their favorite TV couple for five juicy and drama-filled seasons would somehow rekindle their romance in real life.

With Season 6 slated to begin in November, Riverdale fans want to know if, like Sprouse, Reinhart has found love again. However, one look at the Hustlers star’s Instagram proves that she is most likely single and focusing on herself right now. In September 2021, Reinhart walked the carpet solo at the Met Gala in New York City, but made sure to make a statement wearing what she called a “beautiful floral-dream dress” by designer Christian Siriano. “Can we have a moment for the train...” she captioned a photo from the extravagant, high-profile event.

The rest of Reinhart’s Instagram is mostly full of glamour shots from magazine photoshoots. “Too hot for you, sorry,” she captioned one photo of herself dipping her feet into a pool for Elle.

In a black-and-white photo from a shoot in March, Reinhart wore a black leotard with feathers and teased her followers with another cheeky caption. “Hey, I’m here to step on your ego,” she wrote. Clearly, Reinhart has been feeling herself these days.

But even if she were dating someone, it’s very likely that she would keep the relationship private. In May 2018, while dating her Riverdale co-star, Reinhart told Seventeen that she’s very selective about what she shares with the world. “It’s called a private life for a reason — it’s mine, and it’s special and sacred,” she said. “My relationships are between me and whomever I’m with, not between me and the world.” Two months later, the Chemical Hearts star told Harper’s Bazaar that she was “not OK talking about my relationship.” “I’m not going to tell you my love story,” she told the publication. “That’s just not appropriate right now.”

Reinhart was first linked to Sprouse in 2017 when they were spotted kissing and holding hands at Comic-Con in San Diego. Over the next few years, the couple went on many elaborate vacations together and walked a number of red carpets. At one point, there were even rumors that Reinhart was pregnant. “It’s unfortunate that one unflattering photo of my stomach circulating the internet causes hundreds of people to think that I’m pregnant,” she wrote on her Instagram Stories in May 2018. “Nope. Not pregnant.”

While dating in the public eye proved to be difficult for the pair, they did gush over one another from time to time. On Valentine’s Day in 2019, the Suite Life of Zack & Cody actor shared a photo of the couple on Instagram and wrote that Reinhart was “the only thing keeping me sane.” The following summer, in the midst of breakup rumors, Reinhart shared a poem for Sprouse in honor of his birthday. “All of these love poems can’t get it right,” she wrote. “No one else’s words could ever fit. They haven’t known the fortune it is to love you.”

In August 2020, Sprouse officially confirmed that he and Reinhart split. “Lili and I initially separated in January of this year, deciding to more permanently split in March,” he wrote in an Instagram post. “What an incredible experience I had, I’ll always feel lucky and cherish that I had the chance to fall in love. I wish her nothing but the utmost love and happiness moving forward.”

It seems that Reinhart is truly happy, and in the end, their split paved the way for her to be open about a part of her life that she never shared before. “Although I’ve never announced it publicly before, I am a proud bisexual woman,” she wrote on her Instagram Stories in June 2020, encouraging fans to join her for an “LGBTQ+ for #BlackLivesMatter” protest. Later that summer, she opened up to Nylon about what inspired her to come out.

“I didn’t want to come out and talk about it because I felt that bisexuality was becoming a trend [among celebrities], but I’ve supported the LGBTQ community since I was a little tween, and it just felt organic,” she told the magazine. “I was like, ‘F*ck it. Now’s the time. It’s not something I'm ashamed of.” The actor made similar comments in an interview with Flaunt, in which she revealed that her close family and friends knew about her sexuality. “I knew full well that I was attracted to women from a young age,” she said.

More like this
Lizzo Calls Beyoncé “The Artist Of Our Lives” During Her Grammys Speech
By Alyssa Lapid
All The Best Celebrity Reactions At The 2023 Grammys
By Brad Witter
The Beyhive Is Mad At Harry Styles After Beyoncé’s Album Of The Year Snub
By Jake Viswanath
9 Photos Of Celebrity Couples & Unexpected Duos At The 2023 Grammys
By Jake Viswanath
Get Even More From Bustle — Sign Up For The Newsletter
From hair trends to relationship advice, our daily newsletter has everything you need to sound like a person who’s on TikTok, even if you aren’t.