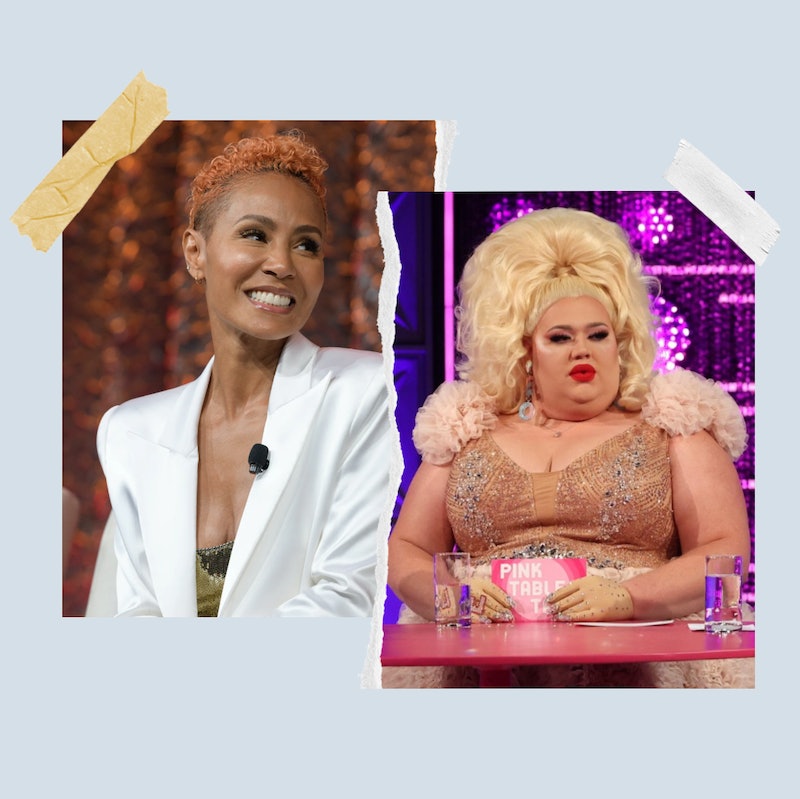 For the main challenge in the most recent episode of RuPaul’s Drag Race All Stars 6, the remaining queens had to dig deep, be vulnerable, and bring something extremely personal to the table — the pink table, that is. The episode, titled “Pink Table Talk,” was a spoof on Jada Pinkett Smith’s incredibly popular Facebook Live talk show Red Table Talk, and the mastermind who inspired it all didn’t mind the Drag Race homage. In fact, she gave both the program and the top queens a personal shout-out.

“I LOVE @rupaulsdragrace! We have been fans since day 1! Ladieeees … ya’ll kill’t the Pink Table Talk challenge this week,” Pinkett Smith wrote on her Instagram post, which featured videos of two of the three competing Drag Race teams. The Red Table Talk host continued to show the love by specifically calling out the three members of the top team, as well as the queen who RuPaul picked as the week’s winner, who was selected from another team as a standout. “Congrats to @eurekaohara, @trinitykbonet and @mizakeriachanel for winning the Pink Table Talk challenge💗 And congrats to @gingerminj who was the top All Star this week✨Any contestant that has ever stepped foot on the RuPaul’s Drag Race stage is a winner in my eyes❤️‍🔥😘”

Throughout the episode, the queens opened up about tough issues and difficult experiences from their past, making it both an entertaining and heart-wrenching showing. Ginger Minj revealed that when she was younger she had extreme intestinal issues that had long-lasting effects on her health, A’Keria C. Davenport opened up about formerly living as a trans woman, and Eureka proved she clearly isn’t afraid to discuss what it’s like finding men who appreciate her for her size versus those who fetishize her weight. Trinity K. Bonet, who opened up about living with HIV, reacted to Pinkett Smith’s Instagram post on Twitter.

While she has never appeared on Drag Race before, Pinkett Smith has been a fan of the show for a long time, as she mentioned in her caption. Several years ago, she congratulated Trixie Mattel on earning the crown on All Stars 3, proving she’s been watching for years. She was also name-dropped way back in Season 3 when the queens took to a thrift store and Shangela insisted the other shoppers assumed she was Jada.

It’s been a very good few days for Pinkett Smith, and she has a lot to celebrate recently. The mother of Willow and Jaden collected an Emmy as a producer on Red Table Talk in the Outstanding Informative Talk Show category. She has been nominated several times before, including alongside her daughter, but this is her first win.

Pinkett Smith has made it clear that she adores all things Drag Race, and producers have shown that the feeling is mutual, so will the star become a guest judge on the next season? Audiences would love that, and it sounds like Pinkett Smith (and maybe even the rest of her family) would as well.