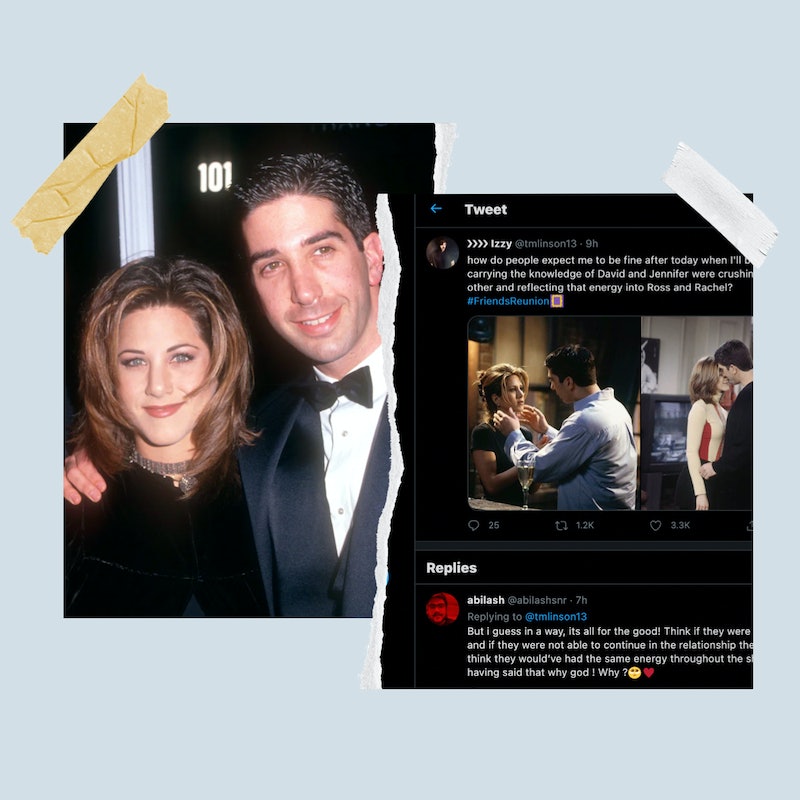 Not only did HBO Max’s Friends reunion special include more tears from the cast than we can count, it also featured a few jaw-dropping bombshells about their on-set friendships. Jennifer Aniston and David Schwimmer revealed they had real feelings for each other while filming Friends in the ’90s, and the memes and tweets about their alleged relationship prove that fans are even more emotional about it now than the actors were back then.

After host James Corden asked the cast whether they engaged in some “hanky panky” behind the scenes, Schwimmer admitted that he had a huge crush on Aniston during the first season, before she revealed that “it was reciprocated.” Schwimmer went on to explain that they were “crushing hard” on each other at one point, but nothing ever happened out of respect for each other’s current relationship. “It was like two ships passing because one of us was always in a relationship and we never crossed that boundary,” he said. “We respected that.”

Instead, both actors made the decision to channel their mutual crushes into the rollercoaster relationship between their two characters, with Aniston saying that she regretted how their first kiss was on camera. “I just remember saying one time to David, ‘It's going to be such a bummer if the first time you and I actually kiss is going to be on national television’,” she quipped. “Sure enough, first time we kissed was in that coffee shop. So, we just channeled all of our love and adoration for each other into Ross and Rachel.”

Of course, fans immediately got emotional knowing that the passion between Ross and Rachel was a reflection of the actors’ real-life chemistry. They took to Twitter to cry it out.

Fans also applauded how Aniston and Schwimmer’s castmates knew all along. During the reunion, Schwimmer said he was amazed that no one caught on to their crushes, recalling how he and Aniston would cuddle up on couches during breaks, before Matt Leblanc retorted, “We knew for sure.” Even Courteney Cox couldn’t believe their chemistry in that fateful first kiss. “That scene in the coffee house, their first kiss, I was watching it the other day and I was weeping at the end of it,” she said. “The tension, it was just palpable, it was just perfect.”

While most fans simply just cried over the news, others couldn’t resist providing the perfect reactions memes, because who can resist?

But of course, the top question on fans’ minds was if there was still a chance for a Davifer romance, mourning that it never happened in the first place. During the show’s run, Aniston went on to marry Brad Pitt (a.k.a. the other member of the “I hate Rachel” club formed by Ross) before their infamous 2005 split, while Schwimmer eventually married British artist Zoë Buckman in 2010.

However, while both stars remain quiet about their love life, they are currently single as far as fans are aware, with Schwimmer having gotten a divorce in 2017. There’s nothing like a class (or in this case, cast) reunion to put two long-lost souls back together again.