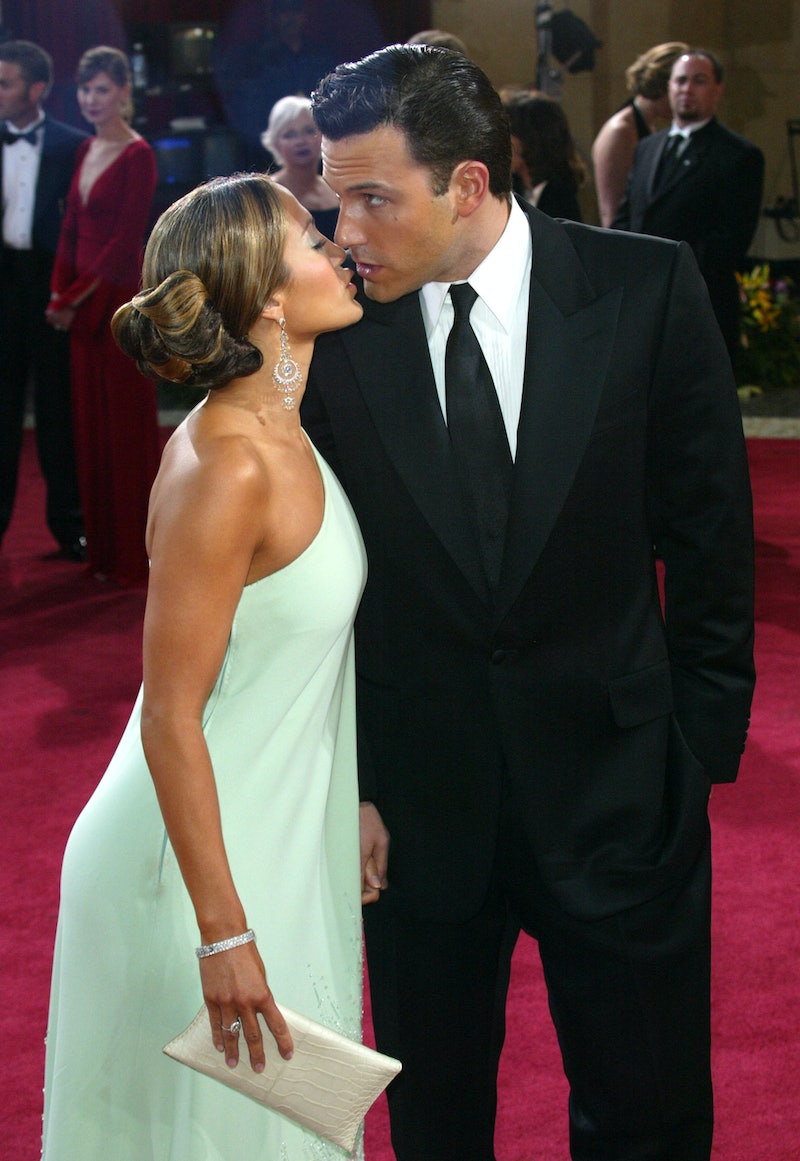 It seems that Jennifer Lopez and Ben Affleck are ready for the next phase of their rekindled romance: PDA. On May 24, the rumored couple — who appears to be back on 17 years after calling off their wedding — was reportedly spotted kissing in J.Lo’s Miami gym, Anatomy Fitness. The pair worked out with separate trainers, but they “were not trying to hide their relationship by any means,” according to Entertainment Tonight. In other words, they were all over each other, just like they used to be in the early 2000s at film sets, award shows, and other public events.

“They stayed close to each other while working out and were hugging, being playful together, and shared a kiss in between sets,” ET’s source said. “It was clear to everyone that they have intense chemistry and were having fun together.” Us Weekly and InTouch also reported that the pair snuck in some smooches while working out, and the latter reached out to the gym for comment but hasn’t received a response.

If the reports of Bennifer’s gym PDA are true, it wouldn’t be that shocking. On May 24, Daily Mail reported that Affleck flew to South Florida to be with the “Dinero” singer shortly after their vacation in Montana. Amid their trip to the Yellowstone Club, E! News said they were spending time “just the two of them” and that their reunion didn’t come out of nowhere. “They have always stayed in touch and had a strong connection,” a source said. “She finally has had the opportunity to spend time with him and see where this could lead. They are very comfortable together and it’s easy. She wants to keep seeing him and is very happy.”

Reports surfaced that the exes were seeing each other again just two weeks after J.Lo and former MBA star Alex Rodriguez announced their split. Per Page Six, the Oscar winner was spotted at the singer’s home multiple times, and he was also photographed getting out of her white Escalade SUV. “They have been in touch here and there throughout the years,” a source told E! News when the reports first surfaced. “Ben reached out to her to see how she was doing and they had dinner together a few times within this last month.”

This was very exciting news for longtime Bennifer shippers. The two initially started dating in July 2002 after meeting on the set of Gigli. In November of that same year, they got engaged. But alas, the pair called off their engagement in 2003, the day before they were set to walk down the aisle. “Due to the excessive media attention surrounding our wedding, we have decided to postpone the date,” they said in a statement at the time, adding the unwanted attention would cast a negative shadow on their big day. In January of that same year, they officially called it quits.

Despite all these years apart, E!’s insider said that J.Lo and Affleck’s “chemistry is unreal” and that their relationship is totally “natural.” “They picked up where they last left off and are enjoying each other’s company right now,” they added. The outlet also reported that Lopez is not even considering getting back together with A-Rod. “She’s not interested in rekindling anything with A-Rod and is done,” an insider said, adding that the “Love Don’t Cost A Thing” singer “always wondered what could have been” with Affleck. “The timing was never right and they were in different places until now.”