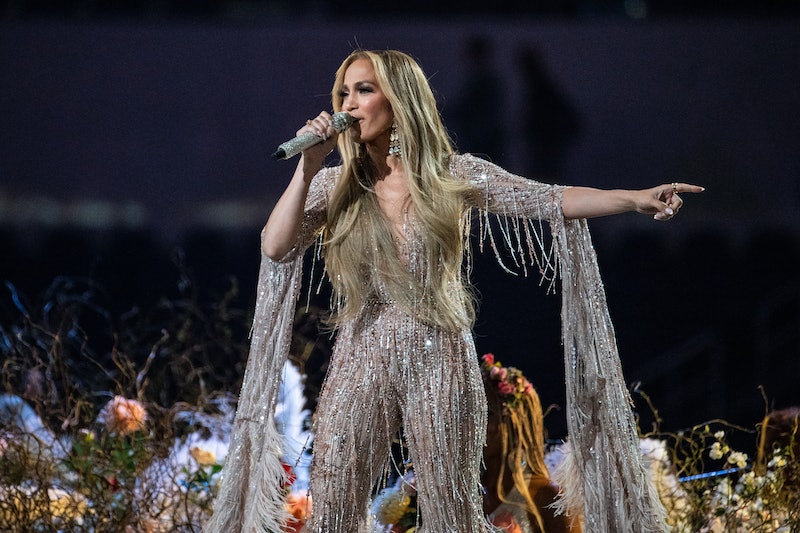 The days of J. Lo and A-Rod are over and Bennifer is back, so it’s fitting that the singer’s new song is all about change. As a guest on Pitbull’s SiriusXM radio show on Thursday, July 1, Jennifer Lopez opened up about “Cambia El Paso,” her track whose title translates to “change the step.” The pop star noted that the message is about “change and not being afraid to take the step.”

“Just take the step, advance, do what you need to do,” she said, per Us Weekly. “If something’s not feeling right, whatever it is in your life, like, just make that move and dance.” She went on to note that the lyrics focus on dancing, but she’s “talking about something else.”

Lopez also started teasing the song on Instagram in the leadup to its July 5 release, sharing what seem to be lyrics in her caption, including, “Ella vive su vida … como un tango … pero ahora quiere fuego … entre sus labios,” which translates to, “She lives her life … like a tango … but now she wants fire … between her lips.” Later, on July 1, she posted a “sneak peek” making it clear how important the song she made with Rauw Alejandro is to her. “Tan emocionada por #CambiaElPaso,” she wrote in part, explaining that she’s “so excited.”

J. Lo’s big change famously came when she and then-fiancé Alex Rodriguez announced their split in a joint statement to Today on April 15. Though they noted they “are better as friends” and will “continue to work together and support each other” on projects, things got a little awkward when Rodriguez posted a video to his Instagram stories of him showing off photos of the couple while Coldplay’s “Fix You” played in the background. He also tagged Lopez. Shortly thereafter, she reportedly liked a post with a quote from author r.h. Sin that fans thought was very telling: “Don’t make her think you care when you have never given a f*ck about her.”

From there, Lopez seemed to fully embrace change, sparking rumors of a reconciliation with another former fiancé, Ben Affleck, when he was seen in her SUV in late April. By mid-May, a source was telling Us Weekly that “things [were] moving in a romantic direction,” and the two had reportedly enjoyed time together in Montana. Meanwhile, Rodriguez was “shocked” by the development, as a source told E! News, adding, “He truly thought they would be able to make it work and reconnect.” By late May, though, he, too, seemed to have decided to change the step and even posted an Instagram story saying he was “about to step into a new beginning.”

“Cambia El Paso” drops on July 5, so fans will soon have more lyrics to analyze.

More like this
Harry Styles Just Split His Pants In Jennifer Aniston’s Face
By Sam Ramsden
Linda Ronstadt’s “Long Long Time” Plays A Pivotal Role In The Last Of Us
By Brad Witter
The Meaning Of Steve Lacy’s “Bad Habit” Lyrics
By Radhika Menon
9 Photos Of Celebrity Couples & Unexpected Duos At The 2023 Grammys
By Jake Viswanath
Get Even More From Bustle — Sign Up For The Newsletter
From hair trends to relationship advice, our daily newsletter has everything you need to sound like a person who’s on TikTok, even if you aren’t.