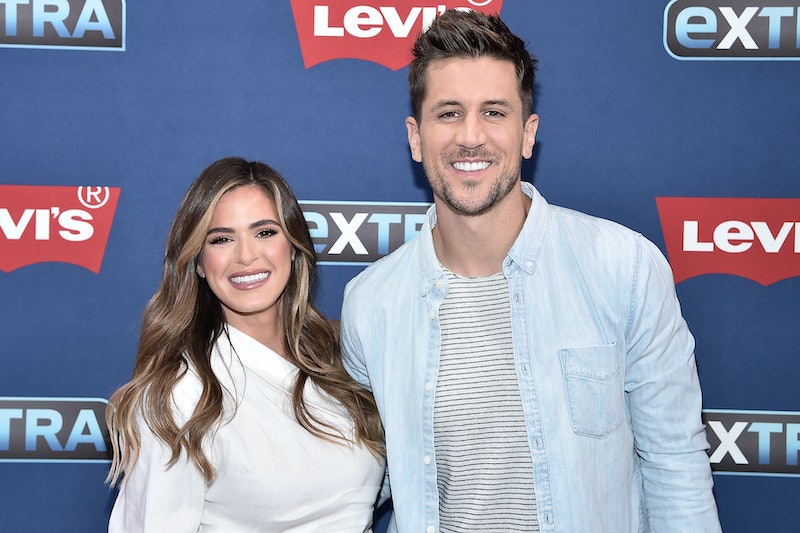 Those rumors about Tayshia Adams replacing Clare Crawley halfway through this season of The Bachelorette may have been shocking, but one former Bachelorette promises it's just the tip of the iceberg. During a recent interview with Us Weekly, JoJo Fletcher said the Clare and Tayshia Bachelorette "shake-up" isn't the only twist this season, and teased that there will be even more drama to come.

The TV personality — who briefly filled in for Chris Harrison as host in August — revealed that she was shocked by what was really happening behind the scenes when she arrived on set. "I will tell you this: when I got the call, I didn’t know what was going on. I had no clue," JoJo said, before referencing the reports that Clare left The Bachelorette just a few weeks into filming. "I was seeing the rumors you guys were seeing and when I got there, I got the rundown and it was nothing like I was seeing."

In early August, multiple outlets reported that Tayshia would replace Clare as the Bachelorette after the latter fell in love with one of her contestants — football player-turned-model Dale Moss — early on, and decided not to lead on any of the other men. Clare and Dale's strong connection was evident from the very start, when she declared that she had "just met my husband" after he stepped out of the limo; based on promos for upcoming episodes, many of the other men were upset that Clare was spending more time with Dale than anyone else, leading to several of them threatening to walk off the show.

Though she didn't share any details about what, exactly, went down at the Palm Springs resort where Clare's season was filmed, JoJo did seemingly confirm the Bachelorette switch-up. "There were a lot of other things happening, a lot of rumors that were not true," she said. "It’s unlike any other season for a number of reasons. Obviously, the circumstances, obviously there’s a shake-up. What that shake-up is and how it plays out and what actually goes down, I think people will be very excited to watch and see."

The former Bachelorette also talked about her experience filling in as host for Harrison, who left the show's quarantine "bubble" in order to take his son to college. "I was obviously super excited that they would even think of me to do that or trust me to do that, but definitely nervous," JoJo told the outlet. "I mean, Chris makes it look incredibly easy because he’s really good at his job, you know? I feel like I did my best. I try to stay within the lines of like being, you know, doing Chris Harrison’s job in his role, but I’m never going to be Chris Harrison."

JoJo's stint as Bachelorette host came a few months after she and fiancé Jordan Rodgers — whom she met and got engaged to on the show in 2016 — had a shake-up of their own. They announced that they had to postpone their June wedding due to the ongoing coronavirus pandemic. "We would never sacrifice that day to just rush and get it done. So, if it can't happen the way we want it to happen, we'll do it when we can," JoJo told Entertainment Tonight at the time. "It's been four years, so what’s another year?"

"Happy 'What would have been Wedding Day' to us!" JoJo wrote on Instagram on June 13, the couple's original wedding date. "As you guys know, we have spent the last 11 months planning the wedding of our dreams but given the circumstances of 2020, we had to make the difficult decision to postpone our special day. Even though I don’t get to marry you todayyyyy [Jordan,] I know it will be all more worth the wait."

Her plans may be on hold, but at least she's giving us hints about what to expect on The Bachlorette in the meantime.