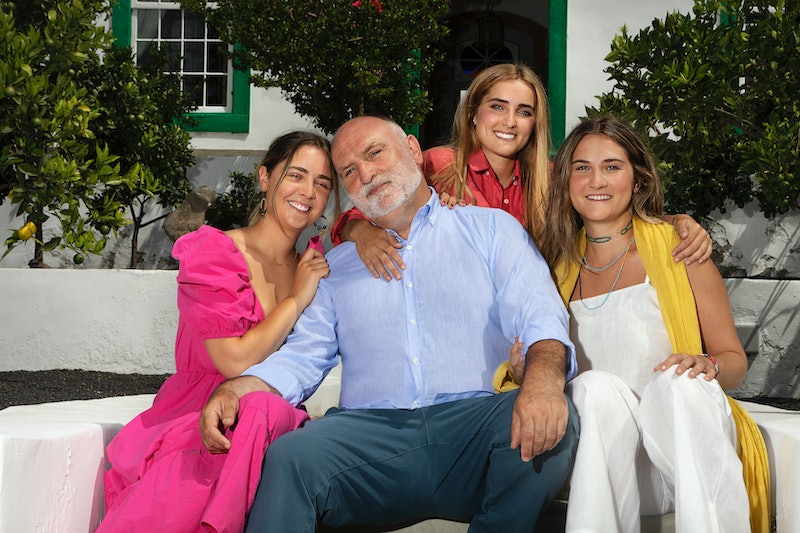 Picking something to watch with the family over the holidays isn’t always the easiest task — but fortunately, a new Discovery+ docuseries about food, family, and travel might just be the crowd-pleasing fare you’re looking for. José Andrés and Family in Spain follows the titular, world-renowned chef on a culinary journey through his home country. The six-part series will see Andrés explore destinations such as Barcelona, Madrid, and Lanzarote, learning about local food while also making time for new experiences along the way, like paragliding or milking goats.

Andrés was born and raised in Spain, so he definitely doesn’t need any help navigating the terrain. He will, however, be joined by his three daughters — Carlota, Inés, and Lucia — who were born in the United States. “My daughters have heard endless stories about the people, places, and food that shaped me as a young man, but we got the chance to go visit, meet and taste everything together,” Andrés said in a statement. “There is no better way to learn about Spanish culture than with a fork and spoon in hand.”

Even if you aren’t familiar with Andrés by name, you’ve likely dined on food that’s been shaped by his influence — like tapas, for example.

According to NPR, Andrés’ work at Jaleo in Washington, D.C. helped tapas achieve their popular reputation stateside — while promoting Spanish cuisine as a whole, too. He’s also the founder of the World Central Kitchen, which works to feed people affected by global emergencies and natural disasters. To give you an idea of its scale, Meghan Markle and Prince Harry announced that they’d be partnering with the organization in 2020.

“We need to weaponize empathy ... we have an opportunity, and food is at the heart of this,” Andrés told Anderson Cooper at the beginning of the pandemic. “To make sure that we actually don’t [just] close the gap, but we come out stronger.”

So, how can you watch José Andrés and Family in Spain this holiday season? The new six-part docuseries will start streaming on Discovery+ on Dec. 27 — making it a perfect pick for that cozy, liminal week leading up to New Year’s Eve.

You can also keep up with Andrés via his TikTok account or his podcast, aptly titled Longer Tables, where he’s had conversations with notable figures ranging from Stacey Abrams to Martha Stewart.

More like this
A Guide To All Of Zach Shallcross' 'Bachelor' Filming Locations
By Brad Witter
Everything To Know About 'The Real Housewives Ultimate Girls Trip' Season 4
By Jake Viswanath
Andy Cohen Apologized To Larsa Pippen After A 'RHOM' Season 5 Reunion Dust-Up
By Brad Witter
Love Is Blind’s Natalie Claims Shayne Signed Up For 'Perfect Match' While They Were “Still Together”
By Brad Witter
Get Even More From Bustle — Sign Up For The Newsletter
From hair trends to relationship advice, our daily newsletter has everything you need to sound like a person who’s on TikTok, even if you aren’t.