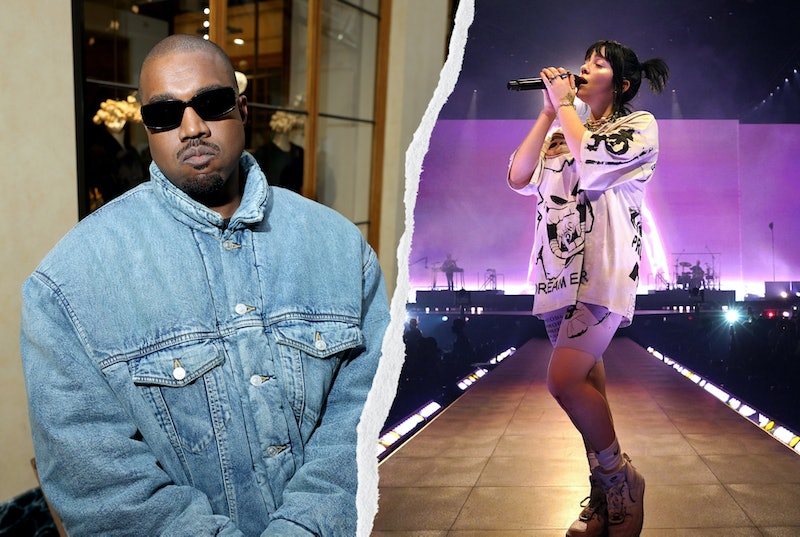 Just two months away from Coachella, and two of the festival’s headliners are having some drama. (At least, one of them is trying.) It all started when Billie Eilish noticed a fan was having trouble breathing in the busy pit of her Feb. 5 Happier Than Ever show in Atlanta. As TMZ reports, she told the crowd to back up as her crew helped get an inhaler to the fan. “I wait for people to be OK before I keep going,” she said, an apparent reference to Travis Scott and the deadly crowd crush at Astroworld on Nov. 5, during which the “SICKO MODE” singer kept on performing.

Kanye West was offended on Scott’s behalf and took to Instagram to demand an apology from Eilish. “COME ON BILLIE WE LOVE YOU,” he wrote. “PLEASE APOLOGIZE TO TRAV AND TO THE FAMILIES OF THE PEOPLE WHO LOST THEIR LIVES.” West, aka Ye, said, “NO ONE INTENDED THIS TO HAPPEN,” and that “TRAV DIDN’T HAVE ANY IDEA OF WHAT WAS HAPPENING WHEN HE WAS ON STAGE AND WAS VERY HURT BY WHAT HAPPENED.”

Later in his message, West said Scott would be with him at April’s Coachella — even though Scott was dropped from the lineup after Astroworld. But then, West dropped an apparent ultimatum: “NOW I NEED BILLIE TO APOLOGIZE BEFORE I PERFORM.”

Don’t expect an apology from Eilish anytime soon, especially considering the fact that she never actually mentioned Scott by name. “Literally never said a thing about Travis,” she commented on West’s post. “Was just helping a fan.”

Since Astroworld, Scott said he would’ve done the same, too, but maintains he “didn’t hear” the crowd’s screams for help at his November show. “Anytime you can hear something like that, you want to stop the show, you want to make sure fans get the proper attention they need,” he said in a conversation with Charlamagne tha God one month after the tragedy.