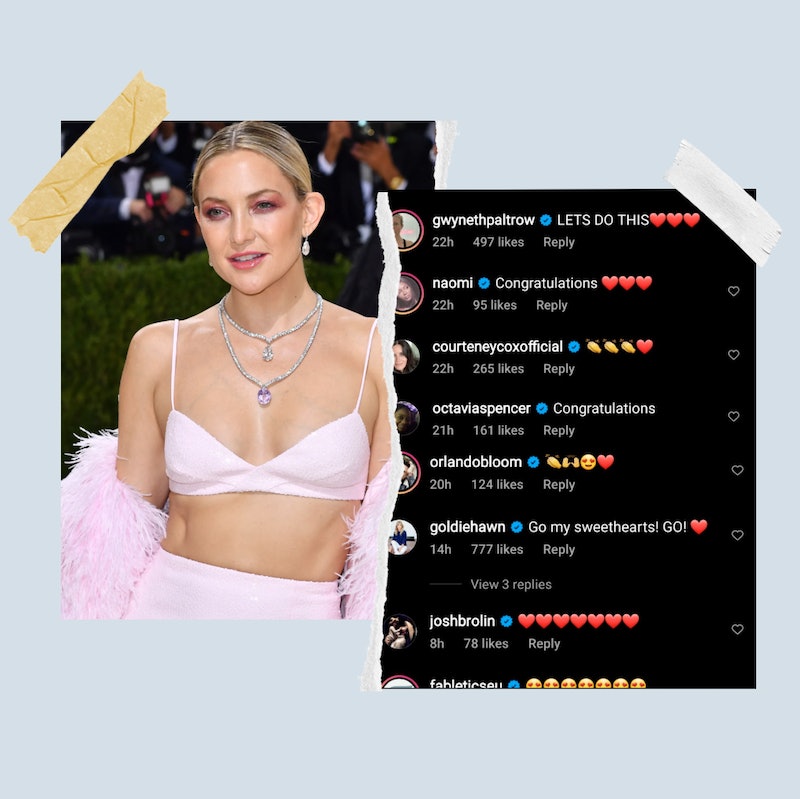 Kate Hudson knows How to Lose a Guy in 10 Days, but it seems like she’s found a keeper. The 42-year-old movie star announced her engagement to boyfriend Danny Fujikawa on Instagram right before the Met Gala on Sept. 13, and celebs’ responses to her engagement post seemed to hype her up for the big event in New York City, where she wore a pink Michael Kors outfit.

Hours before the Met Gala, Hudson announced her big news by posting a photo of her locking lips with Fujikawa and showing off her engagement band while in front of a gorgeous ocean view. “Let’s go!” she captioned the photo, along with bride, groom, and church emojis. Immediately, stars and famous family members started sharing joy for the couple in the comments section. Gwyneth Paltrow agreed with Hudson, saying “LETS DO THIS,” while Courteney Cox commented with applause emojis. Naomi Campbell and Octavia Spencer, who also left a comment on Britney Spears’ engagement post, wrote “Congratulations” for Hudson and Fujikawa.

Fujikawa’s stepsisters Sara and Erin Foster welcomed Hudson into the family, with Sara hinting they’ve been keeping the engagement under wraps for some time. “Not gonna lie, been a hard secret to keep,” she wrote “I may have slipped and told a few people.”

But most touchingly, Goldie Hawn, Hudson’s famous mother, left a comment that showed her elation for the couple, writing, “Go my sweethearts! GO!”

Later that night, Hudson walked the red carpet at the Met Gala in a pink sequin bra, matching floor-length skirt, and an extravagant feather coat designed by Michael Kors. But of course, the true star of her night was the stunning rock on her finger.

Hudson and Fujikawa have been dating for nearly five years, but as she wrote on Instagram in December 2017 on their “first date anniversary,” they met when she was 23 years old and pregnant with her first child, son Ryder Robinson. They “ran in the same circle for over a decade,” thanks to her friendship with the Foster sisters, before starting to date in 2016. “Danny took me on a hike and what I thought was just a hike with a family friend turned very quickly into an unexpected first date,” she wrote. “So on our 15th year of knowing each other we were able to open our hearts to each other to feel so much pure love and it’s been truly incredible!”

The couple welcomed daughter Rani Rose Hudson Fujikawa in October 2018, marking Hudson’s third child and Fujikawa’s first. The Almost Famous star also shares son Bingham Hawn Bellamy with ex-fiancé Matthew Bellamy. The next year, Hudson predicted that her and Fujikawa would “probably” wed at some point. “Marriage is definitely not a golden ticket — it’s not going to solve any challenges in a relationship,” she explained to The Telegraph. “But as someone who’s lived through ... well, trial and error, I think that the symbolism of marriage, that commitment, is more important to kids than we sometimes think.” It looks like she’ll find that out soon.