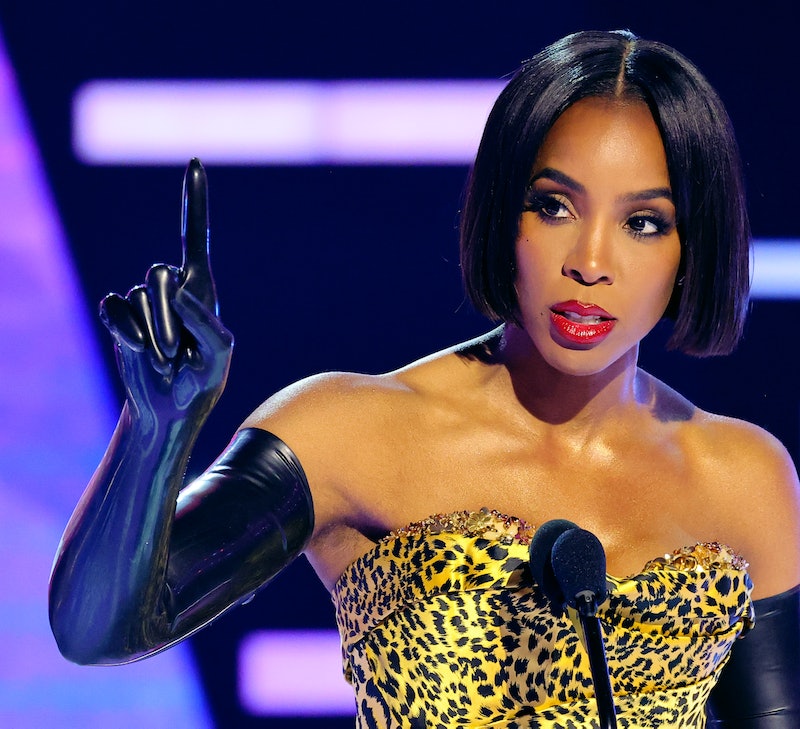 Trigger Warning: This piece contains mentions of domestic violence. The American Music Awards spectators were very divided over Chris Brown. On Nov. 20, presenter Kelly Rowland defended Brown at the 2022 AMAs following his win for Favorite Male R&B Artist, after organizers reportedly canceled his planned performance. After the Destiny’s Child alum read his name as the winner, audience members who are well aware of his controversial past and legal troubles broke out in boos and groans.

“Excuse me, chill out,” she responded, before proceeding to send her love to Brown and accept the award on his behalf. “I wanted to tell Chris, thank you so much for making great R&B music and I want to tell him thank you for being an incredible performer. I’ll take this award [and] bring it to you. I love you. Congratulations. And congratulations to all the nominees in this category.”

Two days later, in a video captured by TMZ on Nov. 22, Rowland responded to Brown’s critics after a reporter asked how she felt about him being “bullied” by the AMAs crowd. “You know what? I believe that grace is very real, and we all need a dose of it,” she said. “Before we point fingers at anybody, we should realize how grateful we are for every moment that we get, for even our own things that we have. I just think it’s important to remember to be human. We are humans.”

When the TMZ reporter asked if Brown “deserved” to be forgiven for his actions, the singer said that everyone deserved forgiveness. “You know what, we all need to be forgiven for anything we could be doing, anything that we’re thinking,” she remarked. “We all come up short in some sort of way... and we are humans. Everybody deserves grace, period.”

Brown was reportedly scheduled to perform a tribute to Michael Jackson at the awards ceremony to celebrate the 40th anniversary of the late singer’s milestone album Thriller, which includes hits like “Billie Jean,” “Beat It,” and “Thriller.” The tribute reportedly incorporated Brown’s song “Under the Influence” somehow. While it was never announced by the AMAs producers or ABC, Brown said the performance was canceled without any given reason on Instagram. “U serious?” he captioned a video filmed during rehearsals. In the comments, he added, “Would’ve been the [biggest] AMA performance but they canceled me for reasons unknown.”

Brown has been a divisive figure in the entertainment world since he pleaded guilty to a felony assault charge after hitting his then-girlfriend Rihanna the night before the 2009 Grammys. This preceded a slew of violent incidents, including a 2015 misdemeanor stemming from an assault charge, a 2016 Las Vegas nightclub altercation in which a woman accused him of punching her in the face, and a 2017 restraining order that his then-girlfriend Karrueche Tran was granted against him after Brown threatened her during their breakup. Most recently, police responded to a domestic argument at Brown’s home in June 2021 after he allegedly hit a woman, but charges were not filed.

This is not the first time that Rowland has praised Brown. In July 2019, he was criticized for a blatantly colorist lyric on his recent album Indigo. At the same time, she left a nice comment on his Instagram, which she said was taken out of context as she was not aware of the controversy. “I think I commented on something about him breaking a hit record or something and I was like, ‘Oh my gosh, love you, Chris.’ That was it,” she explained to BuzzFeed News. “We’re so quick to crucify each other when we don’t know the backstory of anything, so we also have to be careful of things like that as well.”

This article was originally published on November 21, 2022